I'm looking at several new visualization features in SQL Server 2008 R2 Reporting Services and the data bar looks like something that I could really use. Can you provide an example of how to use this in a report?

The data bar is a new visualization that essentially provides a bar chart within a single cell in a report. This enables you to easily compare the data in one row to another based on the relative length of their data bars.

In this tip I will walk through creating a report that uses a data bar. As an example I will create a simple report using Report Builder 3 which is available on the SQL Server 2008 R2 Feature Pack site.. A preview of the report is shown below: 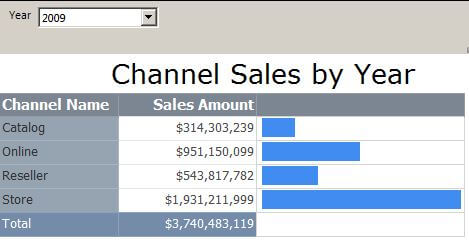 My report will use the ContosoRetailDW database and show channel sales for a given year. I will use the following query in the report:

To create a new report choose the Table or Matrix Wizard in Report Builder, create a data source, a dataset (i.e. the query above), then add the columns to the matrix as shown below: 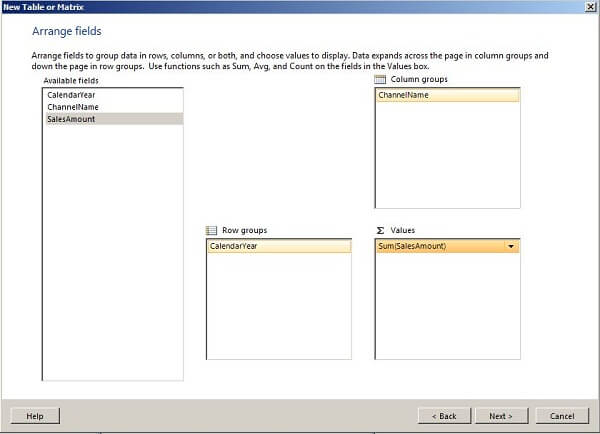 Note that this gives us calendar years on the rows, channel names on the columns, along with the total sales. To add a data bar to the report, click the Data Bar on the Insert tab as shown below then click in the report cell where you want to render the data bar:

After clicking in the cell where you want to add the data bar, you'll be prompted to choose the data bar type; select the Data Bar as shown below:

After choosing the data bar, the report designer will update and show the following layout:

Double click inside the cell where you added the data bar to show the Chart Data dialog as shown below:

Click on + and select SalesAmount from the available options; the data bar will render based on the Sum(SalesAmount) as shown below:

At this point the report is ready to run and the output is shown below:

The data bar allows us to visually compare the total sales of one channel relative to another.

Now let's do another report and show a different type of data bar. I'll use a slightly different query that shows sales grouped by year and channel:

The report will show years on the rows and channels on the columns. Instead of a single data bar, I'll have one for each channel. Here's the report layout in the designer:

When I selected the data bar, I picked the Data Column instead of the Data Bar as shown below:

Double click inside the cell with the data bar to show the Chart Data dialog and fill it in as shown below::

Note that ChannelName has been added to the Category Groups; essentially the data bar is rendering the sum of SalesAmount for each ChannelName. The report now looks like this:

Note the four vertical bars (one for each ChannelName) versus the single horizontal bar in the first report.