Do you want to leverage your dataset and SQL scripting skills for data science projects? Well, this tip is one place for you to start doing just that. An article on the DataCamp website motivated this tip; the DataCamp website is a tutorial and training resource for data science development skills. The article featured an introduction to contingency tables using the popular R language with the Chi Square test and other statistical tools. This tip aims to illustrate how you can create contingency tables and analyze them with a SQL script and the Chi Square test. A major goal of the tip is to illustrate one way to leverage SQL scripting in a typical data science project.

Both R and Python scripting environments feature much built-in functionality to facilitate data science projects, but they are not especially well endowed with relational database management features. On the other hand, SQL, as implemented by Microsoft with SQL Server and other leading SQL database providers, offers outstanding data management features and basic scripting capabilities that can be applied within data science projects. Using SQL instead of R or Python can make sense – especially when the data for a project are already stored (or destined to be stored) in a SQL database.

What is a contingency table?

The contingency table consist of the cells with counts in them; the table normally appears with row and column labels. The row of column label values with Column 1 through Column n denote one set of discrete variables. The row label values with Row 1 through Row n denote a second set of discrete variables. Notice that each cell with a count in it also has two subscripts, such as count r1,c1 and count rn,cn; these cells represent the count or frequency of observations at the intersection of column category variables and row category variables. The number of columns does not have to equal the number of rows so, for example, a contingency table could have n rows and m columns where n is not equal to m.

What is a Chi Square test for a contingency table?

There are two types of Chi Square tests for contingency tables.

The Data Science with SQL Server for Inferential and Predictive Statistics: Part 2 tip includes a layout for computing expected values based on the independence of row and column category variables. This layout is duplicated below for your easy reference. As you can see, the expected value for a cell is the product of the row sum for a cell and the column sum for a cell divided by the grand count across all cells. Notice that cells in the following table of expected values have the same layout as the observed values in the contingency table.

Even though the sampling plan (or how you collect data) for each kind of test is different, the computational details are the same for both the test for independence and the test for homogeneity. There is a restriction regarding the count per cell that is variously expressed in different sources (here, here, and here). For example, it is sometimes indicated that the minimum observed count must not be less than five. Other sources indicate that no more than twenty percent of the expected counts can be less than five. This tip does not take a position about the count per cell. If your contingency table does not conform to a set of minimum requirements or you cannot re-group the categorical data to conform to a set minimum count requirements, then you can consider another type of test instead of the Chi Square test.

The computed Chi Square value is based on the squared difference between each cell's observed and expected values divided by the cell's expected value summed across all cells in the contingency table. Wikipedia demonstrates the application of this approach to calculating a computed Chi Square value for categorical data from a contingency table in the "Example chi-squared test for categorical data" section of its Chi-squared test page.

The critical Chi Square values for any degrees of freedom and statistical probability level can be derived from Excel's CHISQ.INV.RT function. MSSQLTips.com has multiple tips describing how to populate a SQL Server table of critical Chi Square values from the CHISQ.INV.RT function (for example, see the "Introduction to Goodness-of-fit Chi Square test" section in the Using T-SQL to Assess Goodness of Fit to an Exponential Distribution tip).

The table of critical Chi Square values for this tip resides in the Chi Square Critical Values 05 01 001 table of the AllNasdaqTickerPricesfrom2014into2017 database. The table is populated from an Excel worksheet with CHISQ.INV.RT function values imported into the SQL Server table. You can import the Excel worksheet, which is available as a download with this tip, to populate a SQL Server table in any database of your choice. The following screen shot shows an excerpt from the full table. The excerpt shows that critical Chi Square values increase with increasing degrees of freedom and statistical probability levels that are progressively rarer. 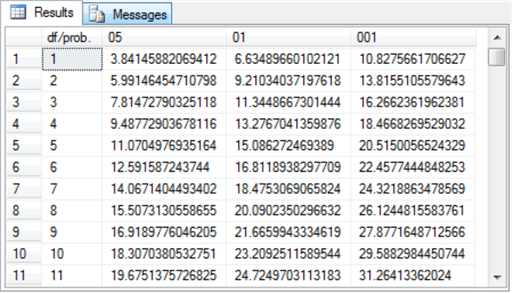 The data for the contingency table

This tip uses the Cars93 dataset that ships with the R programming language package. This dataset has one row per make (comprised of a manufacturer and a model) with a top row of field names. This dataset is available from numerous sources; this tip demonstrates how to import the dataset into SQL Server from this source. When you click a link labeled "download this file" from the source, a csv file downloads to your computer, but the file has a non-standard format relative to typical Windows csv files. The following screen shot shows an excerpt from a Notepad++ session with the file after some minor editing. The editing removed double quote marks around field values in lines 2 through 94 and added ID as the first field name to line 1.

The field and row terminators are, respectively, comma (,) and linefeed (LF). While the comma is a typical for a Windows csv file, the LF terminator is not typical. In fact, this formatting convention is typical for csv files in Unix and Linux operating systems. A prior tip demonstrates the need to use a special rowterminator code ('0x0a') in SQL Server when importing csv files terminating in LF.

The following SQL script uses a two-step process for importing the Cars93.csv file into a SQL Server table. In the first step, all fields, except for ID, are imported as variable length character fields with a varchar (50) specification. The ID field is a number identifier for rows in the file, and its values are imported with an int data type. In the second step, the number field values, except for ID, are converted to int or float depending on whether they contain, respectively, integer data or data with a decimal point. The script additionally demonstrates some other features for importing data science datasets into SQL Server that you may find useful. 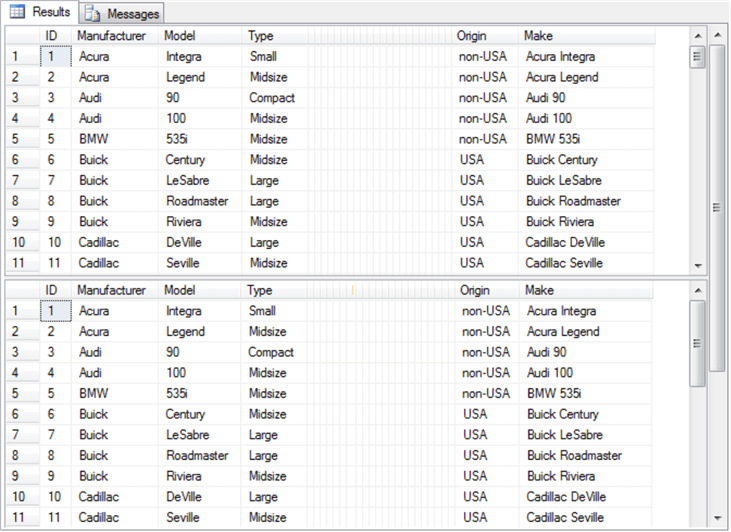 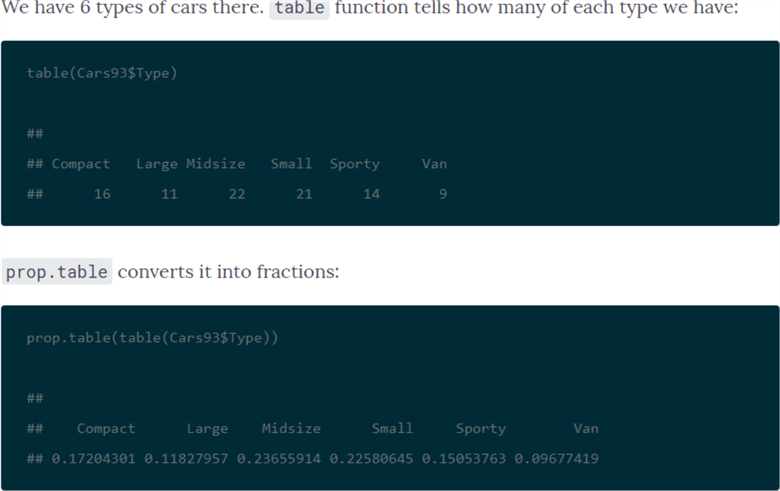 The following code segment displays SQL syntax for arriving at comparable results. The SQL code is less compact than the R code for at least a couple of reasons. SQL is not optimized for exploratory data analysis, and it is more natural with SQL to display results vertically rather than horizontally.

Here's the output from the preceding SQL script.

The DataCamp tutorial next directs its attention to counts and proportions for cars by Origin. Cars are classified as manufactured in the USA or in a non-USA country. The reason for exploring this second variable is that its categories will eventually be used in a contingency table as well as a Chi Square test. The code is very compact and follows the same convention as for the car counts and proportions presented above.

Here's the output from the preceding SQL script. Again, the SQL results match the R results, except for the number of places to which values are rounded. 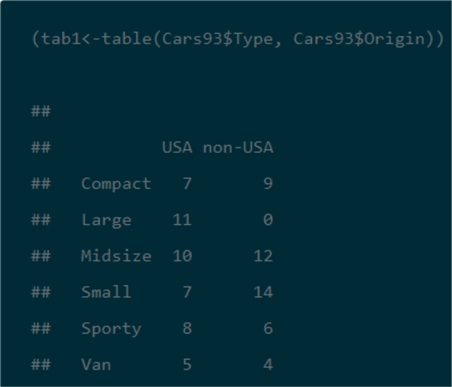 The next SQL script excerpt illustrates one approach to computing a contingency table for the Type and Origin in the Cars93 dataset.

The next screen shot shows an excerpt from the #temp_row_id_by_col_id_ID table and the contingency table in #temp_type_by_origin_car_count. 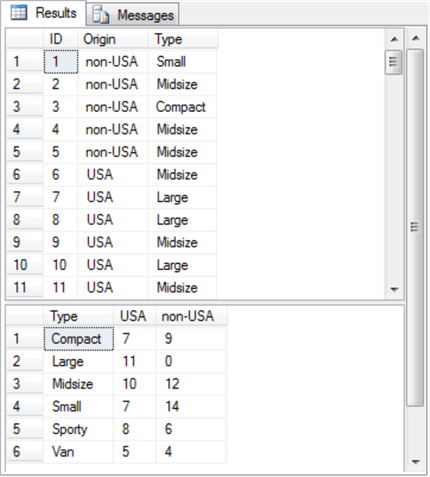 The following screen shot shows the code and results from the DataCamp website for computing a Chi Square value based on the contingency table created in the preceding section. An R script implements this task.

This tip depends on several files, which are available as a download with this tip.

After installing the files in your development environment and verifying that they work as described in this tip, you should be ready to start processing your own data. Use a csv file as your source data file. Change the column names from Type and Origin to whatever other names are appropriate for your data. This will allow you to compute a two-way contingency table for any data of your choice and to run a Chi Square test to assess the independence of row and column categories from the contingency table.