Please demonstrate how to use dynamic SQL and stored procedures to simplify dramatically the computation with SQL of one-way and two-way tabulations. The request is that the specification to calculate one-way or two-way tabulations with SQL should be as simple as with the R language.

A prior MSSQLTips.com tip (Contingency Table Analysis via Chi Square with SQL: Part 1) provided SQL-based templates for calculating counts of observed category values in one-way and two-way tabulations. Two-way tabulations are typically called contingency tables in data science projects. An additional template demonstrated how to assess the independence of row and column category values in a contingency table based on a Chi Square test. A noteworthy take-away from the prior tip is that it is possible to create SQL-based templates for calculating one-way and two-way tabulations. However, the SQL code is dramatically less compact at specifying this kind of calculation than the R scripting language, a popular data science programming tool. Also, the templates required some manual adjustment to accommodate new sets of category values. Nevertheless, much data for potential data science projects reside in SQL-based databases, and it could therefore be very beneficial to radically simplify the specification of one-way and two-way tabulations with SQL code.

The sizzle of this tip appears in three sections that are easy to scan. By quickly reviewing these sections, you can easily get the top-line idea conveyed by the tip. The section names are as follow.

If you decide you want to implement these kinds of solutions in your work or you just care to learn more about the approach, you can gain instruction in how to implement and customize the solution by reviewing the other sections that present the sample data and underlying SQL code for making the approach work.

Demonstrations of one-way and two-way tabulations with R

You can specify the data to be processed in R with code like this. Notice how just two lines of code designate a data source and enumerate the Type values for all 93 data rows in the Cars93 dataset. The code even returns a list of distinct Type values at the bottom of the display. 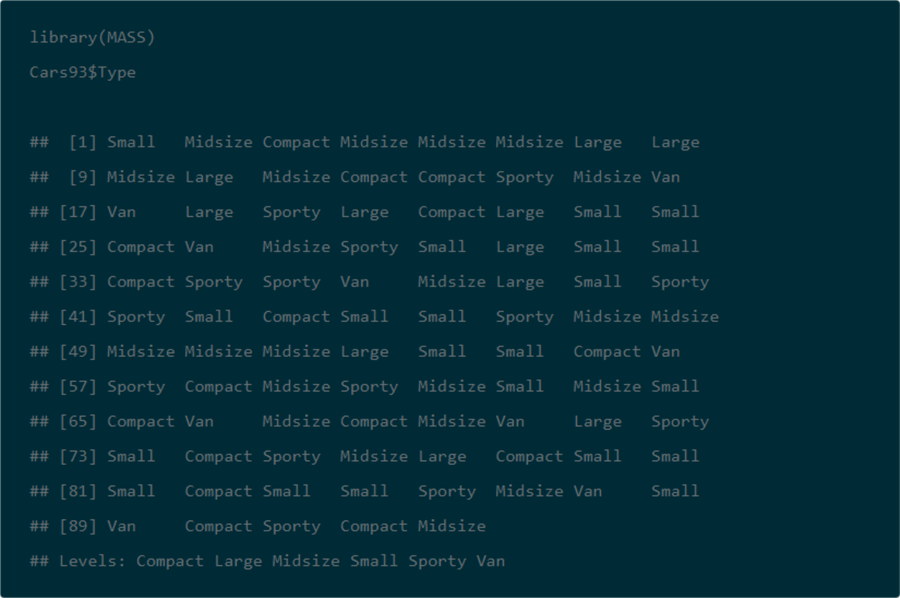 Here's an example of how just one line of R code generates a one-way horizontal tabulation of Type values from the Cars93 dataset.

Here's another line of R code to generate a one-way horizontal tabulation of Origin values from the Cars93 dataset. 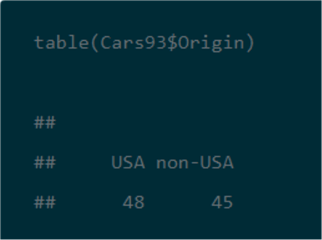 Finally, here's an example of one line of R code for generating a two-way tabulation of Type by Origin values from the Cars93 dataset. 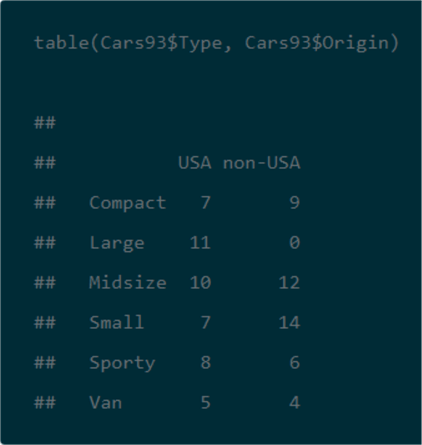 Data and analysis plan for the tip

This tip uses the classic data science dataset named Cars93; the dataset ships with the R language package. This tip downloads the dataset from this resource. This tip's analysis plan is based on both the part 1 tip "Contingency Table Analysis via Chi Square with SQL: Part 1") in this two-part series and a prior article on the DataCamp website. The Cars93 dataset is a very widely used dataset for statistical analysis demonstrations; see these references for examples (here, here, and here).

This tip limits its focus to one-way and two-way tabulations for selected categories in the Cars93 dataset, but the stored procedures are believed to be applicable without modification to any set of categories in any dataset. In general, a tabulation is a count of observed category values, such as number of cars by origin (USA or non-USA) or type of car (Compact, Large, Midsize, Small, Sporty, Van). Tabulations are only appropriate for variables that are categorized. Tabulations are not appropriate when processing a continuous variable such as car weight, unless weight is categorized into a set of categories, such as less than or equal to 2,500 pounds, greater than 2,500 and less than or equal to 3,500 pounds, and greater than 3,500 pounds).

The subset of Cars93 categories used in this tip to test code include: Origin, Type, Manufacturer, DriveTrain, and Man.Trans.Avail. Notice that not all these category names are consistent with SQL Server column naming conventions. In particular, the Man.Trans.Avail category name is consistent with a SQL Server three-part name, but the whole name really references a single column in the Cars93 dataset -- not the avail table in the trans schema of the Man database.

Transferring data from a csv file to a SQL Server table

As covered in the preceding section, the data for this tip can be downloaded from one of several sources where you can obtain the Cars93 dataset as a csv file. For your convenience, one of these sources is in the download file with this tip. The following screen shot displays the first ten of ninety-four rows from the csv file. The original downloaded Cars93.csv file is renamed Cars93_b_4_editing.csv within this tip.

Some minor editing was performed on the raw csv file to make it an easy and familiar one to import into a SQL Server table. The following screen shot shows the edited version of the downloaded file, which has the name Cars93.csv.

The script_to_create_load_contingency_table_source_data_wo_ManTransAvail_fix.sql file is for the first stored procedure; the SQL script file is available for download with this tip. This script file has four code segments. The segments are separated from one another by horizontal lines comprised of dashes (-). The file appears in the following script window.

The initial segment drops the load_contingency_table_source_data_wo_ManTransAvail_fix stored procedure if it already exists in the database context.

The second segment creates a SQL Server table based on the contents of the Cars93.csv file.

As mentioned, one of the five Cars93 fields used in this tip for unit testing is not designated correctly as a SQL Server column name. The default field name is Man.Trans.Avail. This field name needs to be updated in a way so that it does not reference a field named avail in the trans schema of the Man database. One way to accomplish this is to assign an alias to the field named ManTransAvail. The alternative name transforms the field name from one pointing at a particular schema in a particular database to one pointing at a field name in the same default database and schema as the other fields used for unit testing. There are other original Cars93 field names that need the same kind of fixing for processing within SQL Server, but these fixes are outside the scope of this tip because they are not used for unit testing in this tip.

The following script is an excerpt from the "Compute_horizontal_tab before_and_after_column_fix" SQL file. The script presents a demonstration of a SQL-based approach for creating one-way tabulations from a temporary table named ##temp_clean. The tabulations are for five category variables with named: Origin, Type, Manufacturer, DriveTrain, and Man.Trans.Avail. All five of these names point to columns in the Cars93.csv file.

The script has two main parts.

The next screen shot shows an excerpt of the output in the Results tab from running the preceding script. There are two main types of output from the script. 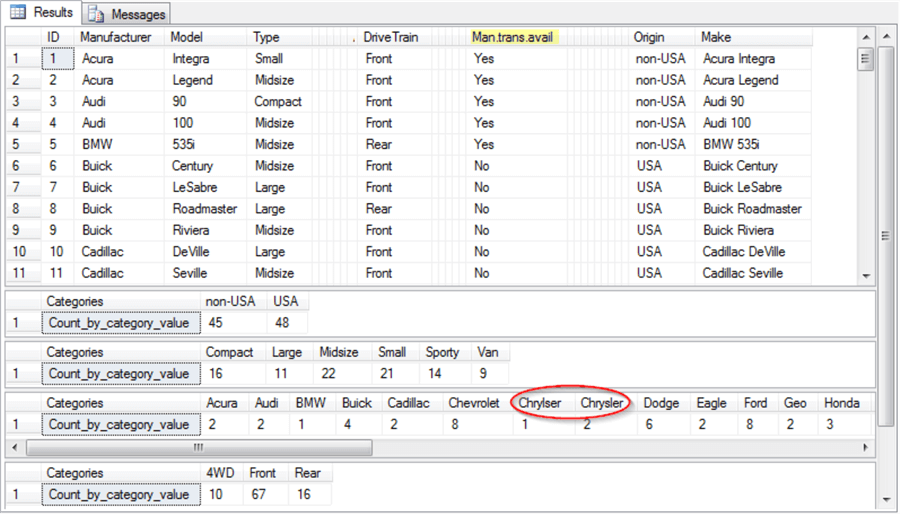 The next code listing displays the SQL code to return result sets for all five category variables after the assignment of an alias of ManTransAvail to the ##temp_clean column with an original name of Man.Trans.Avail.

The next screen shot shows the output from the preceding script. This script did not open in SSMS to the Messages tab because there was no critical error message. The Results tab appears below. 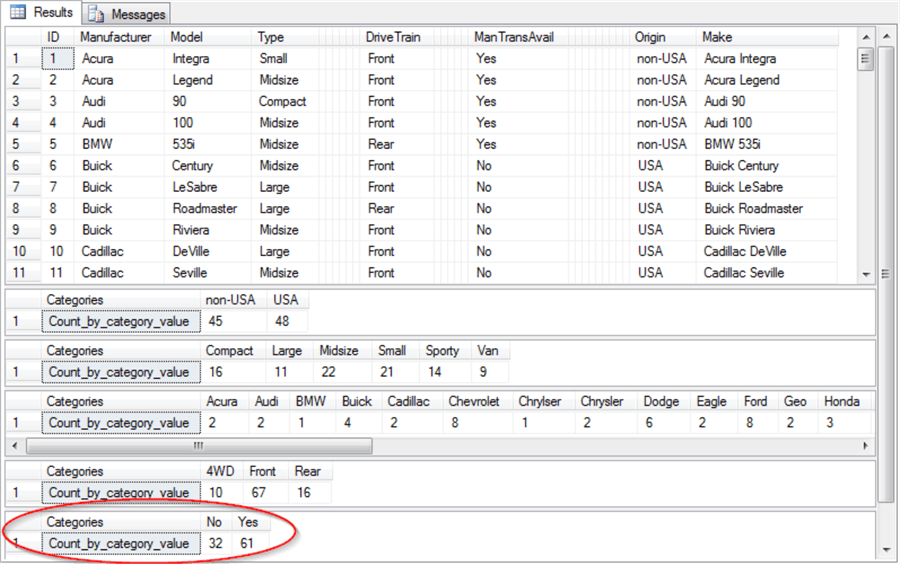 The script file for the Compute_horizontal_tab stored procedure has four major segments that are divided by horizontal comment lines in the following listing. 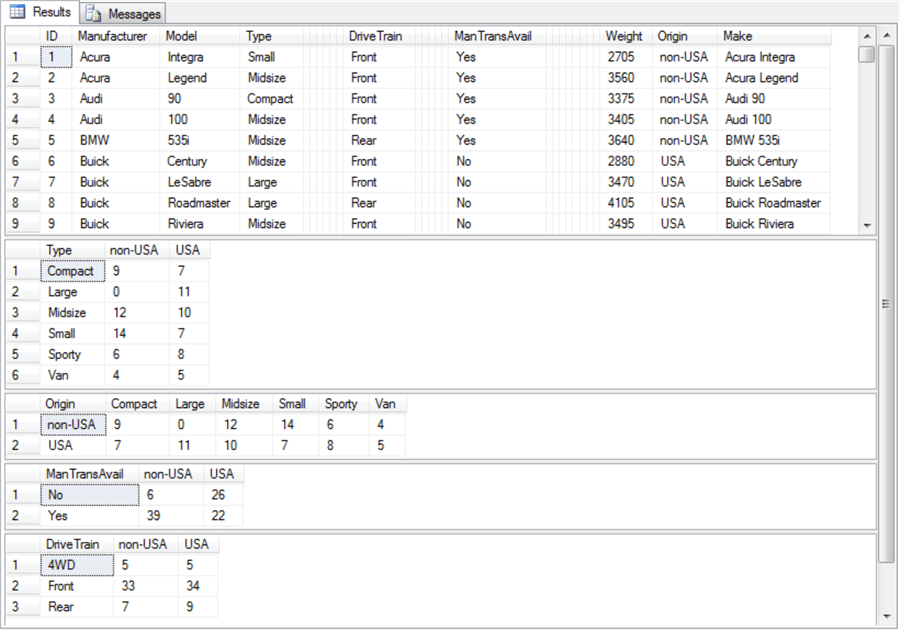 As with other stored procedures from this tip, a script file (script_to_create_Compute_contingency_table.sql) enables you to create a copy of the Compute_contingency_table stored procedure in a database of your choice. The file has four segments with functions that generally follow those for the Compute_horizontal_tab stored procedure. The listing below is copiously commented to make it easy for you to follow the function of lines of code. The commentary below further clarifies the objective(s) of each segment.

This tip depends on several files, which are available as a download with this tip:

After installing the files in your development environment and verifying that they work as described in this tip, you should be ready to start processing your own data. Use a csv file as your source data file or just directly populate a ##temp_clean table from some alternate source, such as tables in a SQL Server database. Be sure the ##temp_clean table has an identity column named ID and document the other column names in the custom ##temp_clean based on your own data. This will allow you to compute one-way tabulation tables and two-way contingency tables for any data of your choice.

If you desire, refer to the "Contingency Table Analysis via Chi Square with SQL: Part 1" for code that can be adapted to compute a Chi Square test for independence based on your custom contingency tables.