Decision trees are a data science technique with two primary use cases. First, you can classify objects based on criteria where higher-level nodes split into two lower level nodes. Binary splits of higher-level nodes result in increasing commonality among values associated with lower-level nodes. Part 1 of this tip series introduces and illustrates the theory and code for implementing decision tree classification models based on two classes (e.g., patient has the disease versus patient does not have the disease).

This third part of the tip series focuses on a second use case for decision tree models. The second use case accounts for the variance in the numeric values of a dependent variable via a set of two or more predictors with categorical values. This third tip in the series also illustrates a computational method (i.e., standard deviation reduction) that enables the implementation of the decision tree regression algorithm.

A main objective of this tip series is to grow among T-SQL developers an understanding of classic data science models. To facilitate this goal, models are built with T-SQL code.

The decision tree algorithm for regression seeks to optimally account for variation in a column of continuous values with a set of two or more other columns having categorical values. The dataset for the algorithm contains a dependent variable column (sometimes called a target column) and categorical predictor columns along with other columns that identify the entity on each row of a dataset.

A couple of widely referenced articles (here and here) present manual steps for implementing a decision tree regression model for the same data source, which consists of fourteen rows in a dataset. This tip adapts the model fitting process for implementation via T-SQL code. Additionally, the data source for this tip originates from a SQL Server data warehouse instead of a fourteen-row dataset.

Decision tree regression explains the dependent variable by successively picking predictor columns populated with categorical values that result in more homogeneity among a set of child nodes than their parent node.

The node splitting process demonstrated in this tip depends on standard deviation reduction from a parent node to its child nodes.

It is common for standard deviation reduction applications to compute four measures when searching for the best predictor variable for splitting a parent node. The four measures are:

The stdevp function values for the parent and child nodes are used to help compute the standard deviation reduction from the parent node to the child node. The count function also directly contributes to the standard deviation reduction between a pair of nodes. The avg function and coefficient of variation can add context for interpreting the output from the decision tree regression model.

Data for this tip

It is common for data science projects to begin with a data wrangling process. The data science project for this tip is representative of other projects, which can require multiple rounds of processing to transform original source data to a format suitable for input to a data science modeling technique.

The following script pulls two columns that will be used in the regression model as well as some additional columns for identifying entities in a temporary table named #source_data. Weather observations are made from weather stations from a potential date range that begins with a start date and runs through an end date.

The next script shows the final script for building a dataset for the decision tree regression application demonstrated in this tip. This script has an outer query drawing on a derived table from a subquery named foo; foo is an arbitrary name because T-SQL syntax for referencing derived tables require the subquery for the derived table to have a name, but the name does not matter in this application.

The following table shows images of the first twenty rows from each of the three states contributing weather observations to the source dataset for this project. There are 294 weather rows in total within the #for_sd_reduction_with_date_and_geog_bins temporary table.

First Twenty Weather Rows from each of Three States

Before starting the standard deviation reduction computations, the code declares local variables for each of the four measures for each predictor as well as the target column (snow_avg), which is the column being estimated by the regression model. Subsequent code assigns values to these local variables.

The decision tree regression algorithm next computes a set of six local variable values for all predictors. Here is the T-SQL code for achieving that goal for the snowy quarter indicator. The complete code for all three predictors is available in the download for this tip. Perhaps the best way to understand this code for the snowy quarter indicator and by extension the other two predictors is to review the text in "The decision tree algorithm for regression" and the output from the code that appears later in this section. Therefore, instead of offering detailed descriptions of the code below, this tip switches to a summary of results for all three predictors.

Here is the output for processing the snowy quarter indicator with the preceding code, which implements a portion of the code for prospective decision tree first-level nodes. The output consists of four separate results sets displayed in a single SSMS Results tab window.

If you examine the following screen shot carefully, you will note that the fourth NS row (ns_south_indicator) has identical column values to the fourth WE row (we_west_indicator). This is not an error. The underlying data for both bins are identical because both bins point to weather stations in Texas, which are always south and west of weather stations from the other two states. 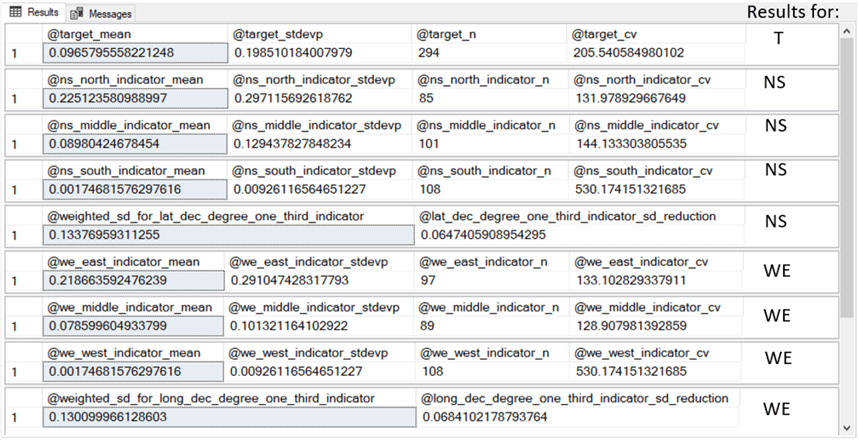 The preceding two screen shots show the standard deviation reduction for each of the three predictor columns for the first level of the decision tree below the root node. The long_dec_degree_one_third_indicator predictor has the greatest standard deviation reduction. Recall that there are three states contributing weather rows to this data science project: NY, IL, and TX. These states are in both a north-south orientation (assessed by latitude decimal degrees) and an east-west orientation (assessed by longitude decimal degrees) to one another. That is, weather stations from NY are generally north and east of those from IL, and IL weather stations are always north and east of those from TX. Furthermore, the average daily snow is greatest for NY, next largest for IL, and least for TX.

The following decision tree reflects the preceding results regressing each of the three predictors on the snow in inches grouped by quarter. As indicated in the preceding table, the long_dec_degree_one_third_indicator is the name of the predictor that accounts for the greatest variance across rows.

This section of the tip has four subsections that illustrate key elements of the process and code for adding a second level of nodes to the preceding decision tree. There are two remaining predictors, namely snowy_quarter_indicator and lat_dec_degree_one_third_indicator, for contributing nodes to the second level. You can add either of these candidate predictors to the first-level nodes depending on which predictor has the largest sd_reduction. This section sketches the process and T-SQL code for adding second-level nodes to the decision tree. The section also presents and discusses the decision tree diagram for regression through the second-level nodes.

There are two steps for setting up to add second-level nodes to the first-level nodes of the decision tree.

Here is the declare statement that specifies each of three sets of local variables used to compute the second-level nodes. The three sets are

Code and results for reporting on the snowy_quarter_indicator

The following screen shot shows the four results sets from the preceding script.

The following screen shot shows comparable results sets for making predictions with the @lat_dec_degree_one_third_indicator predictor category values (i.e., ns_north_indicator, ns_middle_indicator, and ns_south_indicator). Notice there is no row for the set of all rows from the #we_east_indicator_target table. The results sets below draw on the same table as in the preceding screen shot.

The most important point to observe for the following results sets is that the standard deviation reduction value in the last row has a value of NULL. This means the sd reduction value is missing. Therefore, the @lat_dec_degree_one_third_indicator predictor is disqualified for making predictions for rows in the #we_east_indicator_target table.

Diagram through the second level for the decision tree regression model

This tip is for anyone with a basic understanding of T-SQL and an interest in learning about the decision tree algorithm for regressing multiple predictor columns on a target column. After walking through the steps in this tip, you can see the decision tree regression algorithm is not especially complicated. The hardest part of the algorithm presented in this tip may be the devising of a naming convention for keeping track of parent and child tables as well as scalar values required by the algorithm.

There are three files in the download for this tip.

The decision tree regression algorithm is a very commonly used data science algorithm for predicting the values in a target column of a table from two or more predictor columns in a table. Here are two additional references for you to review for learning more about the algorithm.

After you apply the technique to the sample data for this tip, you will be ready to apply the decision tree regression algorithm to data from your organization. If you have ever been stumped about how to predict a target column of values from two or more predictor columns, you will know how to do it after reviewing the content in this tip. Furthermore, if you are working with a team of data scientists, the information that you gain from this tip will enable you to add more value to data science projects and expose you to general kinds of issues that you are likely to encounter with data science models.