I want to grow my understanding of decision tree models for classifying objects.  Please present T-SQL code and a framework that can classify objects from a dataset and assign the objects to nodes in a decision tree.  Please also contrast the use of T-SQL code for binomial as well as multinomial classification.

Decision trees are a data science technique for identifying criteria based on a set of attributes that classify objects as belonging to one of two or more groups.  Objects to classify can include prospective heart-disease patients.  The decision tree can assess if a patient has heart disease or not.  Another use case for a decision tree model is to assess if a prospective borrower qualifies for an especially low-interest-rate loan, a higher-interest-rate loan, or no loan at all.

This tip and the series to which it belongs illustrates the basics of how to implement classic data science models with T-SQL.  The purpose of the tip series is to introduce T-SQL developers to selected data science models.  To facilitate this goal, models are built with T-SQL code.

A decision tree model starts with all dataset objects belonging to a root node.

The data for this tip

This tip builds decision tree models for analytically classifying weather observations by state from a SQL Server weather warehouse.  The source for the observations is the National Oceanic and Atmospheric Administration (NOAA) website.  The weather facts are minimum daily temperature in Fahrenheit degrees, inches of daily rain, and inches of daily snow. The weather observations come from a previous tip that creates and populates a SQL Server weather warehouse.

It is common for data science projects to begin with a data wrangling process. The project in this tip starts the wrangling by pulling an excerpt from a weather data warehouse.  To keep the tip’s focus on classification models, T-SQL code for data wrangling is summarized at an overview level in this tip.  The detailed code along with intermediate output tables are available in this tip’s download.  The code starts by extracting data for a dataset with class identifiers and weather facts as attributes.  The warehouse includes daily weather over a four-year period (2016 – 2019) for weather stations from five states (California, Florida, Illinois, New York, and Texas).  Key tables from the database include a couple of fact tables with references to two dim tables.

The table below shows images of the first and last five weather data rows from each state.  For the images below, the grouped average daily weather observation numerical values were further transformed based on whether weather facts were at or below the median value for an attribute or above the median value for an attribute.  These transformed data are from a table named for_gini_comps_with_median_based_bins.  A casual review of the rows from the three states in the table facilitate a confirmation of the row counts by state.  In addition, the review supports potential weather pattern differences between the states.

This section offers a walk-through of the steps for deriving the first-level nodes below a root node in a decision tree from the data source described in the preceding section.  The decision tree is based on a one-versus-rest classification model formulation.

The screen shot below shows eight steps for computing the weighted gini score (@gini_for_snow_at_or_below_median) for snow_median_coded attribute values.  Each step is a separate results set from code like that presented and discussed in the next sub-section.  The eight results sets appear at the end of this sub-section.

The following T-SQL script can generate the results sets described in the preceding sub-section for snow median coded values.  There are three main segments to the script.

The decision tree for the first-level split

The following diagram shows the decision tree for the NY rows versus the IL & TX rows from the root node and after the first split. 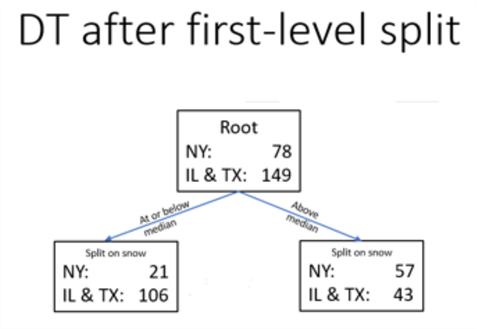 Look at second-level split for NY vs. IL and TX decision tree

The following screen shot shows second-level weighted gini scores in column D along with other relevant reference data in the remaining columns.  Remember, the lower the weighted gini score, the purer the rows associated with a node.

The following script shows the T-SQL code for computing the weighted gini score for splitting based on the prcp attribute in the second level below the at or below snow median node from the first-level split.  There are two key points that you may find especially useful to study.

The decision tree for the second-level split 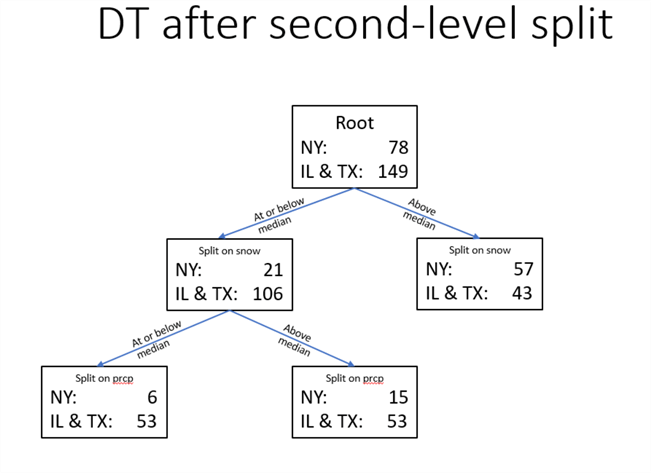 For both paths, the split at the third level is for the only remaining attribute -- tmin.

The following screen shot displays the decision tree for NY versus IL & TX through the third level.  By reviewing the weather row counts within the leaf nodes, you can uniquely and exhaustively characterize all sets of weather rows in the decision tree. 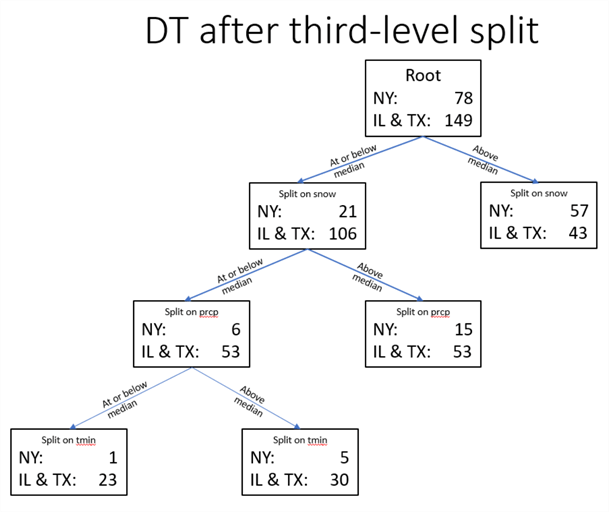 If your purpose is to describe the mix by state within nodes across all decision tree nodes and account for all rows in a specific dataset, then the above description meets your requirements.  However, very often the objective of using a classification model is to represent the likely classification of objects in any of multiple sample datasets from an overall population or rows.  In this second kind of use case, then you can omit one or more levels of nodes towards the bottom on the decision tree.  In this tip, if we omit the bottom two levels, then we have the decision model displayed at the end of the “In-depth look at first-level split for NY vs. IL & TX decision tree” section.  This kind of model is likely to better classify more samples of weather rows for NY vs. IL & TX.

The following table shows the weighted gini score for a first-level split of TX weather rows versus weather rows from NY & IL.  Because snow has the lowest gini score, it is the top-level attribute for classifying weather rows by state.  That is, the criterion for a snow attribute value that is at or below the median or above the median is the most effective criterion for indicating whether a weather row is from TX or NY & IL.  While this same attribute is also most effective at splitting NY from IL & TX, the weighted gini score for the model classification presented in this section is marginally better than the one in the “In-depth look at first-level split for NY vs. IL & TX decision tree” section.

You can compare the code for populating the for_gini_comps_snow_median and confirm that the code is generally the same as the T-SQL in the “T-SQL code for eight steps” sub-section.  On the other hand, the where clause criterion for STATEPROV column values has a different setting between the two classification models.

The code below compares TX weather rows to weather rows from NY & IL for the TX vs. NY & IL one-versus-rest classification model.

Here are the results sets from the preceding script.  This script is for the snow attribute at the first-level split of the root node.

The decision tree for the first-level split

The easy conclusion from the diagram below is that it snows a lot less in TX than in NY & IL. 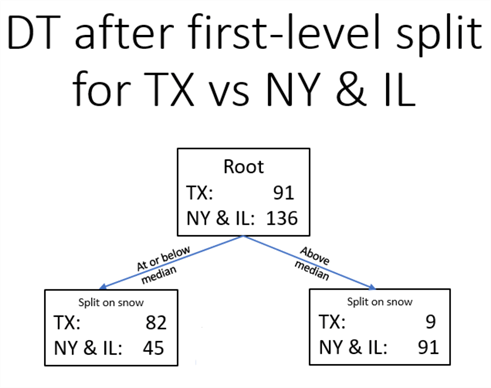 This tip targets anyone with a basic understanding of T-SQL and an interest in knowing more about the decision tree algorithm for classifying objects as belonging to one of two or more classes.  There are six files in the download for this tip.

The decision tree algorithm is a very commonly used data science algorithm for splitting rows from a dataset into one of two or more groups. Here are two additional references for you to get started learning more about the algorithm.

The one-versus-rest approach is a more advanced decision tree modeling approach for multinomial classification.  Here are a couple of links for you to start exploring this approach beyond this tip.