I want to get a first-hand feel for the decision tree algorithm logic for classifying objects because I recently joined a data science team.  Please demonstrate the use of the algorithm for data from a SQL Server data warehouse.  Also, present T-SQL code and a framework that can assign objects in the dataset to decision tree nodes.

In its most basic implementation, the decision tree algorithm is a data science technique that seeks to split rows successively from within a dataset so that each split divides the rows into two groups of similar objects. The dataset must also have a column for identifying objects as belonging to one of two groups as well as other columns for object properties.

The decision tree algorithm is attractive because it is relatively easy to code, and its output is easy to understand – especially when viewed in a decision tree diagram.  Two forthcoming tips will demonstrate how to implement with T-SQL other decision tree algorithm application features, such as predicting a continuous value based on subsets of column values and grouping rows into sets of more than two groups.

An introduction to the decision tree algorithm for classifying objects

The following table shows some arbitrarily composed data that reflects survivor trends by gender and age for the Titanic’s maiden voyage.  This is the kind of dataset that the decision tree algorithm is designed to analyze.  Each row has an identifier: 1 for a survivor and 0 for not a survivor.  In addition, each row has a pair of attribute values: F and M for gender and a number to reflect a passenger’s age.

A common practice is to place women and children in the lifeboats before allowing men to enter lifeboats.  The data reflect this practice.

To implement a decision tree algorithm, you need to split the root node with all data rows into two groups based on a decision criterion.  Then, if one group is pure – made up of only survivors in this sample dataset -- the new derivative node would no longer need to be split.  If the other derivative node were not pure, then it is a candidate for a second round of splitting based on a second criterion.  You can represent these criteria by a cutoff value for an attribute.

The data for this tip

This tip demonstrates a decision tree algorithm application for grouping states based on weather observations downloaded from the National Oceanic and Atmospheric Administration (NOAA) website.  The weather facts are minimum daily temperature in Fahrenheit degrees, inches of daily rain, and inches of daily snow.  The weather data are from selected weather stations for the five most populous states based on the 2010 decennial census: California, Florida, Illinois, New York, and Texas.  The weather observations come from a previous tip that creates and populates a SQL Server weather data warehouse based on downloaded observations.

There are three steps to preparing the dataset for the decision tree application demonstrated in this tip.

The T-SQL code for performing each of three preceding steps is provided in the download for this tip.  The following script shows the code for displaying median-coded bins for each weather station.  The data resides in the for_gini_comps_with_meadian_based_bins table.  As the name implies, this table contains the source data for computing weighted gini scores.  The weighted gini scores indicate which attribute is best for splitting the rows associated with a node in the decision tree.

The following screen shot shows the results set from the preceding script. 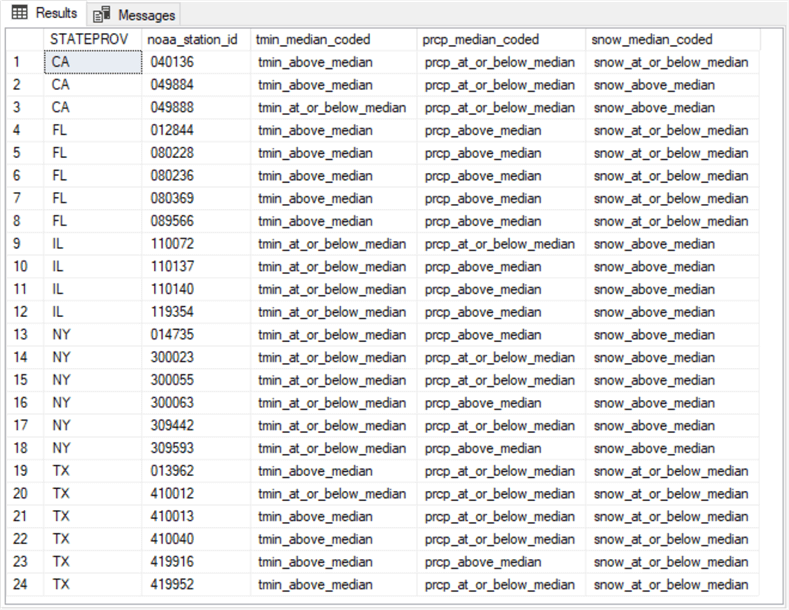 Computing gini scores based on the decision tree algorithm

The states from the dataset are split into two parts based on weighted computing gini scores.  One part is for NY.  The other part is for the remaining states of CA, FL, IL, and TX.  There are 6 weather stations in NY, and there is a total of 18 weather stations in the remaining 4 states.  The purpose for computing the weighted gini scores is to find which of the three median-coded attributes is the best for distinguishing between NY and the other four states. 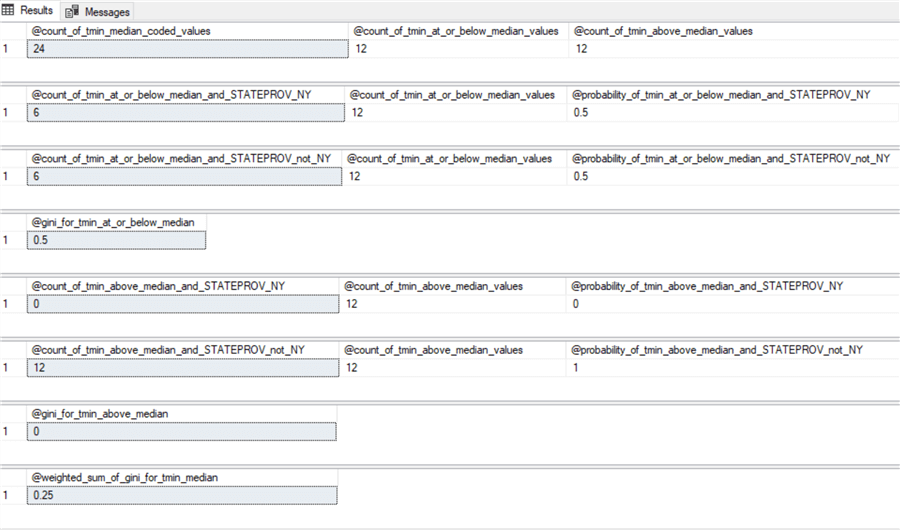 To keep the focus on tmin_median_coded values and their relationships with states, the code for the preceding screen shot starts by creating and populating a table with just three columns -- STATEPROVE, noaa_station_id, and tmin_median_coded.  The table’s name is for_gini_comps_tmin_median.  Here is the code for achieving this goal. 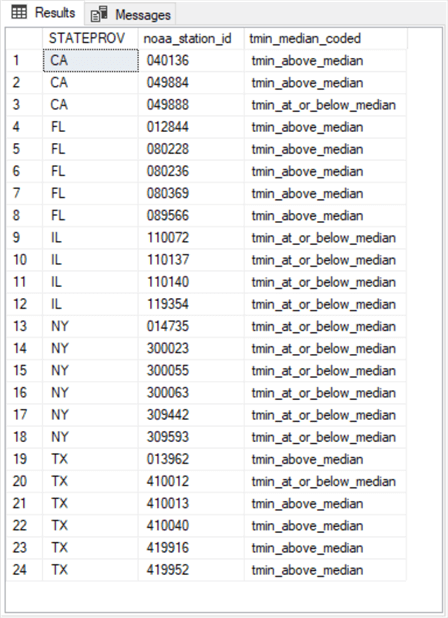 The code for computing weighted gini scores for prcp and snow facts are in the download file.  Except for name changes based on the type of weather fact for which a weighted gini score is being computed, the declare and select statements as well as the order of the results sets are the same.  However, there is one somewhat significant difference.  The above script arranges declare statements with matching select statements in order after one another by results set.  The generally corresponding code in the download file starts out by declaring all the local variables, and then follows the declare statements with the select statements for displaying the local variables and their inputs.

If you examine some of the values computed on the way to deriving weighted gini scores, you can gain further insights into why tmin and snow attributes are best at splitting rows from NY state from rows for the remaining states.

This tip targets anyone with a basic understanding of T-SQL and an interest in knowing more about the decision tree algorithm for classifying objects as belonging to one of two classes.  There are two files in the download or this tip.

The decision tree algorithm is a very commonly used data science algorithm for splitting rows from a dataset into one of two groups. Here are two additional references for you to get started learning more about the algorithm.