Weather data can be useful for certain applications and creating a historical data warehouse can be helpful to align this data with certain events that occured.  The data is readily availalbe for download, so how can you build a weather data warehouse in SQL Server?

Weather can impact many businesses. For example, snowy roads that freeze can result in increased insurance claims because of vehicle accidents. In some states, sustained cold weather can lead to above average levels of heating oil consumption. In other states, sustained hot weather can result in above average levels of demand for electricity to cool homes and workplaces. Understanding and preparing for weather impacts depends on learning how different aspects of a business vary when the weather changes. Businesses can prepare for and assess the impacts of weather changes on their operations by building a weather data warehouse.

The National Weather Service (NWS) Cooperative Observer Program (COOP) is sometimes referred to as the nation's weather and climate observing network of, by and for the people. Weather observations are collected at thousands of weather stations across the United States and its territories. This tip leverages several prior tips about gathering and processing weather data from COOP inside of SQL Server for the purpose of populating a data warehouse.

Types and sources of weather data

Weather occurs at a geographic locale. Weather also changes over time. If you have a collection of locales for making weather observations, then you can report the weather from different locales by jurisdiction as well as over time, such as on a daily basis.

The COOP weather stations are listed and documented in the National Oceanic and Atmospheric Administration (NOAA) website. The most recent COOP station metadata is maintained in a pair of txt files that can be downloaded from the NOAA Historical Observing Metadata Repository.

The following screen shot displays the first five rows from the ccsl_still_in_use table in the noaa_data database.

Descriptions of the different kinds of weather observations available from COOP are available in this source. A weather observation is what an observer reports for a weather attribute, such as the maximum temperature during a date. You can download a file with weather observations from one or more weather stations starting with the NOAA Climate Data Online Search form. A prior tip, Gathering Information for a Weather Data Warehouse in SQL Server, demonstrates the process for creating download files for up to eight stations from the top five most populous states according to the 2010 decennial US census. The prior tip illustrated in a step-by-step way how to submit data specifications for the download files from the NOAA website. The tip also shows one approach for how to copy the contents of the download files into SQL Server tables.

The following screen shot shows an excerpt from object explorer with five download files used by this tip. 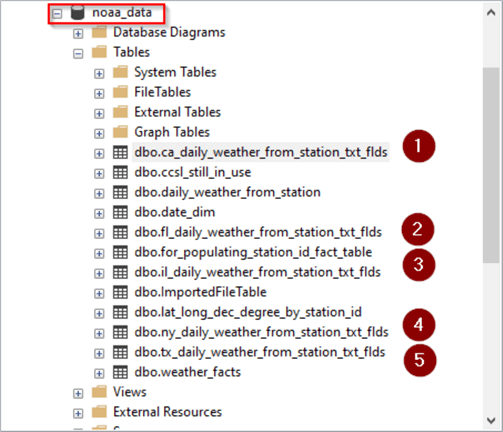 The following script enumerates the column names with associated information for each of the five tables in the preceding screen shot.

The next screen shot shows an excerpt from the results set from the preceding script pasted into an Excel worksheet. 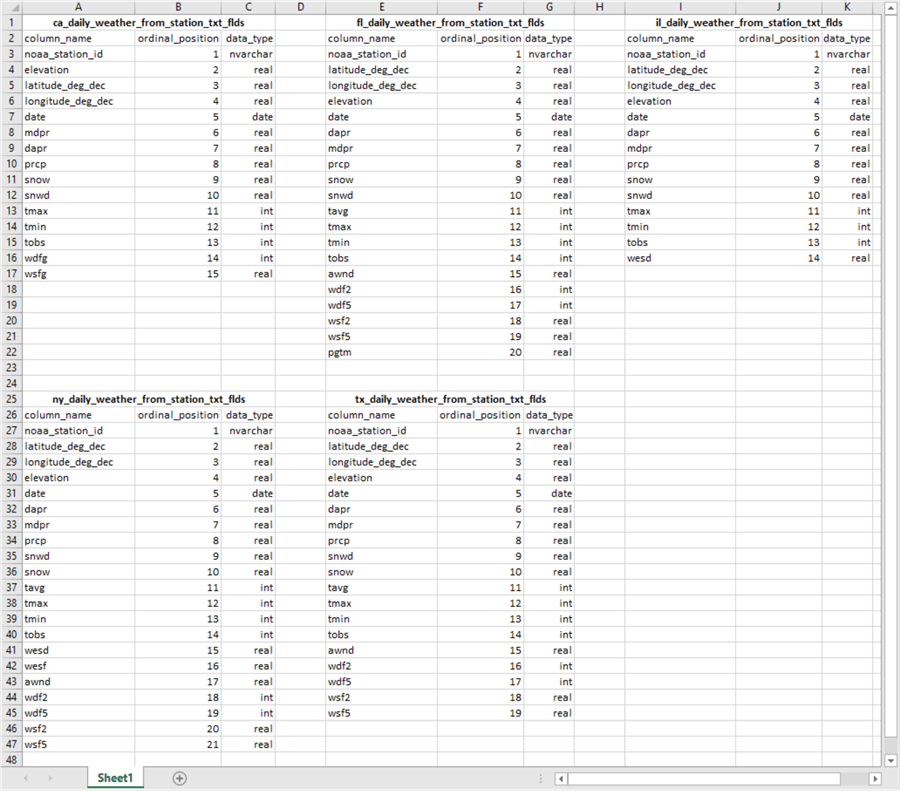 A data warehouse can store data in dim and fact tables. The fact tables store facts about an entity’s attributes. In this tip, one entity is the weather. Weather attributes designate types of weather observations, such as minimum daily temperature (tmin). A weather observation can be made at a weather station on a date. Observations for a weather attribute can occur across multiple dates. Therefore, a fact weather table (FactWeather) can point at two dimensional tables – one for stations (DimStation) and another for dates (DimDate).

The FactStation table and the DimStation table both point at stations. Within the NOAA data sources, station id values are recorded separately from both the station metadata table (ccsl_still_in_use) and the weather records data source. Sometimes, the same weather station as indicated by its latitude and longitude coordinates, can have different station identifier values, such as station id values in the station metadata table and the weather records data source. As indicated in the preceding section, you can determine if a station with one or more different metadata values match by comparing their latitude and longitude values after transforming the coordinate values to a common format.

The following diagram portrays the relationships between the four tables in this tip’s weather data warehouse. 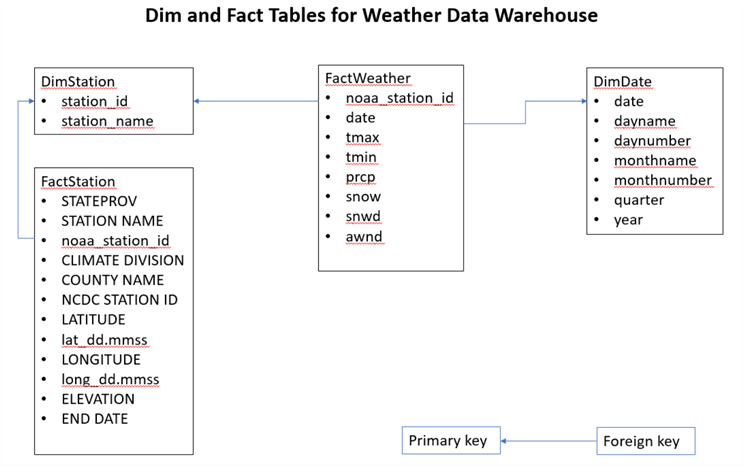 Code for creating and populating data warehouse tables and indexes

Because of the way that the NOAA weather data are organized and reported, it is not straightforward to compile the DimStation and FactStation tables for the preceding data warehouse model. Here’s an itemization of station data processing challenges.

The warehouse FactStation and DimStation tables start with an extract from the station metadata table (ccsl_still_in_use). Within the context of this tip, the ccsl_still_in_use table resides in the dbo schema of the noaa_data database. The extract is saved in a temporary table named #metadata_weather_station_IDs. Despite the name, the extracted table contains all columns of station metadata – not just the station identifier values (noaa_station_id).

A prior tip, Gathering Information for a Weather Data Warehouse in SQL Server, illustrates a process for requesting weather records from NOAA for the eight stations from each state. The prior tip also demonstrates how to transfer the contents of the NOAA files based on the requests to SQL Server tables. The SQL Server tables are the five tables described at the end of the "Types and sources of weather data" section.

The next script creates a results set based on the same set of columns from the five state tables.

The following three queries shows a preliminary analysis. The comment lines contain important information to help you follow the analysis.

The download at the end of this tip includes T-SQL code which confirms these interesting facts. That code creates and populates a new temporary table (#for_join_of_noaa_station_id_to_COOP_STATION_ID) with all the FactStation table field values for the three stations with recoded identifiers between the station metadata table and the weather records data source.

The following script creates, populates, and displays values from the DimDate table for the weather data warehouse.

Creating the primary and foreign keys for the data warehouse

Here’s a T-SQL script for building primary and foreign keys described in the immediately preceding bullets.

The data for this tip is built on weather records for each of five states and a station metadata table created in the prior tip Gathering Information for a Weather Data Warehouse in SQL Server. You can get the data for these tables from the download file available with that tip.