Building a data warehouse for data analysis can be extremely helpful to look back at the past and forecast the future with the collected data.  One set of data that we can store in a data warehouse is weather related data.  In this tip we look at how to collect data from National Oceanic and Atmospheric Administration (NOAA) and how we can load and query this data in SQL Server.

In this article, we will demonstrate some issues and workarounds that I encountered while gathering information for a weather data warehouse in SQL Server. The source of the data is from the National Weather Service (NWS) Cooperative Observer Program and I will highlight the impact of state jurisdictions as well as latitude and longitude coordinates verifying with the collected data.

The Cooperative Observer Program (COOP) is comprised of volunteer weather observers who use standardized practices to observe and record daily surface weather, such as temperature, rain fall, snow fall, and wind. The COOP is administered by the National Weather Service, which is an organization within the National Oceanic and Atmospheric Administration (NOAA) of the Department of Commerce. COOP weather observers are from the United States as well as its territories and provinces.

There are thousands of weather stations in the COOP program, and weather observations from these stations can be complemented by other weather collection programs under the auspices of the NOAA. Two prior tips, Analyze Historical Weather Data with SQL Server and Tracking Weather Stations Geographically with SQL Server and Excel, illustrate the basics for how to gather data about COOP weather observations from COOP weather stations for populating SQL Server tables.

Weather data can serve many business applications, such as evaluating the impact of weather on insurance claims, heating oil consumption, electricity load during summer months in hot weather areas, agricultural output, and clothing items purchased from retail outlets. COOP weather observations are a prime source of data for these applications because, among other considerations, the data are available without charge.

The base component is a list of COOP weather stations. This data source maintains data about stations, such as station name, station latitude and longitude coordinates, state and county jurisdiction names for stations, as well as the end date for daily observations from a station. The NOAA describes this list as a source for station metadata. Each weather station also has a unique station id value. However, the rows for whether stations on the list can change over time.

The list of COOP weather station metadata within this tip is available from a table named ccsl_still_in_use in the dbo schema of a database named noaa_data. You can learn more about the design of this table from article Analyze Historical Weather Data with SQL Server.

Each COOP station can generate multiple time series. When dealing with daily observations, the period for each time series will be one day. There will typically be more than one time series for a station. For example, regarding daily temperature, there are often at least two time series (daily minimum temperature and daily maximum temperature). Other time series values associated with weather stations include rain fall, snow fall, and accumulated snow depth.

This tip demonstrates three steps for collecting COOP weather time series values for storage in SQL Server. A subsequent tip will illustrate how to create, populate, and query a weather data warehouse in SQL Server based on the stored values from this tip. The steps applied in this tip include these tasks – two elaborated in this section, and a third step demonstrated in the next section.

The following script returns the count of COOP weather stations for these five states.

This screen shot shows the results set from the preceding script. 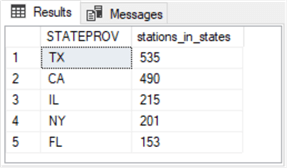 The next script shows the T-SQL code for selecting the first four and last four weather stations from each of the five most populous stations. The station list at the NOAA web site are in ascending order by COOP STATION ID value.

The following screen shot displays the results set from the preceding script. As you can see, it is just an extract from the full list of stations still in use. There are forty stations in the extract (eight stations for each of five states). The data are arranged in alphabetical order by STATEPROV value and then by COOP STATION ID value within a state. The other columns besides STATEPROV and COOP STATION ID simplify getting some context for the weather stations, such as the state in which a station resides and the latitude and longitude coordinates for stations. 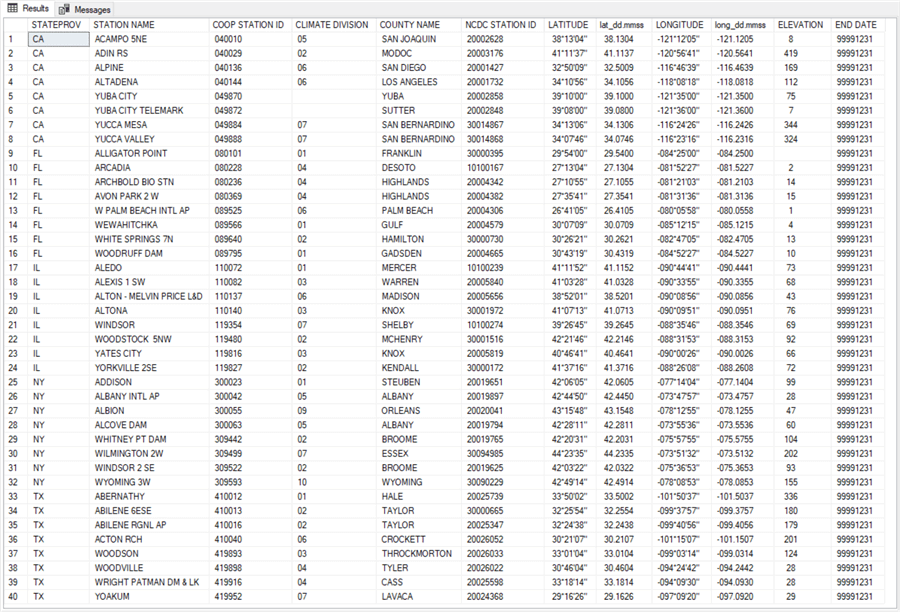 After a set of stations for which to collect data is specified, you can submit the COOP STATION ID values to a series of search forms at the NOAA web site to collect historical weather observations for those stations. Go to the initial weather search form at the NOAA web site to start specifying the a set of historical weather that you seek. After opening the page, you can populate with data for the California weather stations in this tip.

The following screen shot shows the form for the eight California weather stations. 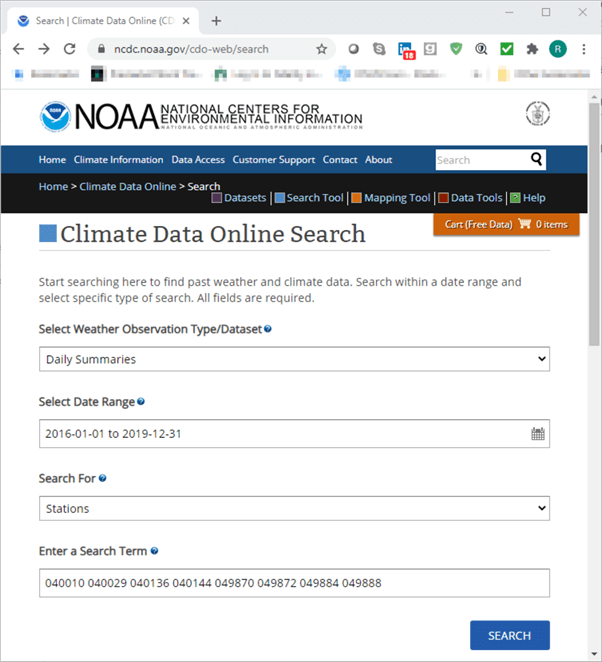 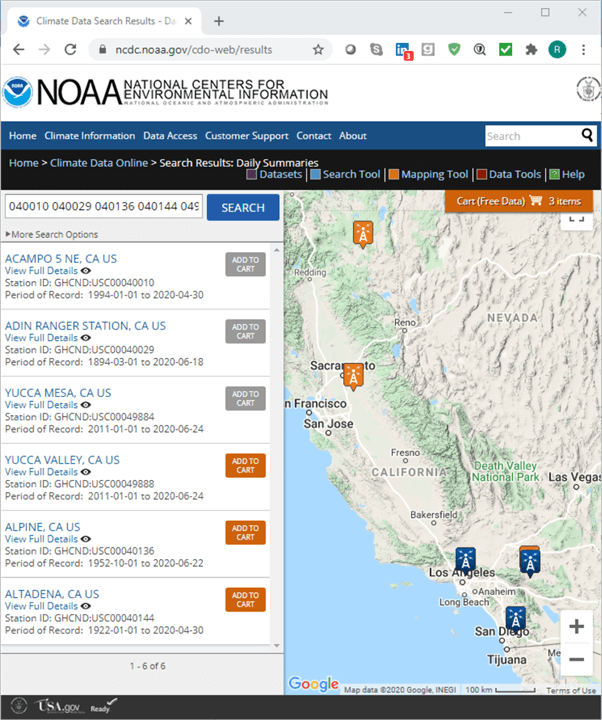 Click the Cart (Free Data) button to advance to the next form; this button appears towards the top right section of the map showing the location of weather stations. An excerpt from the Cart: Daily Summaries form appears in the following screen shot. For the purposes of this tip, you need to make sure the Custom GHCN-Daily Text button is selected. This selection directs the form application to display the weather data in a fixed-width text format on the NOAA web site. 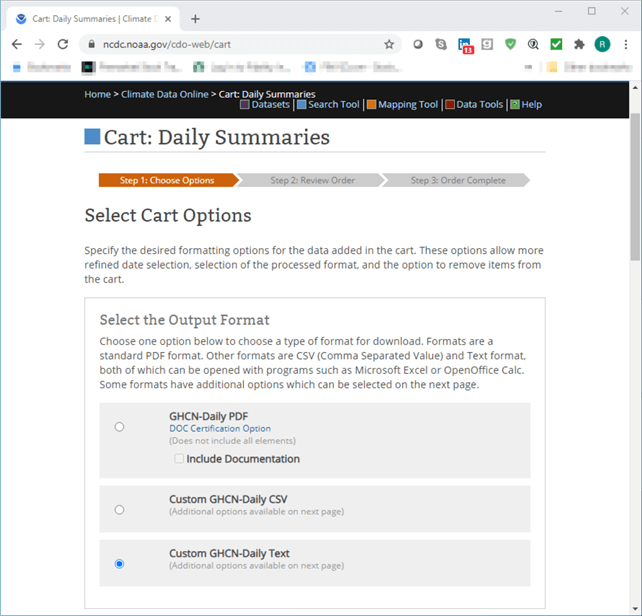 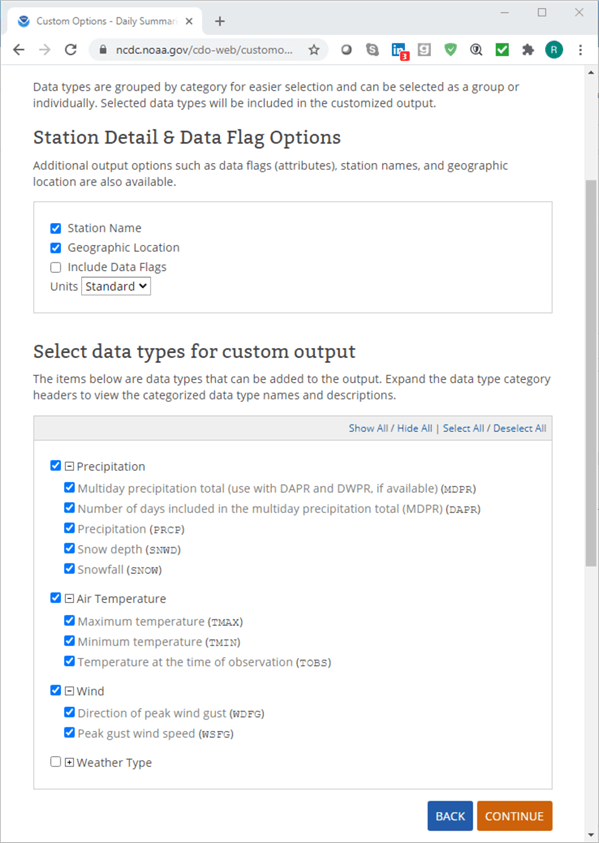 Clicking Continue on the preceding form page opens a web page from which you can review the weather data selections and submit the request to NOAA for processing. 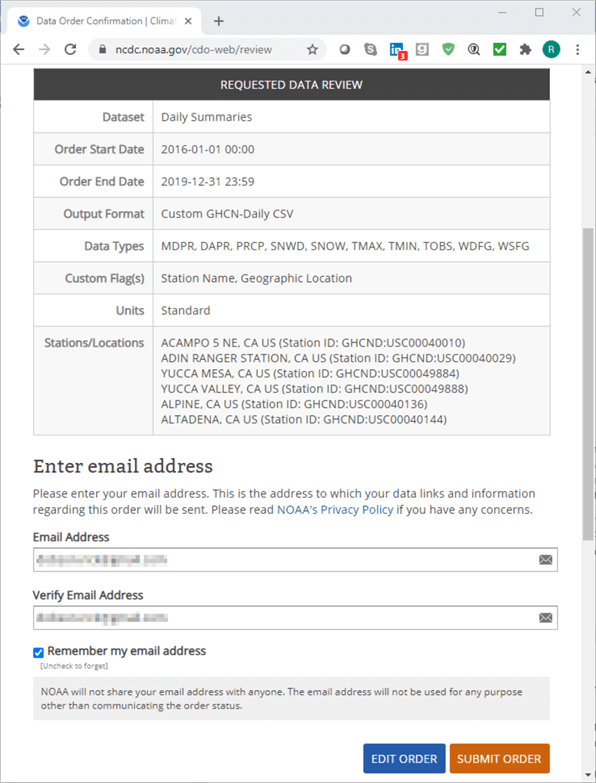 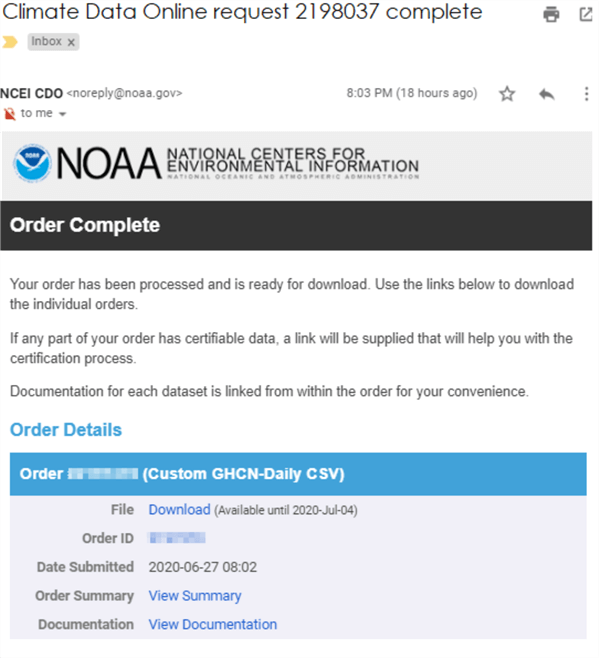 To complete this tip, you need to re-run the forms for the weather stations from each state that you want to include in the dataset for populating a data warehouse or some other application. This means you need to run through the forms for each of the remaining four most populous states, including Florida, Illinois, New York, and Texas. A fresh browser page will be populated at the end of each pass through the forms with a link for downloading the requested weather data.

After selecting the default browser's fixed-width text file view generated in response to a NOAA weather data request, you can manually execute Windows copy and paste commands to transfer the image to a NotePad++ session (or another text editor of your choice). From the text editor on your computer, you can save the copied text file to a folder on your computer. By successively applying Windows copy and paste commands for the text file images for each state, you can transfer the text file of weather data for each state to its own text file on your computer. The following screen shot from a NotePad++ session shows an image of the first ten rows of the text file with data for California. Notice that the filename is 2198037.txt; its named after the request number 2198037 for easy record keeping.

Through successive applications of Windows copy and paste commands with a follow-up save command, you can transfer the text file image for each state from your default browser to corresponding text file on your computer. The browser image is of the text file stored on the NOAA web site; the text file from the text editor is for the same weather data on your computer. The following screen shot from a NotePad++ session shows an image of the first ten rows of weather from California. Notice that the filename is 2198037.txt.

The following script illustrates an approach for transferring the 2198037.txt file to a SQL Server table named ca_daily_weather_from_station_txt_flds. Recall that the 2198037.txt file contains the data from California weather stations. The text file name is based on the number for a weather request. Each new request for a different state or for a different range of dates will have a distinct request number that is valid for the span of a couple of weeks (after that period, the request number values can be re-used by NOAA for other weather requests).

The next screen shot shows the first eight rows of data in the ca_daily_weather_from_station_txt_flds table.

You can repeat the broad outline of the above application for weather stations from California to the weather stations for the other four states in this tip. The download for this tip includes scripts that illustrate the customization of the broad outline for each of the remaining states. Additionally, the source data text files are also in the download for this tip. For at least one state, I also discovered some uncommon coding for missing values (that is, missing values were denoted by a value other than -9999). As you attempt to retrieve and use NOAA weather data, you should be looking for minor data issues as is common for most large production data sources.