The National Weather Service (NWS) Cooperative Observer Program (COOP) is sometimes referred to as the nation's weather and climate observing network of, by and for the people. The COOP is comprised of volunteer weather observers who use standardized practices to collect daily surface weather, such as temperature, rainfall, snowfall, and wind. The historical observations by COOP volunteers comprise a quality data source for daily historical weather trends.

The formal origins of the COOP date back to the Organic act of Congress in 1890 that established the NWS. A core set of weather stations were in operation prior to the act. Notable historical figures serving as weather observers include Thomas Jefferson, Benjamin Franklin, and George Washington.

Weather stations are added to and dropped from the COOP network from time to time. There are currently around nine thousand COOP weather stations dispersed across the United States and its territories. Daily weather observations are transferred from the COOP station operators to the NWS. Metadata for the weather stations as well as weather observations are available from web sites maintained by the National Oceanic and Atmospheric Administration (NOAA) of the US Department of Commerce. There are also other government web pages specifically on the history and general support roles for American agriculture and business of the COOP network (such as here and here).

The base component is a list of COOP weather stations. This list maintains station metadata, such as station name, the latitude and longitude of each COOP station, as well as the end date for daily observations from each station. You can think of this list as a source for metadata about stations.

The most recent COOP station metadata is maintained in a pair of txt files that can be downloaded from the NOAA Historical Observing Metadata Repository. An excerpt from the NOAA web page with COOP station metadata appears below. The NOAA maintains three lists of weather observing stations. The third section on the page excerpt below is for COOP station metadata. Within this section. there are two red box markups that each highlights a hyperlink. One box, ccsl.txt, is for the metadata contents. The contents reside in a fixed-length txt file. The second box embraces Layout, which is for a txt file named CCSL_TABLE.txt. The contents of the second file denote the name, length, format, position, and description for each column in the ccsl.txt file.

Here’s the contents of the CCSL_table.txt file. 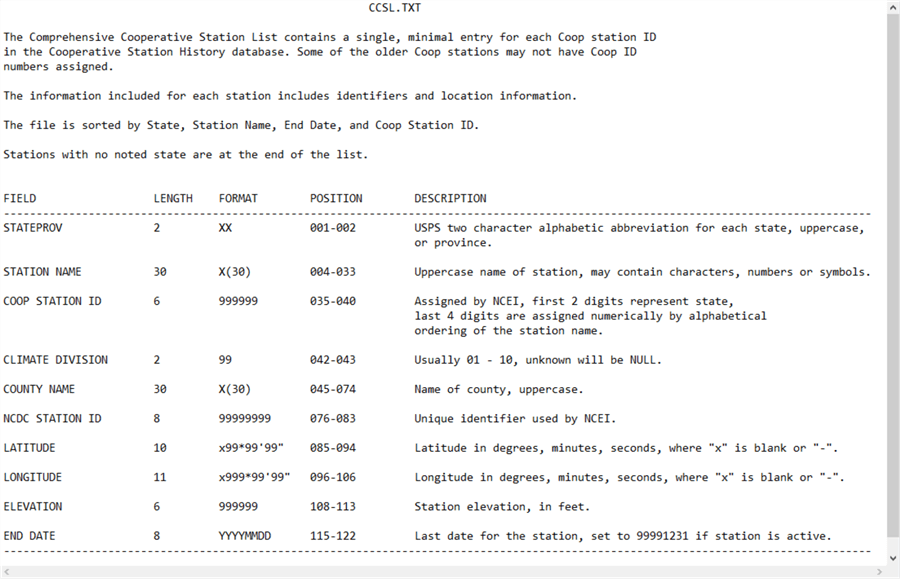 Here are two excerpts from the ccsl.txt file.

The following T-SQL script reads a subset of the contents from the ccsl.txt file into a SQL Server table.

The next screen shot is for the last eight rows in the results set from the preceding script.

The next query counts the number of weather stations by USPS two-character state/territory identifier.

Here’s the first five rows from the results set of the preceding query.

You may sometimes seek information about one or more weather stations that cannot be directly obtained from a weather station metadata column. In such cases, you may need an ad hoc query based on station name(s), COOP station id values, or even longitude and latitude values.

The following query lists metadata for weather stations in the Washington, DC area. The where clause uses STATION NAME with like operators. The like operators are used twice -- once for an embedded name of ‘Washington’ and a second time for the inclusion of ‘AP’ in STATION NAME.

After identifying one or more weather stations for collecting weather time series values, you can return to the NOAA website to collect historical weather observations for those stations. This section demonstrates how to collect weather for a station and export the weather observations from the NOAA website in a csv file. The prior section showed how to download and import a fixed-width text file from NOAA (that demonstration was for weather station metadata).

This section walks you through the steps for specifying and extracting a set of daily weather observations for a COOP station from the NOAA website. The example is for the COOP weather station at Washington Reagan National Airport. The remainder of this section presents the sequence of website screens you can encounter for collecting historical weather observations.

First, go to the internet address at ncdc.noaa.gov/cdo-web/search with your browser. This opens a blank form. The example in the following screen shows the request for weather data. 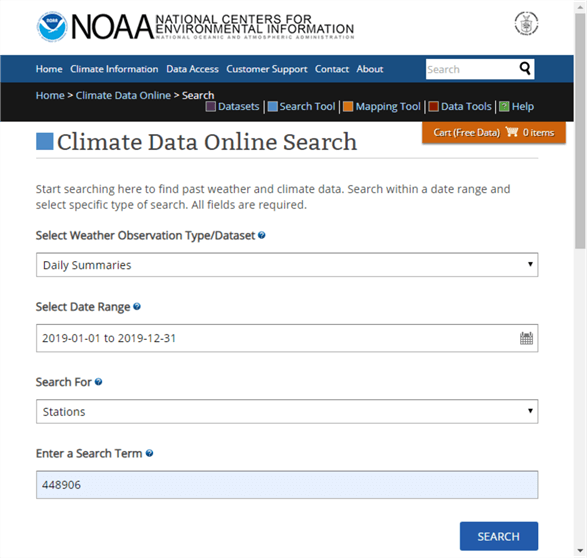 Clicking the Search button on the preceding screen shot opens the ncdc_noaa_gov/cdo-web/results page (next screen shot). 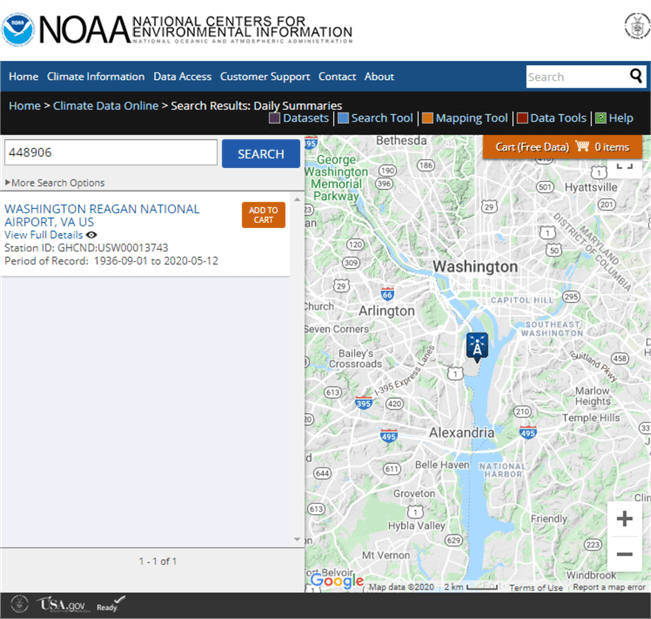 The next screen has a web address of ncdc.noaa.gov/cdo-web/cart. One key function supported by the screen is the specification of a file type for the return weather data. This tip demonstrates the use of the csv file format for output because it is relatively easy to read into SQL Server after you master a few details explained and demonstrated in the section. 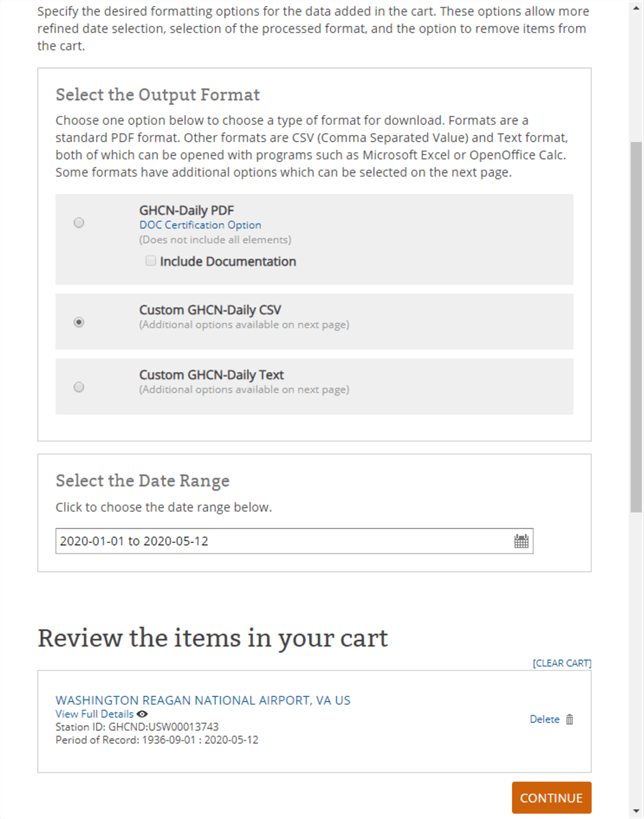 By clicking Continue on the preceding screen, you open what NOAA calls the custom options screen (see the next screen shot). 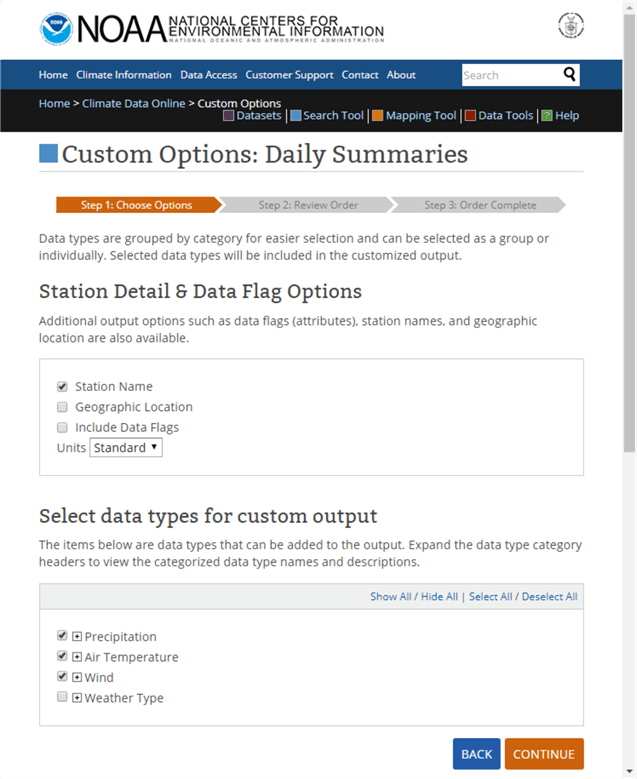 Clicking Continue towards the bottom of the preceding page opens a review web page (ncdc.noaa.gov/cdo-web/review) from which you can examine the weather order and submit the request to NOAA for processing and shipment to an email address. 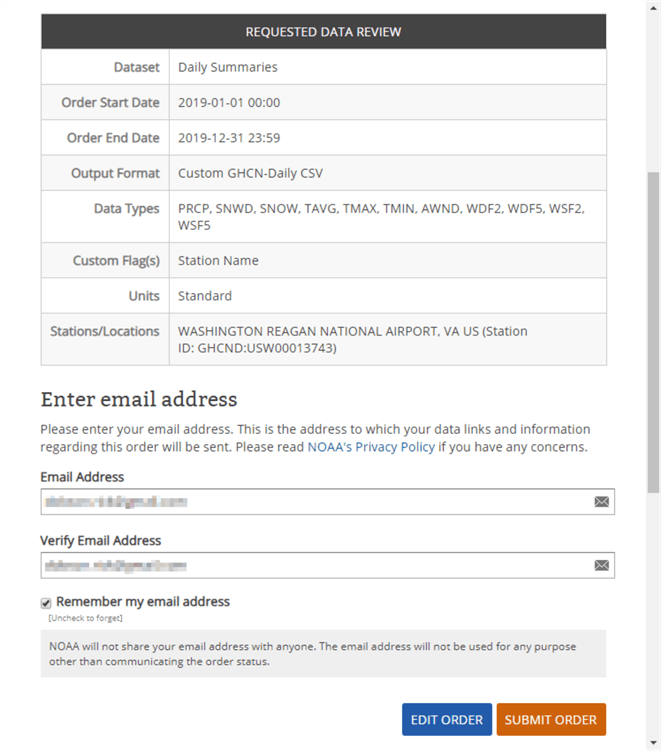 The following screen shot is an email message excerpt from NOAA to the email address in the preceding screen shot. By clicking the Download link for Order ID 2149805, you can download the csv file created with the NOAA website selections from the prior section. 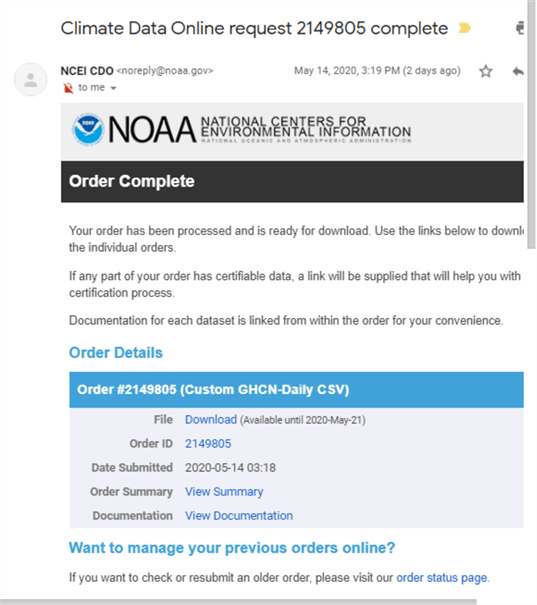 When working with transferring data via csv files between Microsoft products, such as from Excel to SQL Server, it is common to use a specification that appears in the following code window.

The preceding script ends with a select statement for all the columns in the #daily_weather_from_station_txt_flds table. This is the table to which the bulk insert statement attempts to copy data from the 2149805.csv file. Here is the results set from the select statement.

Here is a revised version of the preceding script that handles several issues.

There are three major sections to the script. The sections are separated from one another by lines of dashes (-).

Here are excerpts from the results sets in the preceding script.

There are four steps for re-creating the contents reported in this tip and confirming your grasp of how to make daily weather observations available from a SQL Server instance.

After you confirm that the download process and code are generating the same results as in this tip, you can adapt the process described in the preceding steps to collect weather data for whatever other locales your needs require.

Next, consider staying on the lookout for follow-up tips to this one that dive into more detail on how to process the metadata for weather stations and how to load weather data for multiple weather stations into a SQL Server data warehouse. Also, examine a forthcoming tip on how to assess seasonality with T-SQL code for weather data like those downloaded with the steps in this tip.