Selecting a Simple Random Sample from a SQL Server Database

In the business world, useful information about a population usually is gathered by studying a selected portion of the population. The portion is called a sample, and the process of selecting the sample is called sampling. Sampling is a fundamental operation for auditing and statistical analysis of large databases [1]. Many people in the database community are required to select a sample from a SQL server database. A simple solution on the web is to use the SQL statement "ORDER BY NEWID()". This solution may not fit all populations. For example, in FM radio markets, a station considers the age group of the target audience as an important determinant for the type of programming [2]. If 30 listeners are chosen randomly from a SQL server database that contains all listeners through using this method, the sample may not include listeners of a certain age subgroup. Thus, the sample might misrepresent the population. Additional sampling techniques are required to reduce this sample selection bias. Those database professionals who are unfamiliar with statistics may want to know more sampling techniques and the nature of the uncertainties created by these sampling techniques.

To sensitize that sampling is not merely to select some random items from a population, I quoted a statement from William Edwards Deming [3]: Sampling is not a mere substitution of a partial coverage for total coverage. Sampling is the science and art of controlling and measuring the reliability of useful statistical information through the theory of probability. To explore this science and art, the tip is devoted to two topics: sampling techniques, and sampling distributions.

To precisely explain sampling techniques, let’s study some definitions that were excerpted from [4,5,6].

Population: A population is a collection of data measured on all experimental units of interest to the researcher. The concept of experimental units herein refers to those objects upon which the measurements (or observations) are made. The collection of data, which is typically large, possibly infinite, either exists in fact or is part of an ongoing operation and hence is conceptual [4]. For example, the population could be "all customers of a manufacturer over the recent past and in the future".

Finite Population: A finite population is a population that consists of a finite number of experimental units.

Sample: A sample is a subset of data selected from a population [4], which is representative of the population.

Sample Size: The number of experimental units to be included in a sample [6].

Sampling: The process of selecting a sample from the population is called sampling [6].

Sampling Unit: An experimental unit that is selected for a sample [5].

and the population standard deviation

and the sample standard deviation

Table 1 shows the broad classification of probability sampling and non-probability sampling. Most sampling solutions on the web provided by the database community are using the simple random sampling method. Database professionals can find an appropriate method in this table according to the nature of the population. 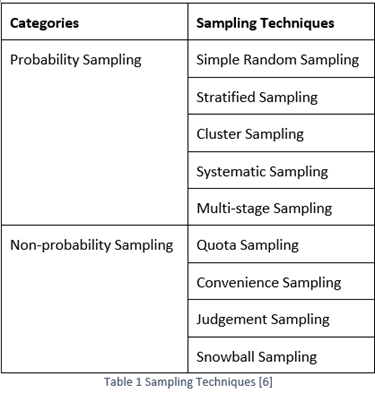 If we take samples of size

from a population of size is

, the total number of possible samples is computed by the combinations rule:

In a SRSWOR, every possible sample should have an equal chance of being selected as the representative of the population. Therefore, the probability of one sampling unit, such as unit

, being selected into any samples is obtained by the following equation:

There are two methods of randomly selecting a sampling unit [6]:

In the lottery method, each sampling unit is assigned a number. We select numbers one by one and all selected numbers will not be selected again. The process is analogous to drawing lottery numbers in a box. We can use a computer program to choose these sampling units randomly.

AdventureWorks is a fictional company that sells bicycles and cycling accessories. Microsoft provides a transactional database [8] with 27,659 online orders placed by individual customers. I have used the lottery method to take a SRSWOR of size 30 from this population.

The first step is to assign a number to each sampling unit. I created a temporary table with an identity column, then inserted all online orders placed by individual customers into the temporary table. This process assigned all orders with consecutive whole numbers:

The second step is to generate random numbers. I used the 4-step procedure [9] for generating 30 random integer numbers from the range [1, 27659]. Note that duplicates were discarded. Comparing to the population size 27659, the sample size 30 is so small that the chance of generating numbers with duplicates is low.

Table 2 shows the SRSWOR of size 30. It is noteworthy that we must resist a temptation of making any adjustment of the sample, even though some units in the sample does not look random. 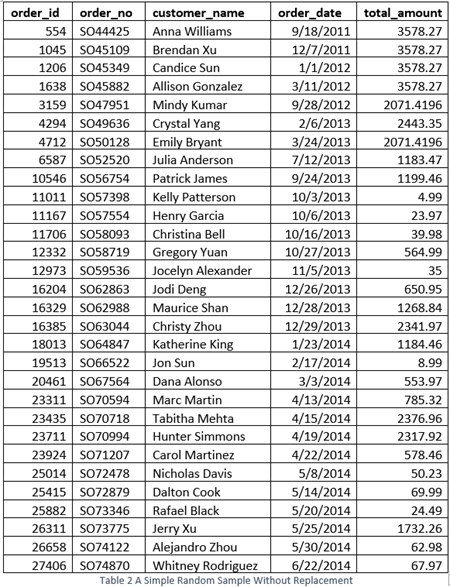 Step 1: Run the following T-SQL script to compute sample means and save them into a global temporary table:

Step 2: Run the following R script to retrieve data from the global temporary table and then plot a histogram: 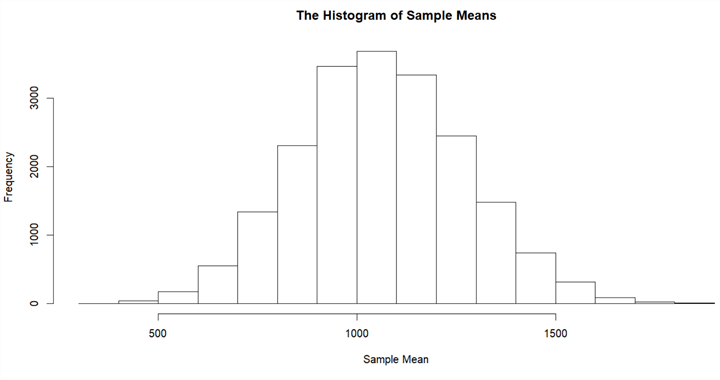 Figure 1 The Histogram of Sample Means

is the random variable with distinct possible values

is the size of the support, possibly infinitely;

is the probability mass function(PMF).

is the random variable with PDF

The PDFs of uniform distribution and the standard distribution have been given in [9]. We use these PDFs to calculate expected values of these random variables:

Before computing the expected value, let’s review some properties of a function

is an odd function, therefore the expected value of the standard normal random variable is 0:

The most important property of expected value is linearity, which is represented by the following equations [7]:

The variance of random variables has some useful properties. If

is a continuous random variable and

is a constant, the variance of the random variable

The process to compute the

is not straightforward. We have already known that a binomial distribution with parameters

can be considered to perform

independent Bernoulli trials with the probability of success

in each trial. We use

to denote a success of the

can be represented by:

It is noting that all random variables from

have the same value of variance, that is

. Then, we can use the property of variance to compute the variance of the random variable

Assuming that we have already known the following two equations, we use them to compute the variance of the standard normal distribution. The proof of the first equation is very tricky and requires more mathematical background. The second equation uses the fact that

decays much faster than

Then, we compute the term

in the variance equation:

. The mean of the sample of size

from the population, we obtain different sample means and sample standard deviations. We compute expected value and variance of the sample means:

We usually denote the expected value of the sample means by

and denote the standard deviation of the sample means by

. Then, we have these equations:

The law of large numbers (LLN) says that, as the sample size

converges to the true mean

pointwise with probability 100% [7]. LLN has two versions, and the proof of the weak law of large numbers is provided in book [7]. We have implicitly applied LLN in many simulations already. For example, I repeatedly ran programming scripts in [9] to find the probability of event occurrences.

are independent and identically distributed with mean

random variables constitute a random sample from an infinite population, as

To prove this theorem, we need to have some knowledge of the moment generating function (MGF), which is not required in this tip. In practice, we often use the approximation form of the CLT: for a large

is approximately normal distributed, denoted as

to be large if

. The approximation form of the CLT states that even if

The three main reasons make normal distributions be a keystone in statistics [12]:

Normal Distributions have the well-known bell-shaped curve shown in Figure 2. They have the probability density function (PDF) with two parameters 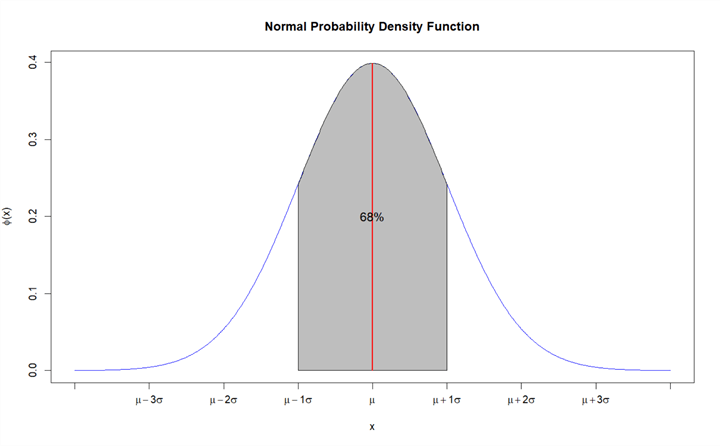 The following are some of the important characteristics of the normal curve [12,13]:

into the standard normal distribution, denoted by

is called z-score or z-value that represents the distance from the mean in standard deviation units, and

is the value of the random variable

The areas under the standardized normal curve have been tabulated. We also can compute the areas by using a built-in function in programming languages, for example, R language. Let’s look at an example in [13]:

, where the random variable represents the length of life (in years) of an electric can opener. If this can opener has a 1 yr warranty, what fraction of original purchases will require replacement? (Panik, 2012, Example 6.3)

First, we transform the normal distribution

into the standard normal distribution

The question asked to find the probability when

The gray area in Figure 3 represents the probability. We can either use the table of probabilities and Z-scores or use a computer program to compute the gray area. I used the following R function, and the function returned a value of 0.0174. It seems about 1.74% of original sales will require replacement because of the 1-year warranty. 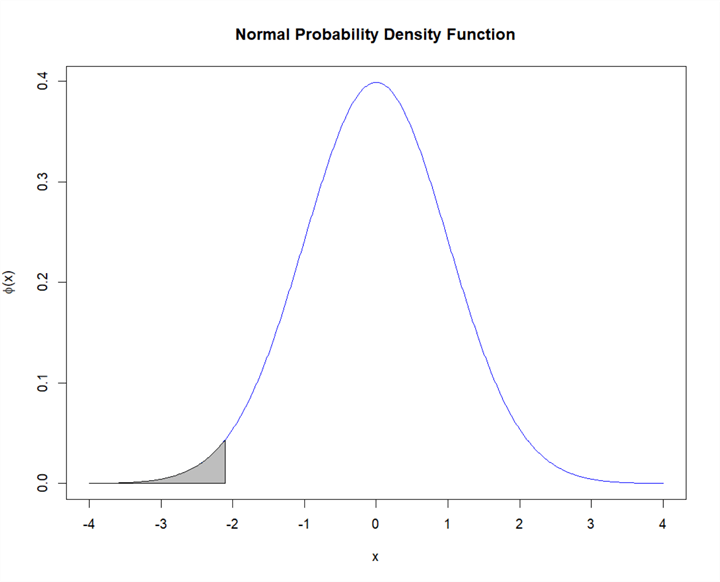 2.4 Sampling Distribution of the Means

The finite correction factor is used for a finite population:

In practice, the finite correction factor usually is ignored unless

Because the population standard deviation

is estimated by the sample standard deviation

We have defined a population with 27,659 online orders placed by individual customers. I used the following T-SQL statement to find the populations parameters:

We have already known

Compute the range of the z-scores

The probability of the event

as shown in Figure 4 was computed by the following R commands: 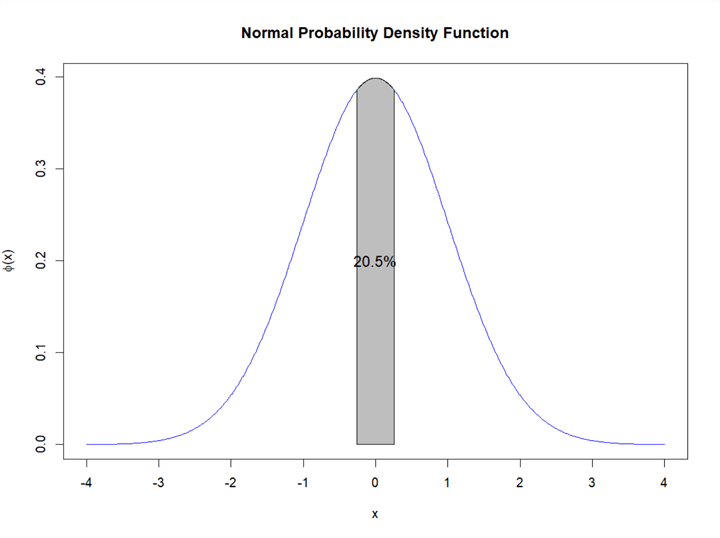 There are 20.5% of the chance that the sample mean is in the interval

When determining the size of the sample, a typical requirement is that the estimate should be within a 5% error of the true parameter. [16, 17] review other criteria: the purpose of the study, the population size, the degree of variability in the attributes being measured [18], the statistical power and one- or two-tailed statistical analysis.

The expected value represents the mean outcome when we repeat a random experiment many times. In the inferential process, sample means are used to estimate population means because of the central limit theorem. The central limit theorem states that for a population with any distribution shape if a sample of sufficiently large sample size n (n ≥30) is drawn from the population, the sample means are approximately normally distributed.

Sample size determination is the technique of determining the number of units selected for a sample. The level of precision and the confidence level need to be specified to determine the appropriate sample size. Several strategies are available to determine sample size, such as using a census for small populations, imitating a sample size of similar studies, using published tables, and applying formulas to calculate the sample size.