Do you administer data that changes over time? Are you a member of a team responsible for or just interested in modeling data changes over time? If your answer is yes to either of these questions, this tip may contain help you need.

This tip shows how to identify a pattern among a set of exponential moving averages and then evaluate the association of that pattern to changes in the underlying time series values. For example, you will learn to evaluate if rising moving averages signal the emergence of an uptrend or a reversal in the direction of change. Additionally, the rules for detecting a pattern in this tip are easy to code so that you can readily change the pattern among moving averages that you evaluate relative to changes in their underlying values.

While this tip examines daily stock price changes for demonstration purposes, you can substitute any set of data that change over time. The same kinds of data mining guidelines apply to moving averages for sales by product line, rainfall by city, or confirmed cases and deaths from different viruses across different countries.

The sample data for this tip

The following pair of screen shots shows some code for extracting a segment of time series data from the underlying data source for this tip. The data source is the yahoo_prices_valid_vols_only table in the for_csv_from_python database. This data was initially created and described in this prior tip, which, in turn, references an earlier tip on harvesting historical stock market data via a Python script. 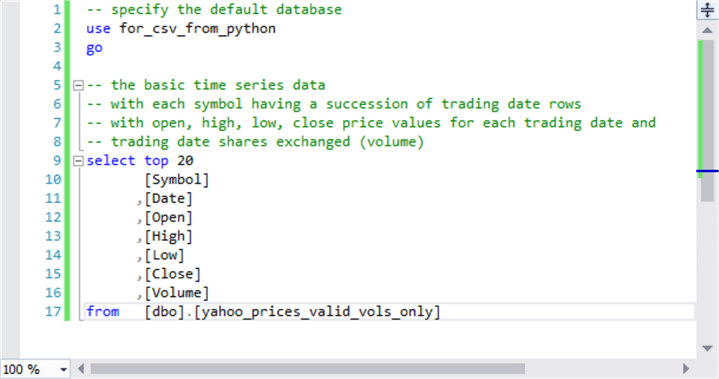 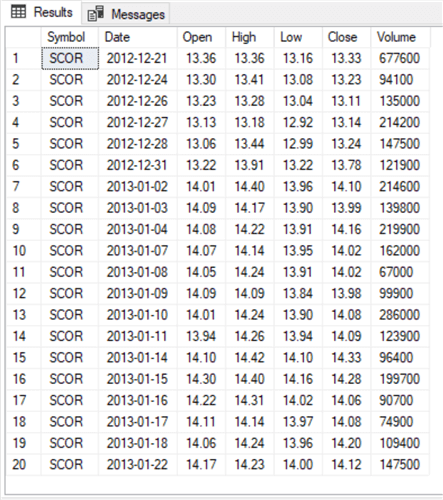 There are over 8000 distinct symbols in the yahoo_prices_valid_vols_only table. There are also 2709 distinct trading dates. Many symbols do not trade on each possible trading date, and beyond that some symbols do not trade in ample volume to provide a liquid market for exchanging shares. This tip’s script download file includes T-SQL code for deriving vital statistics regarding the symbols, trading dates, and average daily volumes by symbol for data from the yahoo_prices_valid_vols_only table. These simple queries are integrated into the following script that selects the top twenty most winning symbols in terms of close price change. Each symbol has an average daily volume of 250000 shares or more from the first through the last trading date.

Here’s the result set from the preceding script. The raw time series data for each of these twenty symbols is available as a download file for this tip. The remainder of this tip shows how to evaluate the correspondence between exponential moving average patterns and their underlying close prices. The analysis is for two subsets – one for symbols with an odd row number and the other for symbols with an even row number. If you choose, you can use the code from this tip with time series values for symbols in the data download file not reported on in this tip.

Here are some highlights from the output displayed in the results set. 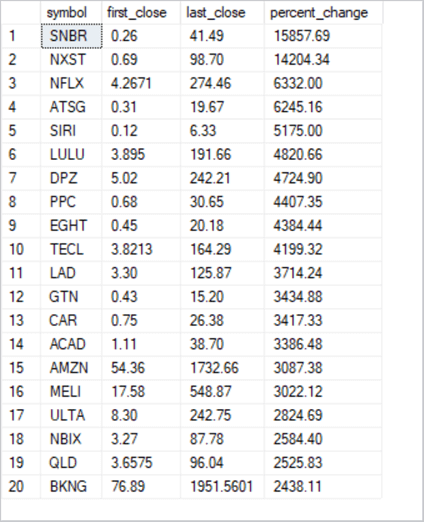 Creating a table of exponential moving averages with close, symbol, and date values

A major objective of this tip is to demonstrate a framework for assessing if during times when exponential moving averages are uptrending close prices also grow. The data mining approach taken to quantify the relationship has three steps.

The code for the second step appears next.

Close prices can rise, fall, or remain unchanged over a succession of trading dates. Also, uptrending among exponential moving averages can come and go. This tip presents T-SQL code for implementing a framework that assesses the relationship between uptrending in exponential moving averages and changes in close prices. From a more general perspective, this tip provides a framework for tracking changes between two metrics over time. For example, you can use the approach described in this tip to answer the question: do automobile sales decrease with rising unemployment?

This tip presents three processing steps for assessing changes in stock prices relative to uptrending in moving averages. The processing steps are for one symbol at a time. The following display shows the results from the third step in SQL Server copied to an Excel worksheet for the SNBR symbol. 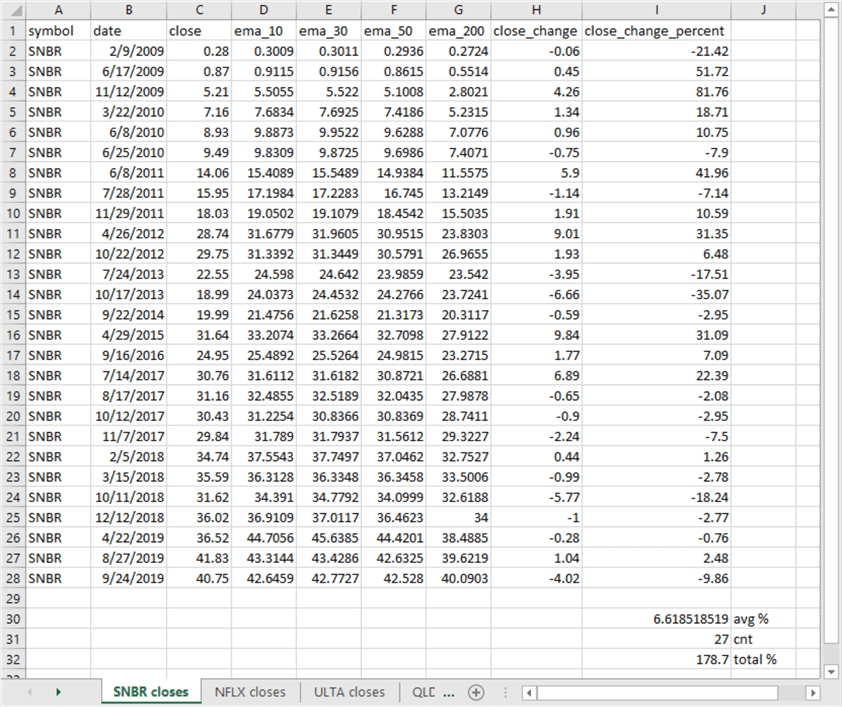 The same framework was applied to seven additional symbols from the table of the top twenty symbols in the "The sample data for this tip" section. The summary results for all eight symbols appear below. The results generally support the conclusion that uptrending moving averages are associated with positive close change percent values. 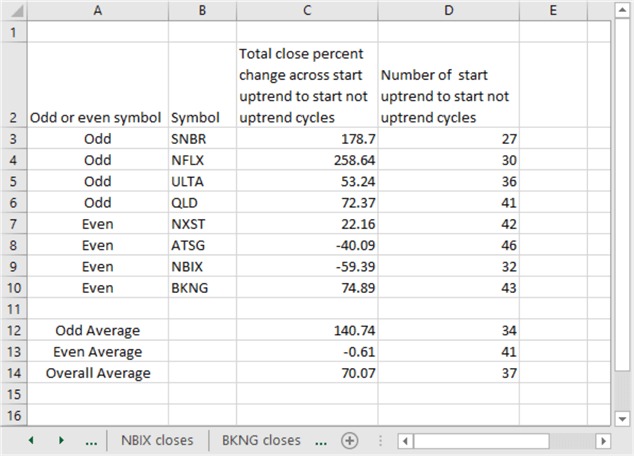 This tip does not aim to explore the nuances of the relationship between uptrending for exponential moving averages for close prices and close change percent across sets of trading dates. Rather its aim is to present a framework that empowers you to assess relationships for your own time series data. A future tip will build on the results presented here and illustrate a trading model that utilizes transitions for exponential moving average trends to project when to buy and sell stocks in search of achieving better close price gains. You should also keep in mind that the approach used for estimating when to buy and sell stocks for a profit also apply to other domains, such as if sales for product lines are likely to increase with income within a region or if rain within a region is likely to increase if rain occurs previously in a region to the west or south in the previous day.

There are at least four next steps for this tip.

The download available with this tip includes three files to help you perform the next steps described above. Here’s a brief description of each file in the download.