Demonstrate how to plot in Python financial time series from SQL Server. Use the plots to reveal the value of exponential moving averages with different period lengths to make decisions about time series values.

A popular aphorism about graphics is that a picture is worth a thousand words. It is also widely believed that facts are more impactful and memorable when accompanied by charts that reinforce key points. However, SQL Server does not enable the generation of charts. This tip shows how to make facts about time series data in a SQL Server database easier to grasp and recall when the time series data and exponential moving averages for the data are plotted in an accompanying Python application.

Data scientists often use charts as a key tool for exploratory data analysis. For example, it is possible to use charts to validate or reject key assumptions about data and to convey the findings about those assumptions to other project members as well as to decisionmakers. Also, charts for data in a SQL Server instance can provide guidance about the best next steps in a data modeling project. Database professionals can use charts to highlight the insights provided by data sources they manage.

The SQL Server source data table for this tip

This tip commences by reviewing its source data. The source data table (see the criterion in the following script) comes from a database named DataScience. Here is a script to display the table's column names and their data types.

Here is the output from the preceding script. 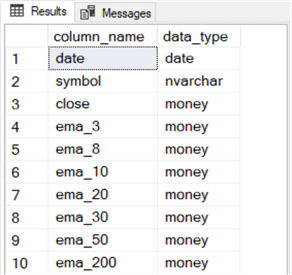 The next script displays the distinct symbols from the source data table.

There are just six symbols in this source table: SDOW, UDOW, TQQQ, SPXL, SQQQ, and SPXS. Each of these symbols is for an ETF security that tracks a stock market index. This tip demonstrates processing techniques for the TQQQ symbol, which tracks the leading stocks traded on the NASDAQ stock exchange. The time series data for all six symbols is available in this tip's download should you care to apply the techniques demonstrated in this tip to other symbols.

Here are a couple of SQL statements for reporting on the dates in the time series data.

This tip focuses on the data from just one year (2020), but you can practice the processing techniques for the other trading dates with the help of a csv file for all the data in the tip's download.

In this tip, you will find demonstrations of how to create, save, and display four time series plots. The processing is performed by a Python script that reads a csv file based on the SQL Server source described in the preceding section. After the data are read and processed to populate a Pandas dataframe in its first segment, the data are subset and then plotted in its second segment. A line of single-line comment markers (###...) separates the first and second segments.

Here is an image of the Python script for reading, subsetting, and plotting data in the first time series plot. The image is from the IDLE application. 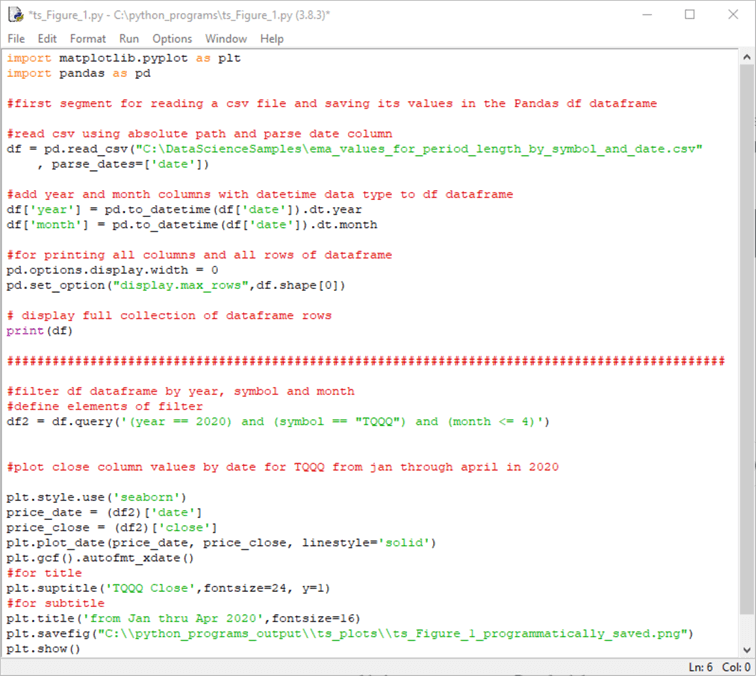 Here is the image presented by the plt.show statement in the preceding script. 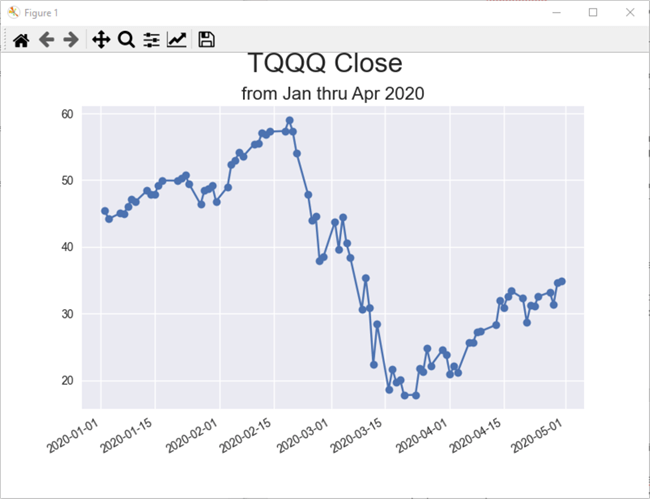 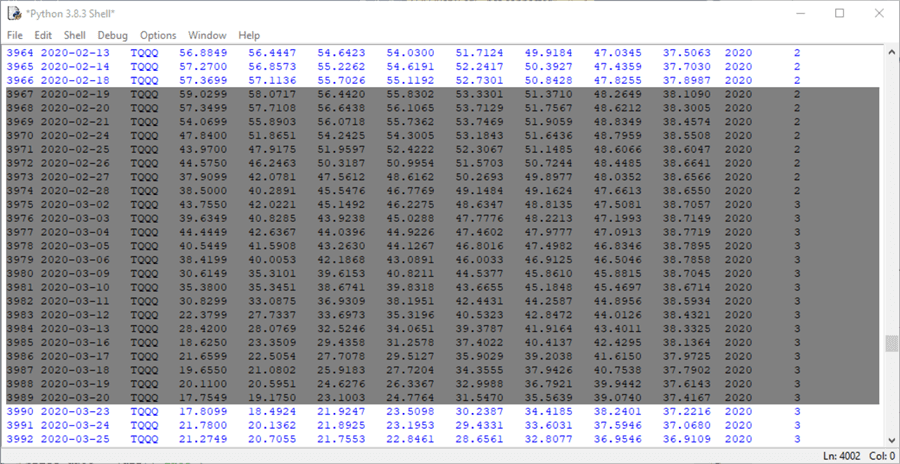 The preceding time series chart for TQQQ close prices offered an in-depth view of changes during February and March 2020 as well as the preceding and trailing months. For no preceding year going back to 2011 were the TQQQ close price declines during February and March greater than in 2020. The time series chart presented in this section gives a broader perspective of TQQQ throughout all the trading days in 2020. Here is what the chart looks like. 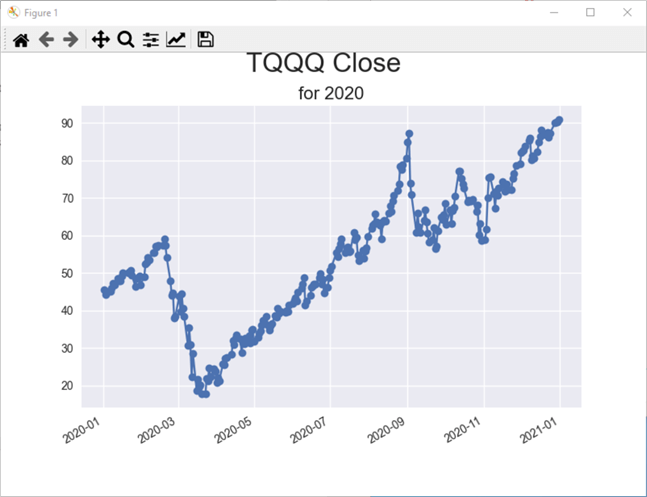 The code for the time series chart in this section is nearly identical to the script in the preceding section. There are just three changes to the IDLE window between the Python time series chart scripts for each section. These changes are highlighted and numbered by red bullets in the following screen shot. 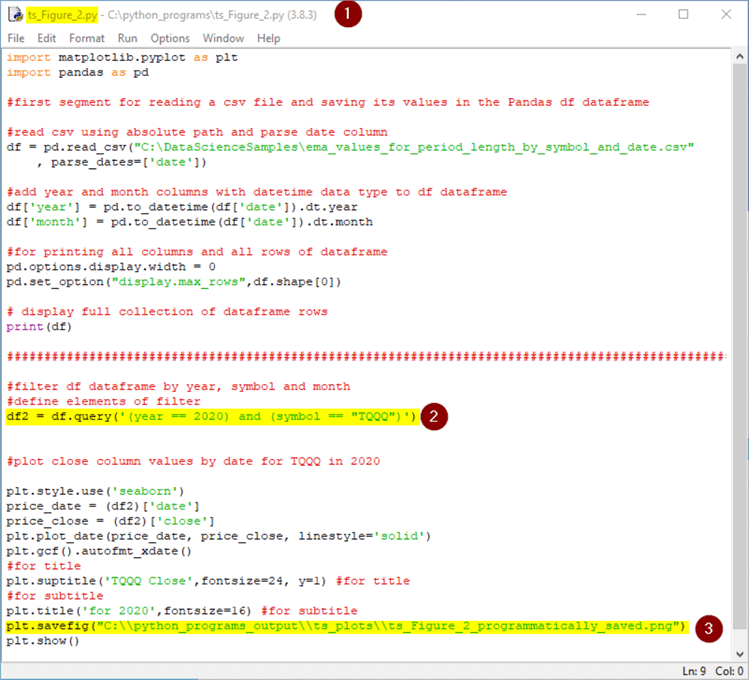 When plotting time series data, it is sometimes useful to display multiple time series within a single chart. This kind of chart can contrast the efficacy of two or more technical indicators for projecting future price performance. For example, it is sometimes the case that when an exponential moving average with a relatively short period length drops below another exponential moving average with a longer period length, then the symbol's close price is likely to continue declining.

By plotting close price, ema_50, and ema_200 in the same time series chart you can visually confirm if a golden cross or a death cross is yielding the expected outcome. The script in this section shows how to compare close prices over time with two exponential moving averages – namely, ema_50 and ema_200. The following script shows how to create a time series chart that compares movements over time for close prices versus ema_50 and ema_200. This section's code follows the same general pattern as the one displayed in the preceding section, but there are also some important additions. 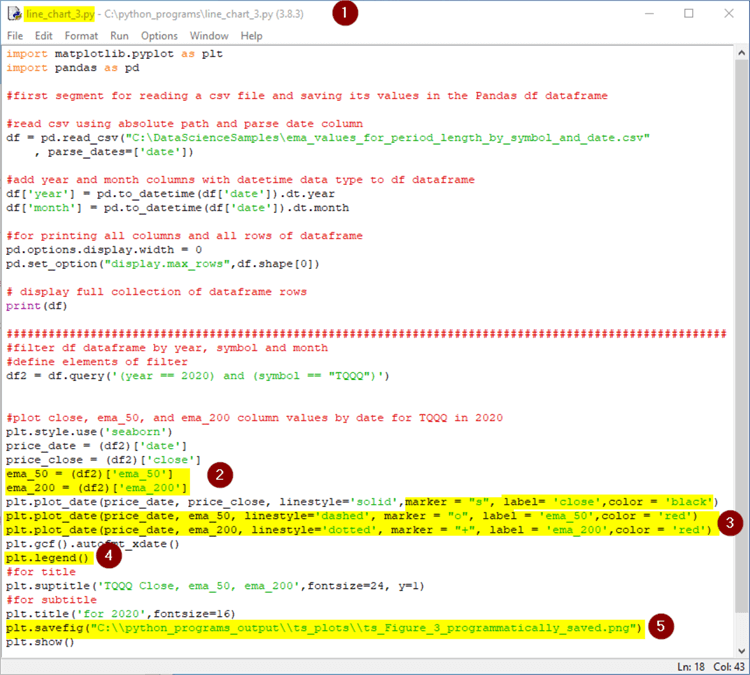 Here is the chart image that appears from the plt.show() function statement in the preceding script. 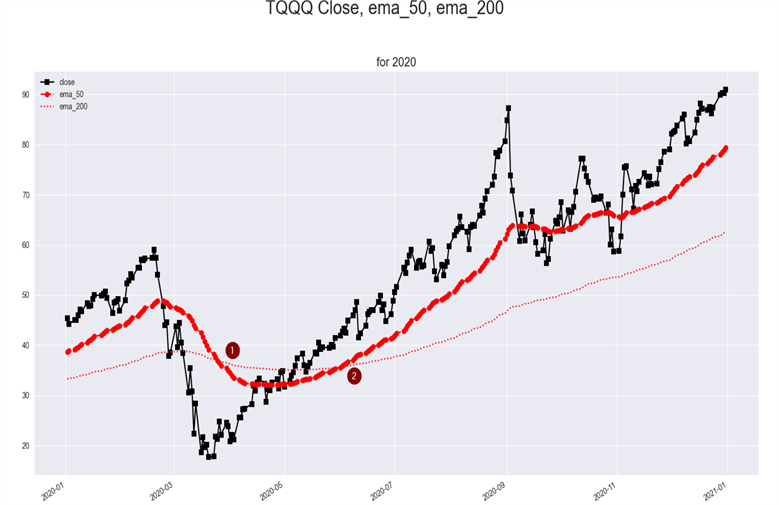 This section performs the same analysis as in the previous section, except that it replaces 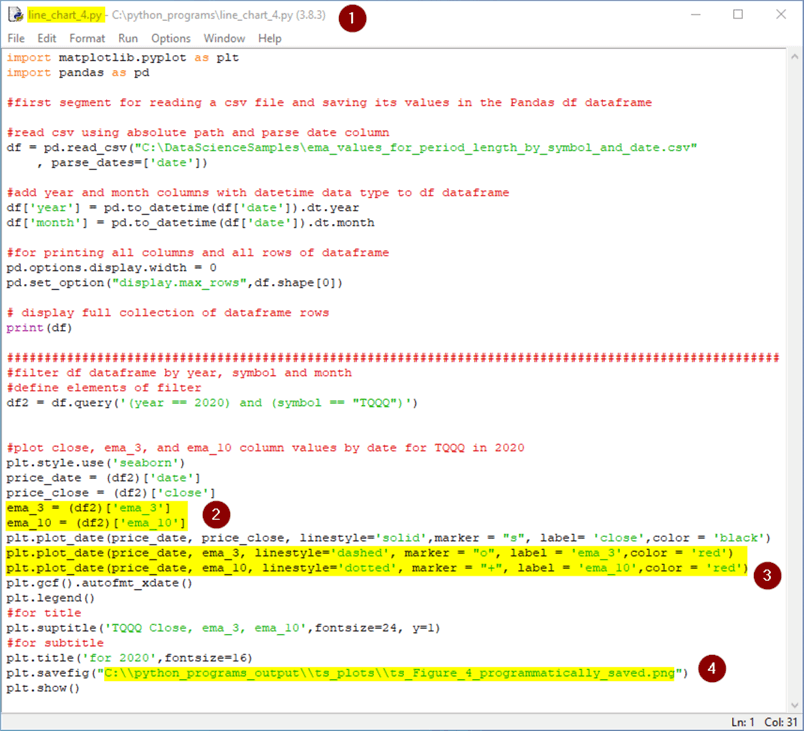 Here is the chart generated by the preceding script.

Numbered bullets on the chart denote key transition points in trend for one or more of the time series. 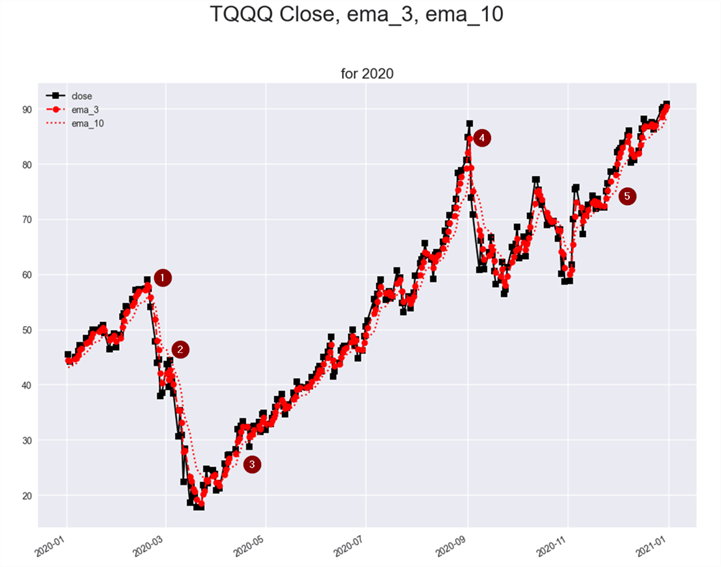 This tip's download file contains six files to help you get a hands-on feel for implementing the Python solutions in this tip.

After verifying the code works as described with the sample data file, you are encouraged to use other date ranges and/or symbols than those reported on in this tip. Also, you can gather your own time series data and compute your own exponential moving averages for plotting purposes.