As a SQL Server DBA you need to constantly take care of performance related issues before performance degrades to a point where it is noticeable and a problem to the business. There are several tools and ways to collect SQL Server performance related metrics and in this series of tips we’ll demonstrate the ways to build a centralized, integrated and flexible data collection and analysis system. In Part1 I demonstrated usage of PowerShell scripts to collect performance metrics from multiple servers into a central repository database and this tip we will look at SSIS components.

In this tip we’ll build an ETL package which will read raw performance data from the central repository database (PerfCollection), classify data based on predetermined performance metric thresholds and load it into a data warehouse. The data uploads are incremental and could be triggered from SQL Server Agent Jobs. The package was created using SSIS 2008, but could easily be upgraded to higher versions.

PerfDWH Db – serves as a data warehouse for the OLAP cube. The PerfDWH Db schema is shown below: 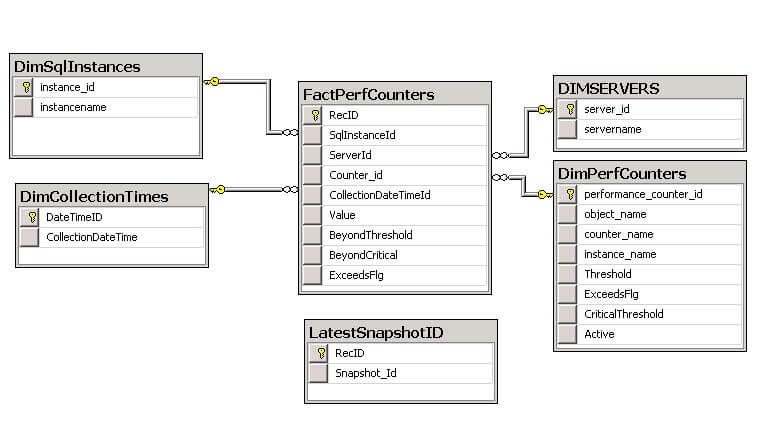 Here are short descriptions of the PerfDWH Db tables:

I'll demonstrate the package deployment to a SQL instance, which is preferable from a security point of view, however it could also be deployed to the file system. Alternatively, it could also be converted into a SSIS 2012 project model and deployed into the SSIS catalog, which allows flexible configuration and logging features.

Deployment steps are as follows:

2: Open CreatePerfDWHDb.sql script, change the location of DB files if required and execute it to create PerfDWH Db and included objects.

3: Import the package into the central server by following the below steps: 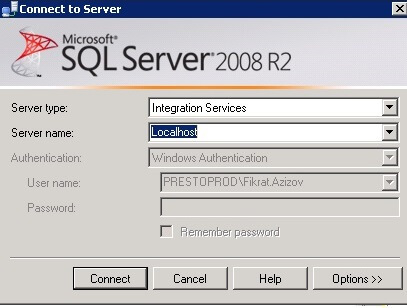 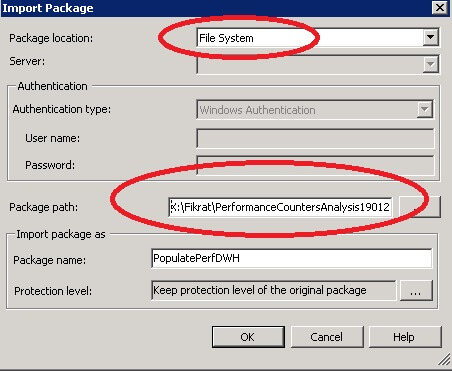 Package's name will appear under MSDB as shown below: 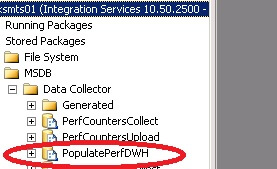 4: Open the CreateSecurityObjectsDWH.sql script, specify domain name, username and password to create a credential, which will be used later by the collection jobs, and execute it to create a credential and proxy accounts for SQL Agent. The domain user account would need to be a member of the db_datareader group for the PerfCollections database and member of the db_writer group for the PerfDWH database to be able to read from the source and write to the destination database.

5: Open the CreatePerfDWH_ETLJobs.sql script, specify the instance name, where the SSIS package have been deployed (see step 3 above) as well as the data processing frequency value for the local variable @ProcessFrequency_Min and execute it to create the data processing job. The ETL package will be running under the proxy account created in step 4.

The package is using configuration settings based on environment variables as shown below:

So, we'll need to create the following environment variables (see below): 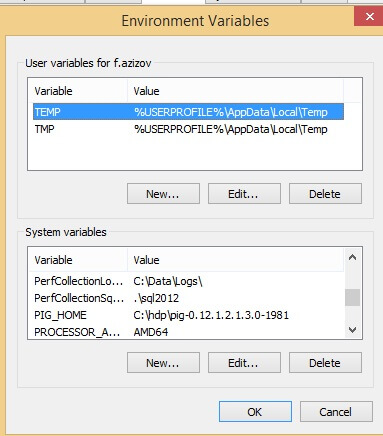 Note: You may need to restart the server once the environment variables are configured, in order for them to take effect.

Below is the package structure: 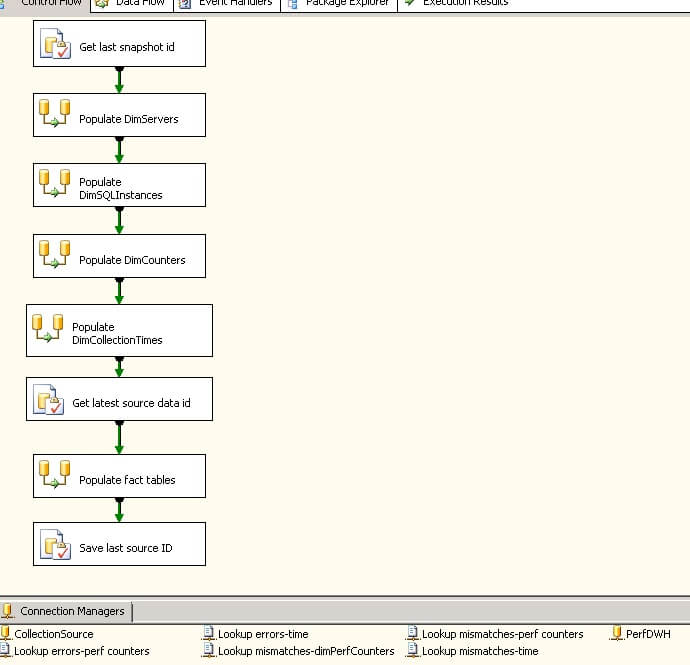 Given the nature of this package, it's unlikely that dimension values involved here would be changed after insertion. So, I've used Fixed (Type 1) Slowly Changing Dimensions for all dimensions.  You can read more about various types of dimension change tracking in this tip.

Here is the description of package components:

Dimension tables have similar population logic (see sample below) - they compare source and destination tables then insert missing rows into the destination. I've preserved business/production keys in case of dimensions like DimSQLInstances and DimServers. However, I had to create surrogate keys for dimensions DimCounters and DimCollectionTimes. 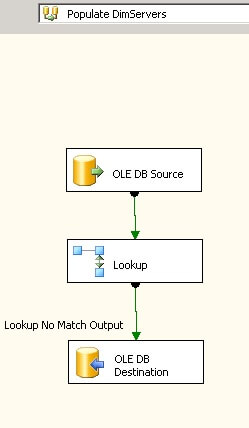 2: Find matching counter configuration in PerfCounter_Groups table in order to classify the metric. Please note, only metrics with 'True' values in their 'Aggregate' filed would be eligible for upload.

3: Validate if 'ExceedsFlg' field is set to 'True'. 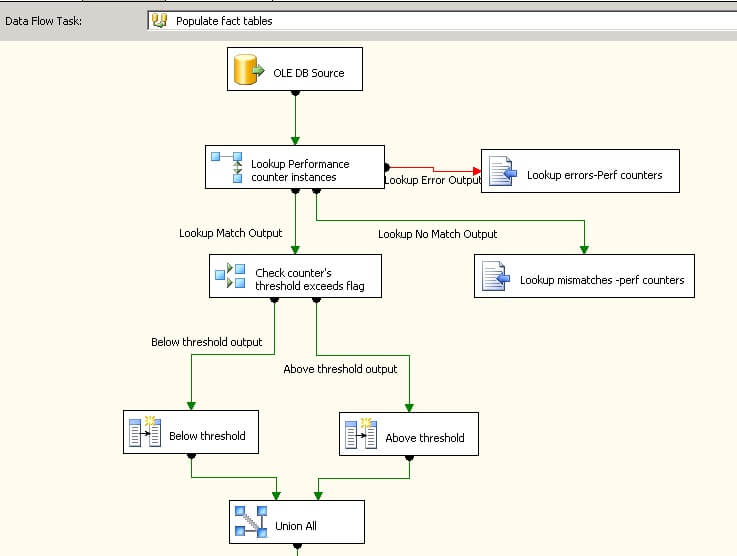 7: Write into the destination table 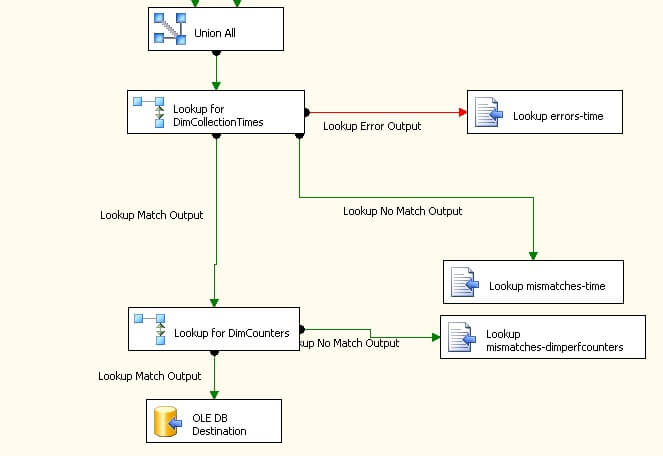 Note: Lookup components will log lookup mismatches, as well as errors into csv files located in the folder, specified by the PerfCollectionLogFolder environment variable.

SQL Server Monitoring with PowerShell and the SQL Server Platform: Analysis and Reporting (Part 3 of 3)