I want to create a line chart in SQL Server Reporting Services. I have two series I need to plot on the chart, but one series has high values while the other series has much lower values. The second series is being pushed flat against the X-axis by the first series. How can I plot both series without losing detail in both series? I’d like to compare the growth or change between the series.

When plotting two-line series with a big difference in absolute values on the same chart, the series with the lowest values will lose detail, as you can see in the following chart:

Here the line for the sales amount of the Accessories category are plotted against the X-axis, since the Y-axis has a very large scale. This makes it seem the Accessories sales approach zero, while in reality they are not. They are multiple possible solutions:

In this tip, we’ll focus on the last option while also showing the alternatives.

In this tip we’ll use the AdventureWorks 2017 data warehouse, which can be downloaded from Github. We’ll retrieve the online sales for the categories Bikes and Accessories of the year 2013. Bikes have very high revenue (since the price is much higher), while the revenue of accessories is considerably lower. The following query satisfies our requirement:

The result set is as follows: 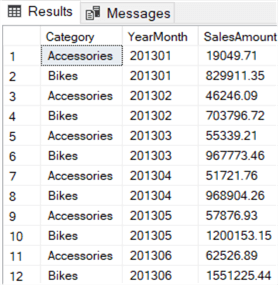 Let’s start by turning this data into a line chart. Create a new report, with a connection to the AdventureWorks data warehouse and add a new data set using the query from the previous section. Right-click on the report canvas and choose Insert > Chart. 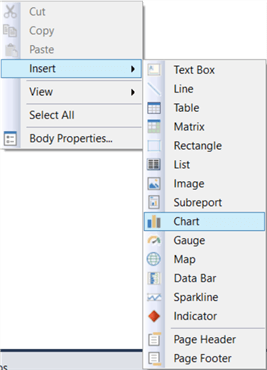 In the dialog, choose the line chart type.

Use the following configuration for the chart data: 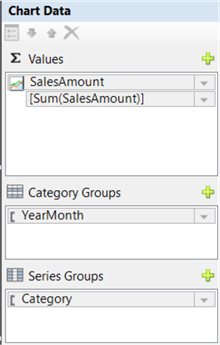 With default settings (and a decent title), we get the line chart from the introduction:

On the horizontal axis, the interval is changed from Auto to 1. This makes sure that all months are displayed on the axis. 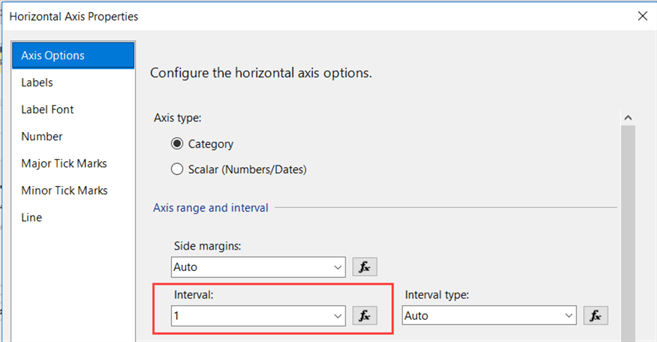 If you want to enable a scale break, right-click on the vertical axis and go to its properties. In the Axis Options pane, select the Enable scale breaks option. 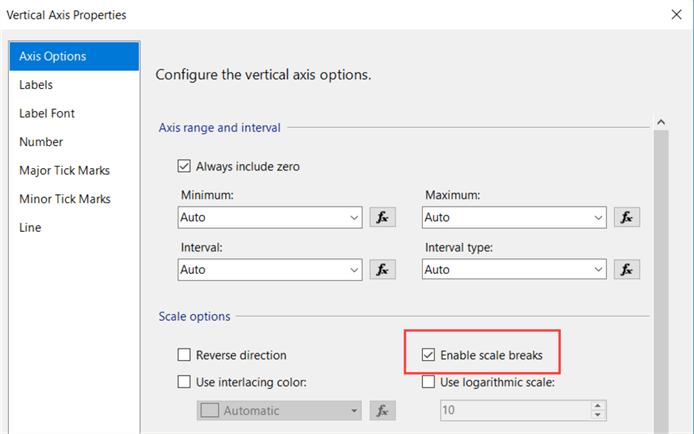 The line series for the Accessories now shows all detail. However, the chart becomes more cluttered by the not-so-subtle scale break “rip”. Furthermore, viewers of the chart might be tempted to compare the two lines in absolute values. However, the horizontal axis is now quite misleading. In the bottom part, the gridlines are closer together and the difference between the minimum and maximum value is a bit over 40,000. In the top part, the gridlines have more space between and the difference between the min and max value is about 1,000,000! A huge difference although the two lines look the same.

Plotting the two lines on separate chart will also allow you to compare evolution, but it suffers from the same shortcomings since the axis will have the same scale issues.

Before we can create a chart with dual axis, we need to make some adjustments to the query, so we have two measures (one for Bikes, one for Accessories) for each month:

First, we calculate the two measures in the inner query by setting the value to NULL if it’s one category or the other. In the outer query, we aggregate those measures by the month. The results look like this: 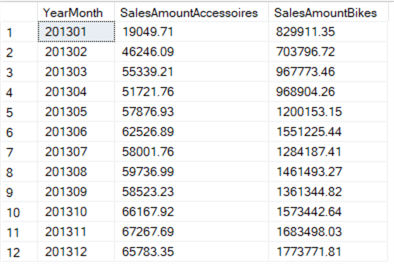 Add a new data set to the report using this query. Add a new line chart and configure the chart data as in the following screenshot: 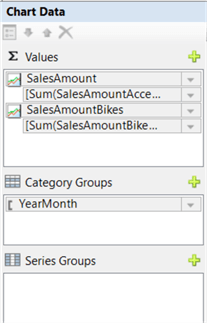 Right-click the line of the Bike series and go to the Series Properties. 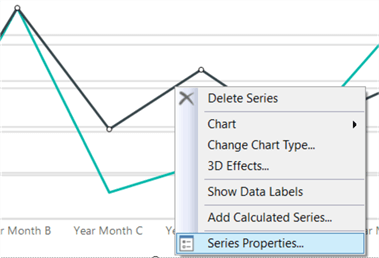 In the Axes and Chart Area pane, set the vertical axis to Secondary. 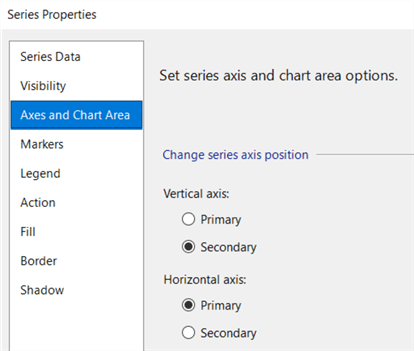 This results in the following chart:

There are some issues with this type of charts:

A solution to the problem is to index the data. With this process, all data points are related to the first point in the data set. The first point is scaled to 100 and the other points are scaled accordingly. This results in a chart where two lines of very different scale can be compared with each other. Instead of comparing actual values, you’ll be comparing the growth (or decline) of the trend.

First we need to adjust our query. The formula to index the values is as follows:

Using the window function FIRST_VALUE, we can easily incorporate indexing into the query:

Using this data set, we can create a new line chart with the following configuration: 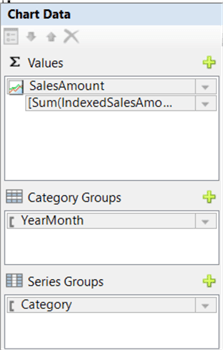 When we preview the report, we get the following visualization:

You can see both series start at the same point: 100. Now that both series are indexed, it’s clear Accessories had a much bigger growth in the first 3 months than Bikes, while Bikes has a steadier growth.