I need a way for determining if three or more means for different groups are statistically equivalent or not. Please implement the solution framework just like other tests available in the SQL statistics package. Finally, please explain the code so that I can modify the solution or equip myself for building custom statistical solutions.

This tip is one in a continuing series on the SQL statistics package. The initial tip for the package focuses on how to implement a basic selection of descriptive, inferential, and predictive statistical techniques. A second tip dives deeply into inferential statistics with coverage of how to perform five different kinds of t tests. The t test is a useful test for assessing if the difference between means for two groups or one group and a standard value are statistically different. However, t tests are not appropriate for telling the difference between more than two groups.

Analysis of Variance (ANOVA) tests target making an inference about whether three or more groups have means in which at least one group mean is statistically different from the other group means. For example, you could assess if average annual income varies by years of experience categories, such as 0-2 years, 3-5 years, 6-10 years, 11-20 years, or more than 20 years. Alternatively, you can determine if three or more machines are producing widgets of the same size. Just as there are several kinds of t tests, there are also several kinds of ANOVA tests.

This tip introduces ANOVA for the most basic kind of test (a one-way test for a single factor). You will learn core concepts about how to setup, implement, and interpret the results of a one-way ANOVA. The tip also demonstrates how to look up programmatically critical values for determining when and how much the group means in a factor are statistically significant. This presentation will ready you to move on to more complex kinds of ANOVA tests as well as supplementary tests, such as post-hoc tests for assessing the difference between pairs of group means given a statistically significant difference over the set of factor level means.

Knowing about different kinds of statistical techniques and how to quickly implement them with the SQL statistics package will equip you to participate in data science projects using data that is already in SQL Server databases or data sources that can be easily loaded into SQL Server.

What is a One-way ANOVA

A one-way ANOVA is for a single factor with three or more levels. The levels within a factor can be denoted by a name, such as machine 1, machine 2, machine 3 or for a classification variable of a numeric variable like years of experience. The set of machines or the classification ranges constitute a factor.

The data for a one-way ANOVA consist of a sample of observations for each level within a factor; the sample size per level can be the same or different as the other levels. The one-way ANOVA test is for a null hypothesis of no difference between the set of level means. If all the levels, usually three or more, have the same means within the bounds of statistical significance, then you accept the null hypothesis. If at least one level has a mean that is statistically different from the rest of the means, then you reject the null hypothesis that the means for all samples are the same.

At a root level, a one-way ANOVA partitions the sum of squared deviations from means for a set of observations residing in factor levels. There are three partitions in the one-way ANOVA.

Mean square values represent the variation in means. For example, the factor mean square represents the variance of factor level means from the overall sample mean. The residual mean square denotes the variation of individual observation values within levels from the mean of the observation values for each level. The ratio of the factor mean square divided by the residual mean square is distributed as an F distribution - named after the famous statistician Ronald Fisher. Therefore, the F value for the ratio of the mean squares is a computed F value. As the ratio grows in value, the likelihood of a factor having statistically different means for its levels also grows.

You can look up the F value for critical values to determine the cut-off F value at different probability levels for level means being statistically different. Critical F values are defined by the intersection of three terms.

The F test in an ANOVA is always a one-way test for statistical significance. The computed F value must always be greater than the critical F value to reject the null hypothesis. Another popular F test for the equality of variances between two different samples is most typically used as a two-way test; you can learn more about this other type of F test here and here.

Unlike the F test to reject a null hypothesis of equal variances, the critical F value for an ANOVA in a one-way test is for at least one level mean being statistically different from at least one other level mean. Recall that the computed F value is the ratio of the factor mean square divided by the residual mean square. The computed F value is statistically significant only if it exceeds a critical F value at a specified probability level. Therefore, you use the Excel F.INV.RT function, instead of the Excel F.INV function, for calculating critical ANOVA F values.

Each probability level can have its own tab within an Excel worksheet file. The following three screen excerpts are from the Critical F values for ANOVA from Excel Functions worksheet file. Each excerpt is for a separate probability level; the tab name reflects the probability level values of .05, .01, and .001. The F.INV.RT function returns the calculated critical F values for degrees of freedom specified in the first column and first row of each tab. Each tab has the same layout of values, but the cell values which appear in a tab vary according to the probability level specification in the Excel function parameters on a tab, which are distinct for each tab, and the degrees of freedom across cells within a tab. 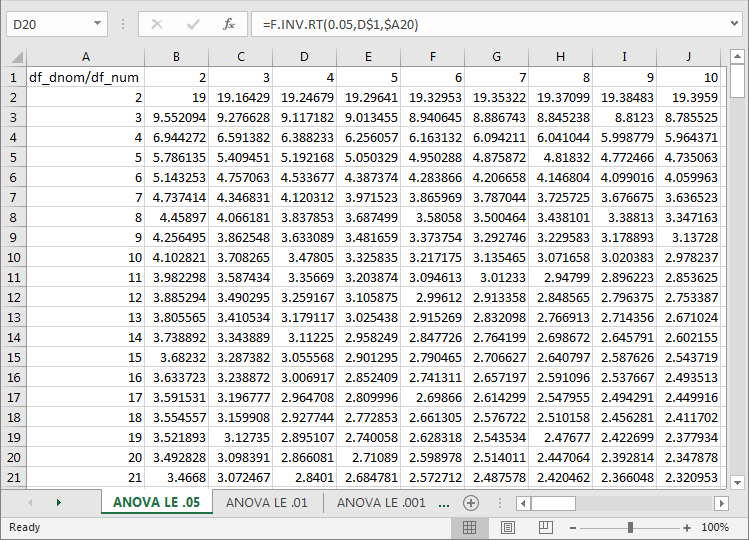 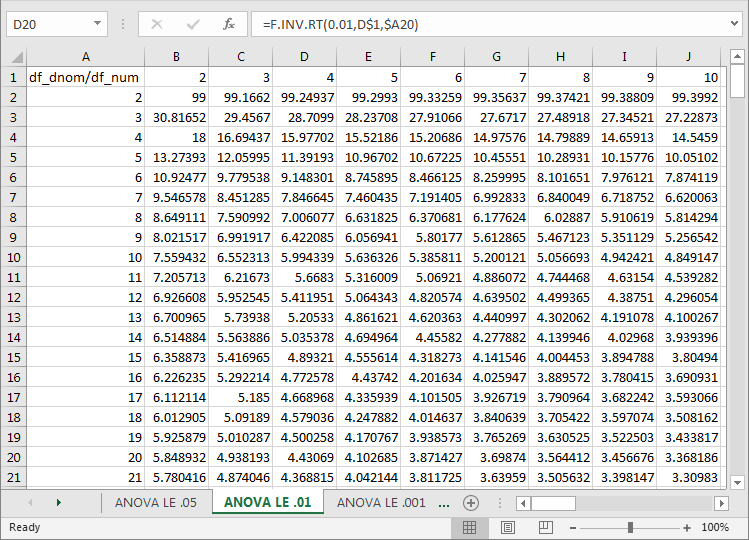 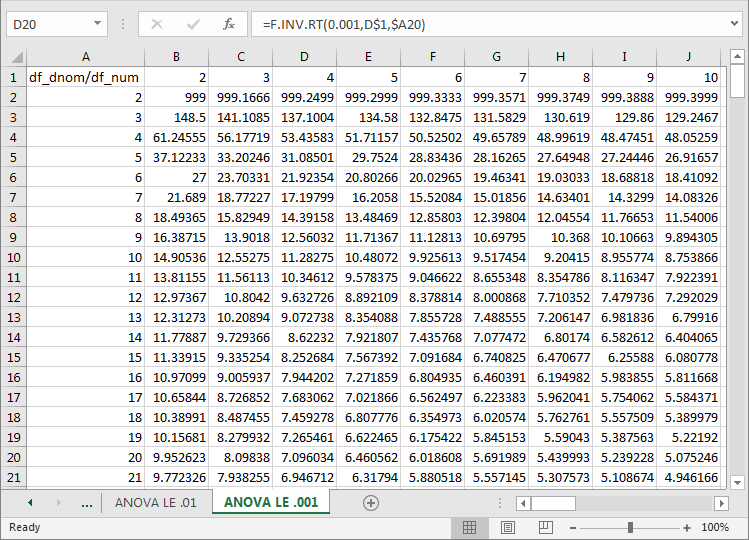 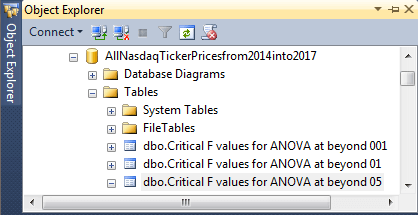 The Import/Export Wizard was used to transfer the tabs from Excel to SQL Server, but there are many other options, including at least SSIS and the BULK INSERT command. The use of the BULK INSERT command is demonstrated later in this tip for importing a fixed width text file that contains data to serve as a sample of observations for a one-way ANOVA.

Here's an Object Explorer view of the specification for the Critical F values for ANOVA at beyond 05 table. 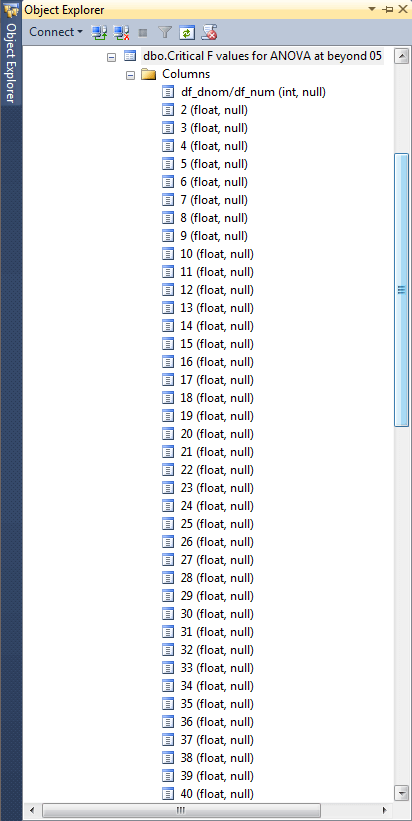 The next screen excerpt shows values from the Critical F values for ANOVA at beyond 05 table matching the excerpt of values appearing for the cells from the ANOVA LE .05 tab in the Critical F values for ANOVA from Excel Functions worksheet file. This worksheet tab excerpt appears in a preceding screen shot. The following excerpt shows the corresponding values transferred from the worksheet to SQL Server. The transfer was implemented for all populated cells in the tab - not just those showing in the excerpt. Additionally, the two other tabs named ANOVA LE .01 and ANOVA LE .001 were also transferred to SQL Server tables denoted above in an Object Explorer view.

Notice that the critical F value for 4 and 20 degrees of freedom at the .05 table rounds to the same value as appears in the workbook tab. The SQL Server table does, however, contain more digits after the decimal point beyond those showing in the workbook tab. In fact, there are often more than six places after the decimal, and the use of the float data type accommodates a larger set of digits beyond just six. We'll return to a related issue later when verifying a computed F value for a sample set of data in a published, worked example of how to compute a one-way F value. 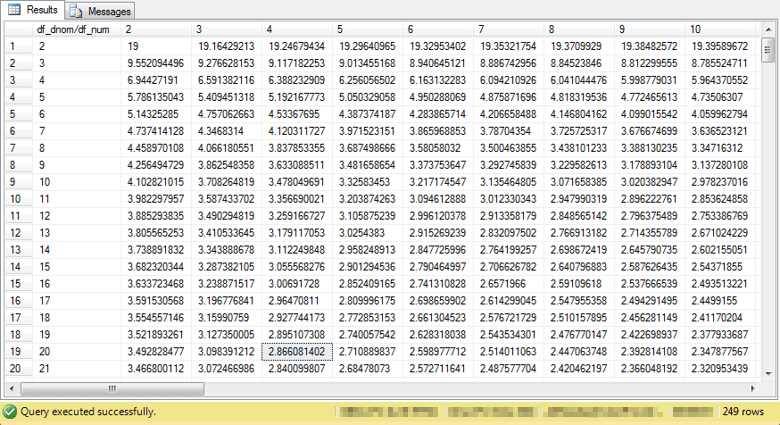 Overview of generating and evaluating an ANOVA computed F value

There are three steps to generating and evaluating of an ANOVA computed F value. This section covers some overview code for managing the process that concludes with a computed F value. The next section presents the stored procedure to compute the F value.

A summary of the three steps appears below.

The screen shot below displays an excerpt of the output from the third step. There are twenty-six rows of output in total.

If you review the intermediate results from the publication with the sample data and computational example, you can discover that it reports a computed F value rounded to 4.86 based on a factor mean square value of .000034 divided by a residual mean square value of .000007. The F value reflects rounded mean square values to six places after the decimal point. However, as noted above the mean square floating point values extend beyond just six places after the decimal point. The SQL code in the stored procedure computes an F valued based on all available places for the mean square float data type values. As a consequence, this tip reports a computed F value of 5.20606060606061, which is more reflective of the original source data than the previously published value of 4.86.

The stored procedure code for the computed F value

As the preceding script indicates, the name for the stored procedure that calculates a computed F value and stores the result in an output table is compute_anova_one_way_F. This stored procedure performs seven essential functions.

Here's the script for creating the stored procedure. If any of the code in the following script is confusing, consider reviewing the "What is a One-way ANOVA" and "Deriving Critical F values for ANOVA tests" sections. They provide a good textual summary of how to create and interpret a computed one-way ANOVA F value. The brief comments below are meant primarily to help you locate key code elements in the stored procedure code.

After you confirm your installed version of the code and data works as described in this tip, you can use your own data for testing the equality of means in other samples of data. Start by populating the ##factor_level_scores global temporary table with the new sample of data you want to use instead of the sample data used here. Alternatively, if you will always be using data from a file or table in an ANOVA, then you can modify the code to always refer to input data from that file or table. Then, invoke the compute_anova_one_way_F stored procedure and show the results by displaying the contents of the ##output_from_compute_anova_one_way_F global temporary table.