Because of physical constraints, economical constraints, time constraints or other constraints, it is usually impractical to gather information from every unit within a population to determine the characteristics of the population. For decision making, data analysts want to use inferential statistics to estimate the population parameters from sample statistics. For instance, Adventure Works Cycles [1], a fictitious company, has 18,484 registered customers. Knowledge of the average income of these customers and the proportion of bike buyers in all customers help to make marketing decisions. How do data analysts use inferential statistics to draw conclusions about population parameters by using sample statistics?

The Microsoft sample database AdventureWorksDW2017[1] contains a list of 18,484 customers. We can access the list through the view "vTargetMail". Even though the view includes the columns "YearlyIncome" and "BikeBuyer", for demonstration purposes, we assume that we do not have data in these two columns. Thus, we cannot compute the average value of customer yearly income or count the number of bike buyers directly from the database table. We also have an assumption that the population standard deviation of customer yearly income is 32,285. When we have a considerable amount of historical data, we can have this kind of assumption [2]. We use an unbiased estimator when the population standard deviation is unknown.

We randomly selected 35 participants from the customer list who reported their yearly incomes and told whether they owned a bike. With the sample of 35 observations, we constructed confidence intervals that contain the true values of the population mean and proportion, respectively. This tip shows a step-by-step solution to use sample statistics to estimate population parameters.

This tip is organized as follows. In Section 1, we explore concepts of statistical parameter estimation with some practice examples. Section 2 introduces the construction of large-sample confidence interval for the population mean. We construct a large-sample confidence interval for the population proportion in Section 3. Next, in Section 4, we briefly introduce parameter estimation for a small sample where the sample size is less than or equal to 30.

In this section, we illustrate some concepts involved in parameter estimation. Another important type of inferences is the testing of statistical hypotheses, which is beyond the scope of this tip. I assume you have had some previous experience with probability, random variables and their distributions, and sampling. 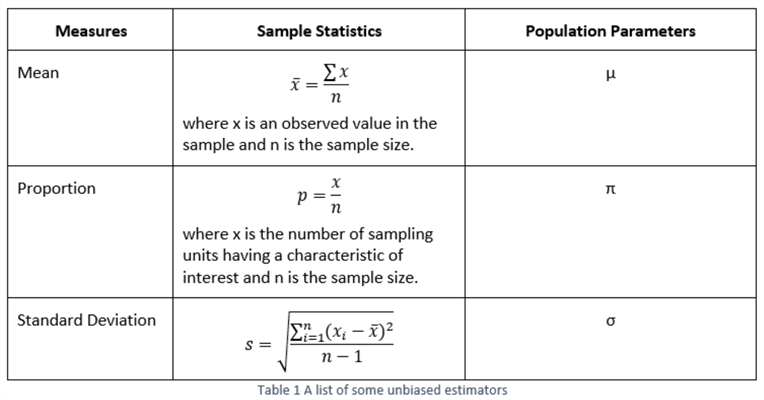 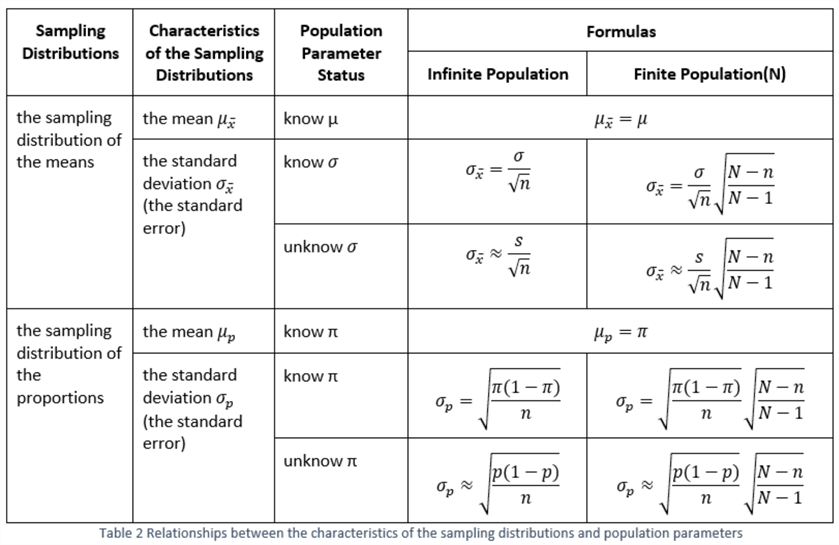 To study point estimation via simulation, I installed the database AdventureWorksDW2017 [1]. Then I used the following T-SQL script to select a simple random sample of size 35 from 18,484 customers:

Table 3 shows a random sample generated by the T-SQL script. I also stored this sample in a database table "SurveyResponse" for future reference. For simulation purposes, I assume this sample data was collected from 35 participants. Each row in the table represents a response from a participant. The first row indicates that the participant reported that his/her yearly income was 70,000 and he/she was not a bike buyer. The second row indicates a response from another participant who was a bike buyer with yearly income 10,000. Other rows contain similar customer information.

With the sample data in Table 3, we can estimate the population mean by computing the mean of observed values in the sample. Table 1 provides the formula to calculate the sample mean. By using the following equation, the estimate of the mean customer yearly income of the population, which we call a point estimate, is 53714.

To estimate the proportion of bike buyer in all customers, we use the following equation to compute the sample proportion having the characteristic "bike buyer":

Therefore, the unbiased point estimate of the proportion of bike buyers in all customers is 42.9%.

The manual calculation process strengthens our understanding of sample statistic computation. There are some other simpler methods.  Since I have stored the sample data in the database table "SurveyResponse", I used the following T-SQL script to compute these point estimates:

The interval estimation approach constructs a confidence interval that likely contains the true value of an unknown parameter. The other important concept in this approach is the confidence level that tells how confident we can be about the interval.

To illustrate the concepts of confidence interval and confidence level, I assume we have already collected yearly income of all customers in the population. I accessed the data through the view "vTargetMail", and then I knew the population mean 57,306 and standard deviation 32,285. For purposes of illustration, I drew 10,000 random samples of n=35 from the population and computed the mean of each sample. I obtained a list of sample means.  Then, I plotted the relative frequency distribution of these sample means shown in Figure 1. The following R script was used to implement the process: 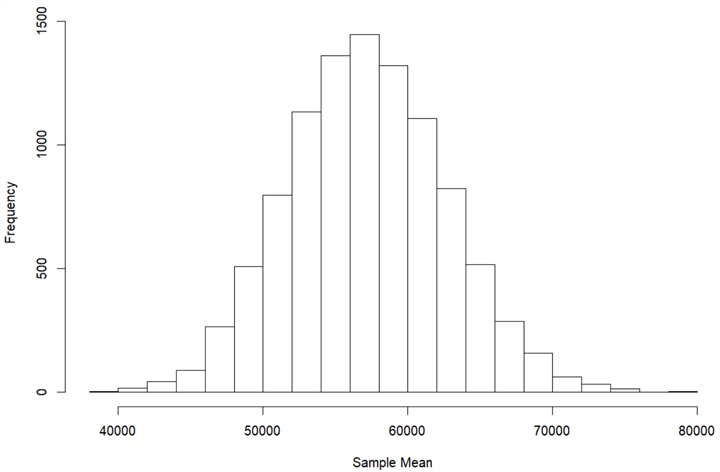 Figure 1 The histogram of sample means

According to the approximation form of the central limit theorem (CLT), when the sample size is greater than 30, the sample means are approximately normally distributed even though all these independent observations from a population do not have a normal distribution. Based on the formula in Table 2, the mean of the sampling distribution of the means is computed by:

When the population size N and the sample size n differ by several orders of magnitude, we can ignore the finite correction factor. Therefore, we use the following equation to compute the standard deviation of the sampling distribution:

, there is a 68.26% chance that any sample mean lies in this interval. 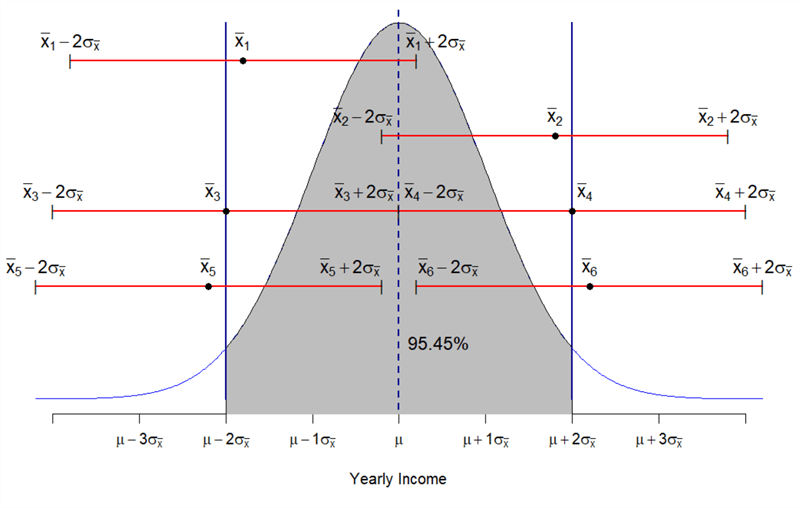 Figure 2 Sampling distribution of the means

I selected 6 samples and they have sample means

. Then I constructed the intervals

centered at these sample means. These intervals, shown in Figure 2, are defined as follows:

Figure 2 reveals that the population mean

, the intervals constructed by these sample means, such as intervals 5 and 6, do not contain the population mean. We have already stated that there is 95.45% chance that any sample mean falls in the interval

. Thus, in the long run, for all intervals constructed by

, about 9545 intervals may contain the population mean. The interval

To estimate the value of a population parameter, we construct an interval centered at the corresponding sample statistic in such a way that we can be confident that the interval contains the true value of the parameter. This process is called interval estimation. If sample 1 is selected to estimate the mean of the population, the 95.45% confidence interval for the population mean is [36569.4, 58397.4]. That is to say, we are 95.45% confident that the true mean is between 36569.4 and 58397.4.

In this tip, we want to estimate the mean value of the yearly income of all customers. To solve this problem, we have selected 35 participants randomly who reported their yearly incomes and told whether they owned a bike. The sample data is shown in table 3. I have already saved these data in the database table "SurveyResponse". Then, let’s follow these steps to construct a 95% confidence interval for the population mean of customer yearly incomes:

We have already computed these values in Section 1:

The standard error of the sample mean

Step 3: Obtain a 95% confidence interval for the z-score by using the standard normal table.

Plug the z-score into the inequality:

Step 4: Construct a 95% confidence interval for the population mean by solving the inequality.

In the 4-step process, the standard normal table was used to find the critical value of z score. R language provides commands to find the confidence interval:

The results shown in the following are almost the same as the estimation by the manual process. The manual calculation strengthens our understanding of interval estimation. We usually use modern data analytic tools, for example, Python, R, and SAS, to construct a confidence interval.

We also want to estimate the proportion of bike buyers in all customers from a sample. Here, we estimate the percentage (or proportion) of some groups with a certain characteristic [7]. When a sample unit has a certain characteristic, we consider the unit having an outcome of success. On the other side, any sample unit that does not have the characteristic is considered to have an outcome of failure. Consequently, any sample unit has two outcomes: success and failure. We can think of the sample as a collection of outcomes from an experiment that repeats the Bernoulli trial 35 times. Therefore, the sampling distribution of the proportions is a binomial distribution.

We have already computed these values in Section 1:

Step 3: Obtain a 95% confidence interval for the z-score by using the standard normal table.

Plug the z-score into the inequality:

Step 4: Construct a 95% confidence interval for the population proportion by solving the inequality.

I would like to point out that I use the properties of a normal distribution to construct the interval only when the sample size n is large than 30. Some data analysts may check other conditions, for example,

In practice, we may not always have a large sample. When we use a small sample that the size of the sample is less than or equal to 30 to make inferences about population parameters, we have two immediate problems [7]:

To solve these two problems, we use Student’s t-distribution [9].  Instead of calculating the z-statistic, we use the following equation to compute the t-statistic:

The t-distribution looks like a normal distribution, but it has heavier tails and flatter central region. The study of Student’s t-distribution could be worth another tip. I am going to use an example to show the process of construction of a confidence interval from a small sample. Professor Jost provided a dataset that contains thicknesses of a piece of white paper [10]. Table 4 shows the 27 measurements observed from a micrometer. Let’s continue to follow the 4-step process to find a 95% confidence interval for the true thickness.

Since we have already known the computation of sample size, the sample mean and the sample standard deviation, I used the following R script to compute these values:

The script printed out the results as follows:

Thus, we have known these values:

Since the sample size is less than 30, we use t-distribution with 26 degrees of freedom:

Step 3: Obtain a 95% confidence interval for the t-statistic by using the t-distribution table.

Plug the t-statistic into the inequality:

Step 4: Construct a 95% confidence interval for the population mean by solving the inequality.

Round to four decimal places:

To verify this manual calculation, I used the "t.test" command provided by R language to get a 95% conﬁdence interval for the population mean. In the existing R session, I executed the command "t.test(sample.data, conf.level = 0.95)" in the "R Interactive – Microsoft R Client(3.4.3.0)" window. The following output from the interactive window reports the 95% confidence interval for the population mean is [0.1017487 0.1043994]. The result from the "t.test" command agrees with the manual calculation result.

Guttman and Gupta [11] remind that the population should be normal or approximately normal when we use Student's t-distribution to construct a confidence interval to estimate the population mean from a small sample (n<30). However, other textbooks, for example [2], don’t have this kind of reminding.

Finally, we glanced at the small samples (n≤30). While we cannot ensure the sampling distribution of the means is approximately normal, we used Student’s t-distribution to find the confidence interval.