Describe and demonstrate the operation of a couple of AI (artificial intelligence) models for making the same kind of decision. Also, present a framework for contrasting the decisions from two different AI models.

Data science is a hot topic among computer professionals. Within data science, one of the highest value techniques is how to build an AI model to make a business decision. This tip builds on a prior one, Artificial Intelligence Programming with T-SQL for Time Series Data, that introduces a relatively simple approach to estimate when to buy and sell stocks for a gain. This tip extends the approach in the earlier tip by building two new AI models with the same goal. It also presents a framework for contrasting results from the two different AI models.

The requirement of contrasting two different approaches to modeling the same kind of outcome is a typical one in data science projects. It is common for there to be multiple guesses about what the best way is to make decisions. Making time-based decisions are common in many different contexts, such as when to reorder items to restore inventory levels or when to forecast snowy roads for tomorrow's drive to work. The approaches illustrated in this tip can be adapted for any time-based decision requirement.

Predicting what's going to happen next based on what happened recently

Time series data can track a stream of values over a sequence of time periods, such as days during which a stock market is open, daily shifts during which production is tracked at a factory, or hours between weather station readings. The trend and momentum of time series values can be revealed from relationships among their exponential moving averages (emas). You can compute multiple emas for a single time series value by computing the emas over different period lengths, such as the most recent ten or thirty periods.

In this tip, the AI models only compare emas with period lengths of ten versus thirty. At a top-line conceptual level, the two models function as follows. The code in the next section illustrates the precise process for deriving buy and sell dates as well as their associated prices.

Programming what's going to happen next based on what happened recently

This section of the tip drills down on how to program both AI models with T-SQL. You will see in this section an adaptation of the code from the prior tip on which this tip builds. The goal of the code is to save in a SQL Server table named stored_trades the buy and sell decisions made by each model. You can think of the contents of the stored_trades table as a log of the decisions made by each model.

The code for implementing both models and saving the model decisions resides in a single script. The first portion of the script appears next.

After the first portion of the script, five additional steps are performed to implement the two AI models and save the buy and sell decisions from each model. The script segment below displays code for the first two steps along with four declare statements. Each buy or sell decision is associated with a stock symbol and a date for when to buy or to sell the stock.

The script segment below displays the code for steps 3 and 4, which are two intermediate code blocks on the way to populating the stored_trades table, which is completed in step 5. The main objective of steps 3 and 4 is to populate trending_status and trending_status_w_lag1_close fields in the results set from step 4. These field values over a three-day interval are used in step 5 to compute buy and sell decisions for each of the two AI models.

The final operations for populating the stored_trades table are performed in step 5, whose code appears below.

The predecessor tip to this one described and programmed a single AI model. The analysis of the decisions made by the single model confirmed that it is possible to devise a model that projects when to buy and sell stocks so that the average sell price is greater than the buy price.

However, there are usually multiple different ways to specify a model for making decisions. Another worthy question to ask and answer is which of two different AI models yields better decisions. This section of the tip analyzes the data in the stored_trades table to show how to assess for a sample of buy and sell decisions which AI model was most successful at finding sell prices that exceeded buy prices.

You can display a select set of column values for all the rows in the stored_trades table with the following simple script. These columns bear directly or indirectly on the buy-sell decision rules for the first and second AI models.

The following screen shot shows an excerpt from the results set from the preceding script with some markup to highlight specific features of the log in the stored_trades table. 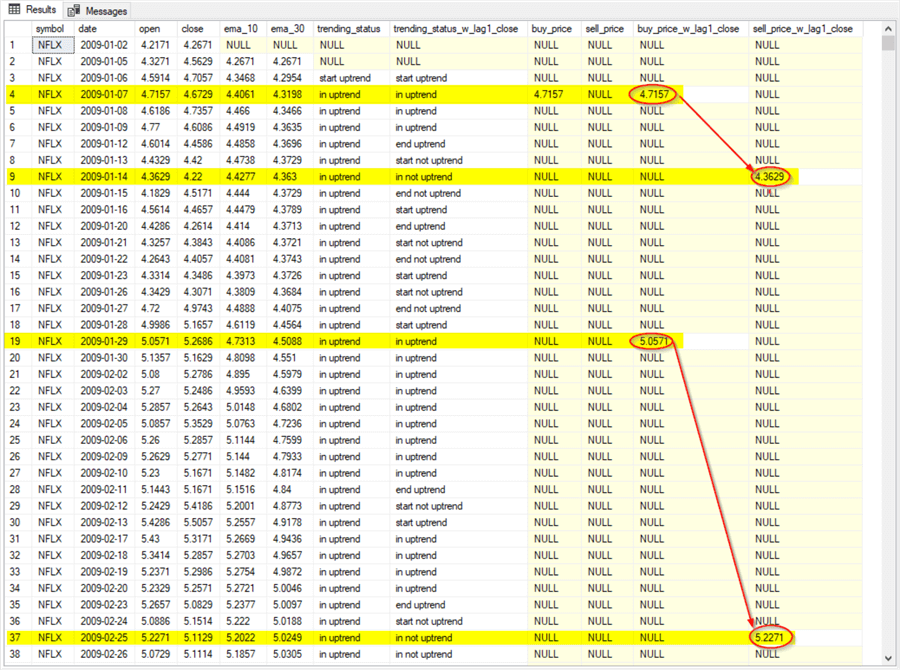 The next screen shot shows another excerpt from the results set for the preceding script with the first sell date and price for the first decision from the first AI model.

You can collect buy and sell prices for any collection of trades for each symbol being tracked. The analyses examine results for four symbols: BKNG, NBIX, NFLX, and ULTA. You can also choose any subset or all the trades for any symbol with each model separately. An Excel workbook was populated with excerpted values for some early trades from the preceding results set. In addition, analyses were performed on the values copied to individual workbook tabs for each of the four symbols tracked in this tip.

The following screen shot shows the workbook tab for the NFLX symbol. 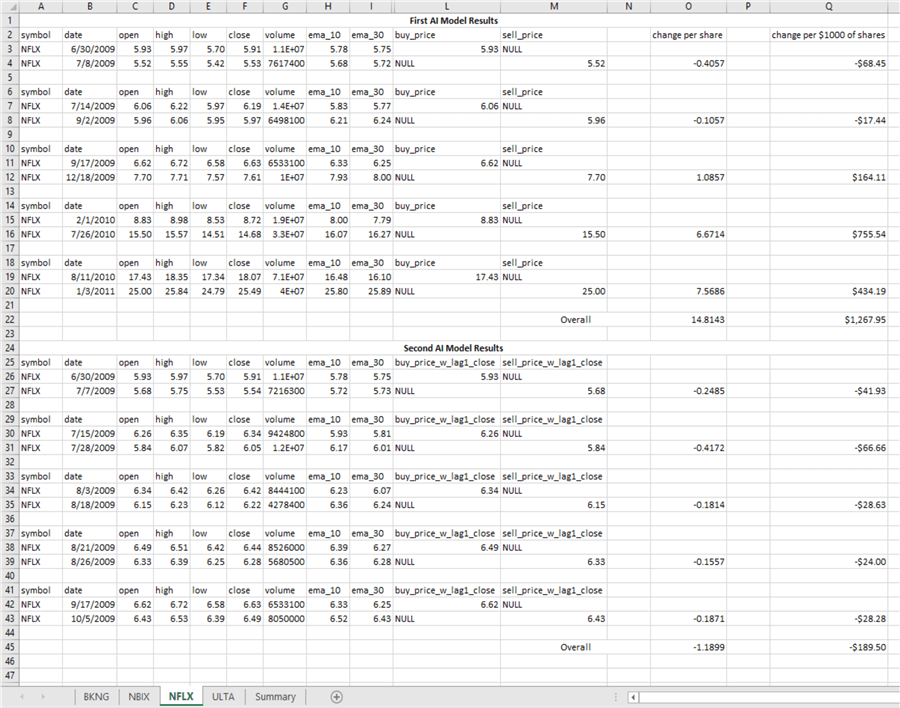 Results from the Summary tab displays individual symbol and aggregate results across all four symbols for both AI models. The values from this tab appear below.

This tip presents a small sample of the total results that could be provided. The framework demonstrated in this tip can be applied to all, or any subset of, trades from any set of symbols.

There are at least four next steps for this tip.

The download available with this tip includes four files to help you perform the next steps described above. Here's a brief description of each file in the download.