How to Compare and Combine Artificial Intelligence Models with T-SQL

Please present some T-SQL code on comparing artificial intelligence models to guide decision-making. Also, demonstrate how to combine two models into a new model to reveal issues for combining models and to determine if a combined model performs better than its source models.

Previous tips in MSSQLTips.com demonstrated different approaches to calculating, with T-SQL, buy and sell recommendations for stocks with technical indicators for stocks. This kind of application illustrates artificial intelligence because a computer program (that can be written in T-SQL) rather than a human recommends when to buy and sell stocks. Each previous tip about buying and selling stocks focused on either introducing or improving the performance of a single technical indicator.

Human decision-making can be modeled - particularly when the focus is on decisions that are frequently performed and for which there are rules based on data. Examples of these kinds of decision-making include

Each of these examples puts resources at risk for a potential gain. In the case of buying and selling a stock, the gain comes from the sell price being greater than the buy price. In the case of evaluating the credit-worthiness of potential customers, the gain results from reducing the amount of loans that end in default. For the store location task, the objective is to decide on locations that generate cash flow greater than or equal to a required amount for store viability.

When humans make decisions about options for which there are decision rules based on data, then these decision-making tasks are candidates for replacement or assistance by artificial intelligence models. The models can automate the processing of data for options according to a set of rules and recommend a decision. When there are different reasonable sets of rules about how to decide, then the outcomes from the rule sets can be compared. Also, if some rule sets work better in some scenarios than others, then different model outcomes can be combined into a single model outcome set to optimize automated decision-making based on multiple rule sets. This tip demonstrates these tasks for deciding about when to buy and sell stocks. However, the general approach applies to any kind of decision-making task where rules are used to recommend decisions about options based on data.

An introduction to the original five artificial intelligence models

The artificial intelligence models within this tip are based on three technical indicators:

The code for this tip pulls an objective sample of ten stock symbols from the list of all NASDAQ stock symbols that were collected for a database of historical price and volume data initially presented in a prior tip. All comparisons across techniques for calculating buy and sell date recommendations use the same set of ten symbols. The objective sample is based on the following rules for selecting stock symbols from the AllNasdaqTickerPricesfrom2014into2017 database.

Here are some links that present T-SQL code for computing the three technical indicators and/or how to use the indicators to derive buy/sell recommendations.

The resources for implementing each of the five artificial intelligence models include the database named AllNasdaqTickerPricesfrom2014into2017 and several script files for generating buy and sell recommendations derived from each model. The Next Steps section within this tip provides step-by-step instructions on how to download and operate the resources to develop the recommendations, compare the recommendations from different models, and combine two different models to generate outcomes better than either of the original models.

Processing the results from the original five artificial intelligence models

The temporary tables with buy and sell dates and close prices for each artificial intelligence model have the same form factor, but the contents are different. This section starts with a quick examination of temporary tables for the trend up trades model and the rsi cycles with macd ends model. Both models draw on the same underlying historical stock close price data, but intermediate data and data processing rules are different as specified in the preceding table summarizing the original five artificial intelligence models.

The next screen shot shows the full set of twenty-seven valid buy/sell cycles for the rsi cycles with macd ends model. As the script at the top of the screen shows, the rows in the Results tab are from the ##close_changes_with_macd_ends global temporary table. 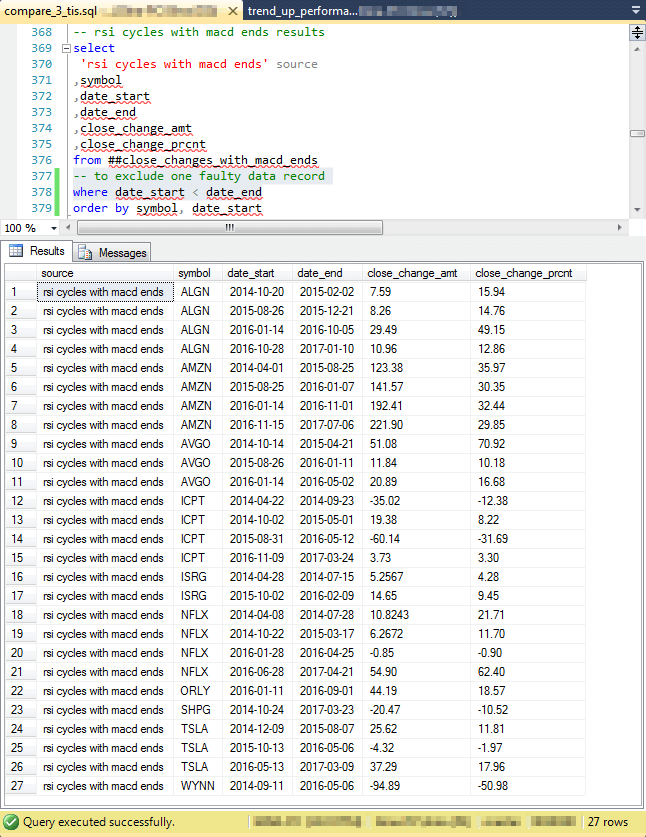 Here is a screen shot that displays the result set from the preceding query.

Another helpful perspective for comparing model results is to list the top and bottom ten buy/sell cycles across models. This can highlight which models are capturing the best and worst outcomes for different symbols. Also, it may provide insight about which two models to combine to get the most favorable outcomes (those with the top percentage gains).

You can show the top and bottom ten by sorting the buy/sell cycles by their close change percent values. Before extracting in two separate queries the top or bottom ten buy/sell cycles, you can simply show ten rows in the result set sorted by close change percent. Then, you can alternately view the first ten rows and the last ten rows from the result set. The next two screen shots present these Result tab views; the first screen shot is for the top ten, and the second screen shot is for the bottom ten.

I selected the rsi cycles with macd ends model and the trend up trades model to form a combined model. The process for combining model outcomes works as follows.

This section begins by reviewing T-SQL code that can create a combined set of recommendations across both source models. The section closes with an analysis that compares the results from the combined model with each of its sources.

The code starts by creating a temporary table named #temp that draws on a table from the AllNasdaqTickerPricesfrom2014into2017 database. The table has the name Results_with_extracted_casted_values, and it contains historical close price data for all symbols traded on the NASDAQ stock exchange, including the ten stock symbols tracked in this tip from as soon as the first trading date in 2014 through as recent as November 8, 2017.

The next screen shot shows another selection of rows from the second buy/sell cycle beginning in the bottom of the preceding screen shot.

The next screen shot shows the last ten rows of the buy/sell cycle depicted in the preceding two screen shots.

Here's the report generated by the preceding script.

The lessons learned in this tip are for approaches to comparing artificial intelligence models, demonstrating which of the original five models performed best, and assessing if the combined model generates superior performance to its base input models.

Here are some lessons learned for comparing models.

Here are some lessons learned from comparing the original five models.

Here are some lessons learned from comparing a combined model to its two source models.

There are three sets of steps necessary for trying out the scripts from this tip.

First, you need to download the backup file for the AllNasdaqTickerPricesfrom2014into2017 database; see the Next Steps section for a link to the backup file. The backup file from the tip includes NASDAQ historical price and volume data in its Results_with_extracted_casted_values table. Restore the backup file on the SQL Server instance for which you want to run the sample code in this tip.

Second, you need to download script files that can create the macd_indicators table, the rsi table , and the ewma_10_30_50_200 table in the AllNasdaqTickerPricesfrom2014into2017 database.

The third step is to download the files for this tip.

Finally, I close by indicating that this tip is not recommending any particular stocks, including those for which results are reported in this tip nor is it recommending any specific trading rules. The stocks reported on in this tip were selected based on multiple objective business rules. At the time that I submitted this tip to MSSQLTips.com, I and my family members held positions in a subset of these stocks. I do occasionally use selected technical indicators, including the MACD, RSI, and multiple moving average indicators, in making decisions about which stocks to buy and when to sell stocks, but I do not routinely use the precise trading rules covered in this tip.