In this article, we show how to model decisions about time series values based on performance scores using SQL code to manage and process the time series data in a SQL Server database along with Excel to model and analyze results sets. We also cover how to present top-line results comparing decisions from performance scores versus decisions from crossovers for exponential moving averages.

What is a performance score?

Performance scores report the percentage change for a set of underlying values from a start period through an end period where a period corresponds to a day or some other unit of time.

While performance scores can indicate trends over time, performance scores are not the only kind of metric for tracking changes in time series values over time. For example, exponential moving average values are a weighted function of all the values in a time series through the current period. The weight for a period depends on something called a period length. The weights are larger for short period lengths. In contrast, the weights are smaller for long period lengths. Several prior MSSQLTips.com articles describe how to compute exponential moving averages with SQL (for example, here and here).

Building a calendar for security prices within months

The script excerpt below from the monthly_percentage_change_comps.sql file contains an inner query and an outer query. Before the inner and outer queries, a use statement specifies the default database, and a drop table if exists statement removes any prior version of the performance_for_chart_calendar table.

Here are a couple of screen excerpts from the beginning and ending rows of the commented select statement at the end of the preceding script excerpt. Each excerpt contains twenty-four rows. 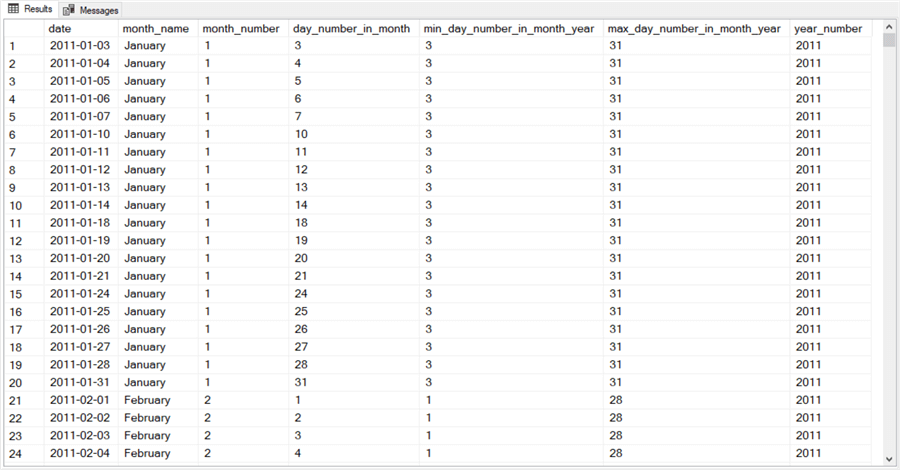 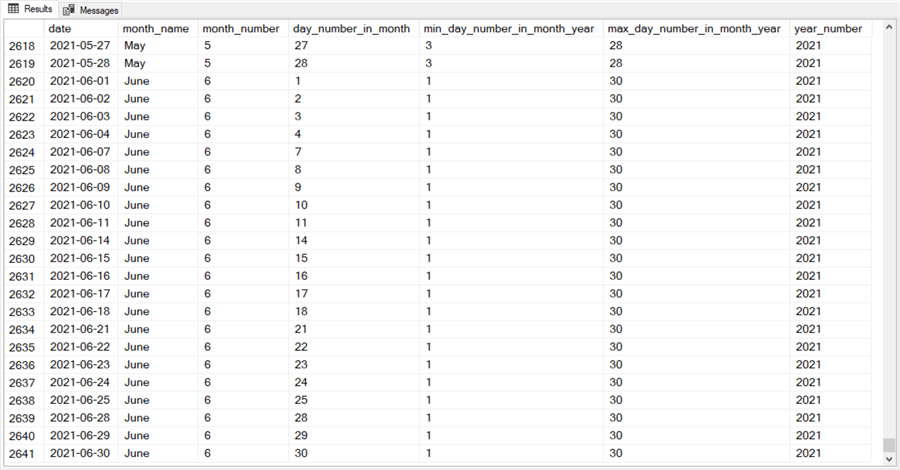 The tip’s download includes all the SQL code described in this section as well as other sections throughout the tip. The download also contains additional data to populate the monthly_performance_based_on_close table for eight additional symbols. These symbols are DIA, FAS, IYR, MARA, QQQ, SOXL, TNA, XOP. You can use these additional symbols to practice the processing steps comparing a symbol’s monthly performance to the monthly performance for the SPY symbol.

Comparing monthly performances for the SPY symbol versus a comparative symbol

The following script excerpt shows how to extract the columns and implement the join between the SPY and AAPL results sets. An outer query includes the column from each ticker’s results set and computes a new column based on the comparison of the monthly_performance_based_on_close column values from each results set.

You can find a similar SQL script excerpt for each of the five remaining comparison tickers in the download for this tip. The results set from each script is copied to a separate tab in an Excel workbook, which facilitates the final step for projecting buy and sell dates and close prices for SPY and comparison tickers.

The basic idea behind the model about when to buy and sell securities is that once a comparison ticker confirms superior performance to the SPY benchmark ticker for the past 12 months, then it can continue to achieve superior performance until it stops confirming this capability. Recall that for the purposes of this tip, we are using SPY as an overall indicator of stock market performance.

This section illustrates how to start using Excel in combination with the results set from the preceding script to implement a model for choosing buy and sell dates and close prices based on performance scores. The model setup begins by populating a tab in an Excel workbook with the results set from a script like the one in the preceding section. The following screen image shows the first 23 rows of the AAPL tab in the Excel workbook based on the AAPL vs SPY script segment in the preceding section.

The next screen image shows columns H through O for the first 23 rows of the AAPL tab. 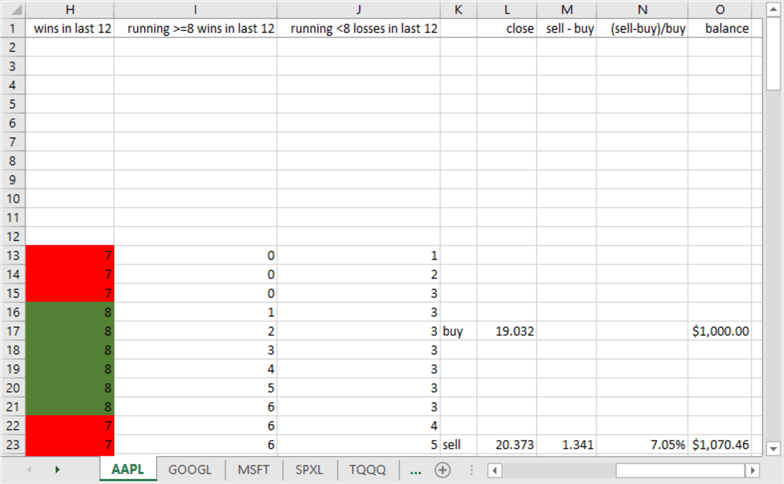 The next screen shot shows the last 41 rows in the AAPL tab. The last row of data (row 127) contains a month_number of 6 and a year_number of 2021. Therefore, this row denotes values from the last row of source data in this tip. 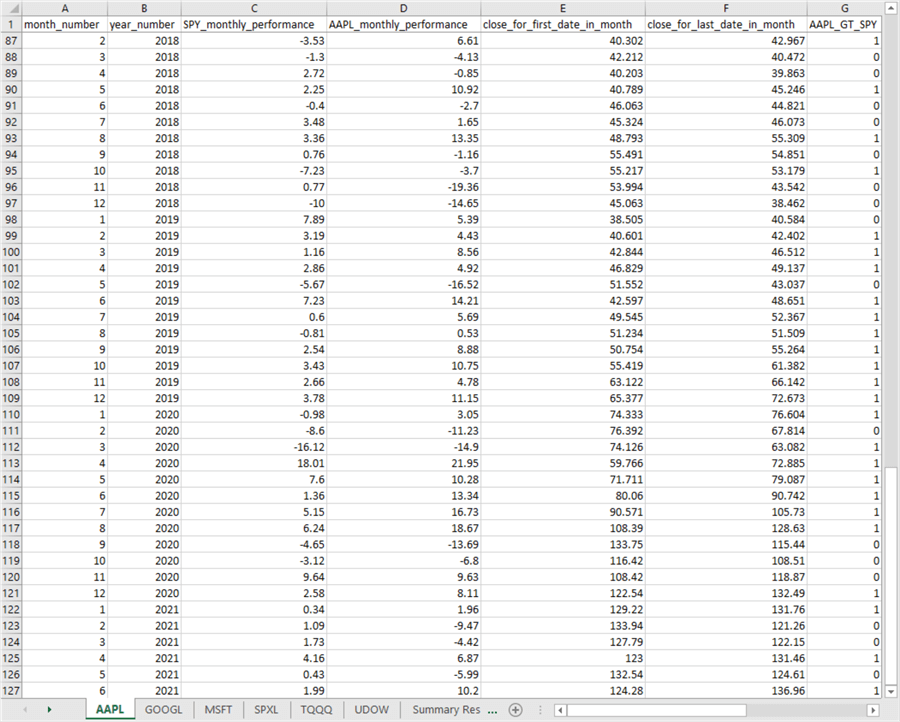 The next screen shot shows columns H through O for the last 41 rows on the AAPL tab. 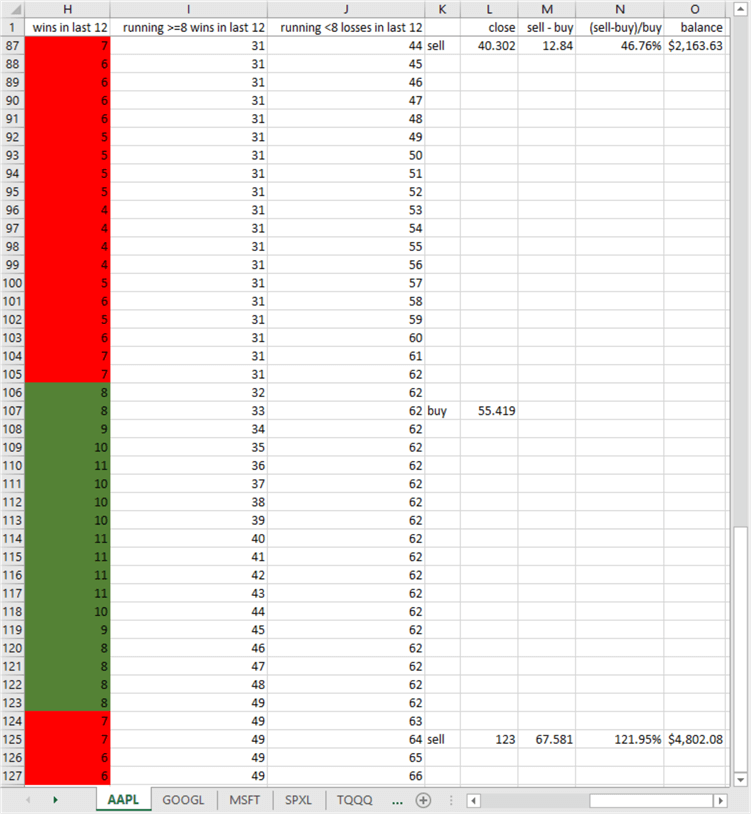 The Excel workbook in this tip’s download includes a separate tab for each of the six comparison tickers. The tab names for comparison tickers are AAPL, GOOGL, MSFT, SPXL, TQQQ, and UDOW. In addition, there is a Summary Results tab that appears below with several sets of comparisons. For example, the following screen shot shows monthly performance-based model results for the six tickers analyzed in this tip.

The next screen shot shows another excerpt from the Summary Results tab.

For the limited summary results examined here, the ema-based model seems to be a better one than the performance-based model for generating buy_sell dates. On the other hand, performance scores are excellent at showing trends – especially over longer time periods. 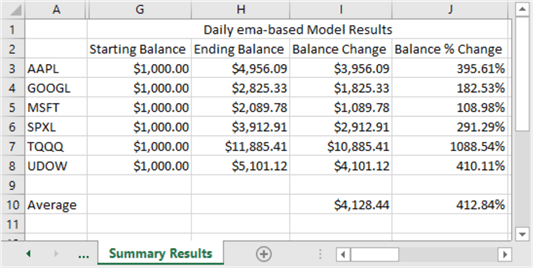 This tip presents a demonstration of how to model decisions about time series data. The decisions within this tip are about when it is a good time to buy and sell financial securities, but the model design can readily be extended to other use cases, such as whether to forecast a rainy day or a hot day tomorrow. All you must do is compute performance scores for one or more time series and then use the workbook model to project decisions based on performance scores.

The download for this tip has just three files.

You can verify the operation of the sql code and Excel workbook expressions with the help of the download file. You can also adapt the Excel workbook model framework to other tickers and their historical data, which are available in the csv file. Finally, you can apply this framework for making decisions about any custom time series your company tracks.