I am a SQL professional who was recently assigned to help support a team that focuses on building data science models for financial securities. Please provide a walkthrough of typical steps for building time series models with SQL for financial time series data. Demonstrate the application of the general steps in a specific example. The team I recently joined often uses MACD indicators, so coverage of that topic would also be helpful.

Many different data science models predict when to buy and sell financial securities. Often, these models are based on stock price patterns and/or security price indicators. Examples of stock price indicators previously covered in MSSQLTips.com for model building include MACD, RSI, or moving average crossover indicators.

Instead of focusing on a particular type of indicator, this article presents a framework for data science time series model building that may be appropriate, with some adaptation, to many types of indicators. The code used in this article utilizes SQL. While SQL has no specialized features for model building, it may often be the case that basic time series data are stored in SQL Server (or another SQL database engine). When this is the case, time series models can be represented in the tables processed by SQL code. When this is not the case, it is often easy to migrate data from another source to a SQL database engine. You can find examples of implementing the migrations in these references:

It is common to express a time series model where a value or an action for the current period relies on an outcome in a prior period. For example, this tip considers models for trading securities where buying a security in the current period is indicated by a signal to buy a security in a prior period. The security can be held until the model discovers a sell signal that indicates the desirability to sell a security to retain accumulated gains or minimize any further losses. The number of periods between buying and selling a security can vary from one buy-sell cycle to the next and across securities. The role of the time series model is to find when to buy and sell a security so that the model user can accumulate wealth over a succession of buy-sell cycles.

Key Steps in the Modeling Framework

The key steps for evaluating a model with the framework from this tip can be easy to identify and perform with SQL. This tip includes SQL code examples for all the key steps for building a time series model.

This tip focuses on the first three steps. These are the steps for building a model. The computational process for price indicators will vary depending on the indicator your model relies on. The SQL code for the time series model depends on the model logic for mapping price indicator values to buys and sells for a security.

The process walkthroughs in this tip provide enough context on the model building framework to apply to any time series data you prefer to use instead of just the data from this tip. The examples in this tip sacrifice performance and generality to emphasize clarity and ease of use for applying the framework.

A subsequent tip will highlight key issues with the fourth step for evaluating time series models over multiple ticker symbols and time periods.

The model for this tip depends on the open and close prices for a ticker symbol on daily trading days. Relationships between MACD indicator and signal indicator values determine when to buy and sell a security, and these indicator values are based on daily close prices. The relationships between indicators can specify the dates for buy signals and sell signals for a buy-sell cycle. The model also needs daily open prices because the model buys a security on the day after a buy signal and sells on the day after a sell signal. Therefore, the first step is to obtain historical open and close prices for a ticker symbol across the trading dates for which a model is being trained or tested.

Here is a T-SQL script for gathering the open and close prices required by a time series model for securities trading.

Here are two excerpts from the #temp_for_ewma table.

Here is the code for generating the transformed ewma_12 and ewma_26 column values from place marker values to computed values.

Here are two excerpts from the #temp_for_ewma table after the transformation performed by the preceding code segment. The top screenshot is for the first ten rows with transformed ewma_12 and ewma_26 column values, and the bottom screenshot is for the last ten rows in the #temp_for_ewma table. These screenshots below correspond to the screenshots at the end of the preceding section. They have identical values, except for the ewma_12 and ewma_26 columns.

There are three types of MACD indicators.

The listing is provided here for your easy reference. The following code segment is part of a listing that depends on the scripts from prior sections.

Here are two excerpts from the results set for the preceding script. These two excerpts correspond to those at the ends of the "Migrating historical time series price values for a security to a database table" and "Computing ewma_12 and ewma_26 for MACD indicator values" sections. All three pairs of excerpts present values from the first ten trading days and the last ten trading days. Each section adds a new set of columns to the results in the #temp_for_ewma table.

The excerpts below show all the columns needed (and more) for building a model based on MACD indicators. As indicated above, the model in this tip uses just the columns for the MACD and signal indicators. The following section shows how to create one last set of columns that allow the prediction of buy dates and sell dates based on the mapping of the indicators to model logic for determining when to buy and sell a security.

Mapping MACD Indicators to Buy and Sell Actions for a Security

Until this point in this tip, the focus has been on generating the MACD indicators for a set of source data along with open and close prices for each trading day for a symbol. This section of the tip pivots to mapping MACD indicator values and signal indicator values to buy, hold, or sell actions for each trading day. In the context of this tip, a hold action is just the action for a trading day between the buy action and sell action within a buy-sell cycle. These three actions (buy, hold, and sell) adequately describe simple trading models. These simple trading models do not account for short selling or options trading for financial securities.

The same MACD indicators can be processed in various ways to specify buy, hold, or sell actions. In fact, this prior tip uses different model logic than that used in the current tip for mapping the MACD indicator and the signal indicator to buy actions and sell actions. A subsequent tip will drill down on quantitative comparisons of outcomes associated with the model from this tip versus the model from the prior tip. The main purpose of this tip is to present this second MACD model in a way that empowers SQL professionals and data science engineers to implement whatever model logic seems most promising to them.

The model in this tip is built around two ideas: buy just after the MACD indicator rises from below to above the signal indicator and when the MACD indicator is concurrently below its centerline value so that the momentum (as assessed by the MACD indicator) has not already reached a level well towards the end of a buy-sell cycle. These ideas can be denoted with three column values.

The following script populates the preceding three columns and describes how to use the column values to make buy action and sell action decisions.

Here is an excerpt from the preceding script that shows the beginning and end of a winning trade. 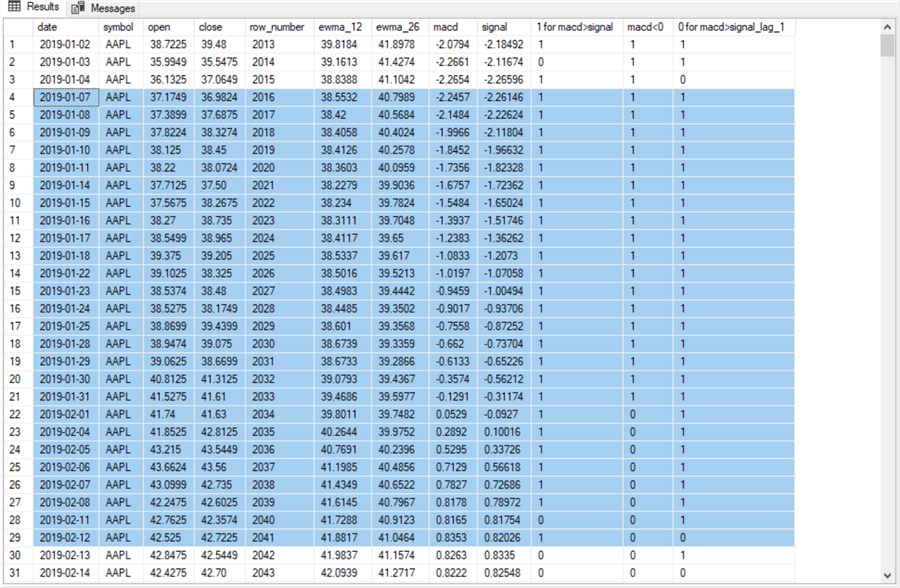 Columns like 1 for macd>signal, macd< 0, 0 for macd>signal_lag_1 can be critical for mapping MACD indicator values to a table. The values in these columns are inputs for model-based decisions about when to buy and sell a security. However, they may be unnecessarily complicated for someone who just wants to know when the model says it is the date to buy or sell a security.

Consequently, it may be helpful for some model users to have access to columns that indicate when to buy and sell a security without any references to expressions based on MACD indicators. The following script displays buy signal rows, in addition to buy action and sell action rows. The buy signal row is critical because it points to the beginning of each buy-sell cycle. As indicated previously, the buy action and sell action rows designate the start and end of each buy-sell cycle.

Here is the code for populating buy signal, buy action, and sell action columns. It is a little lengthy but not very difficult to understand for a motivated reader. The following bullets list the key steps in the code.

Perhaps the best way to illustrate the operation of the preceding code excerpt is with a few examples.

The rows from the #for_second_macd_trade_model_with_sell_action table for the first buy-sell cycle plus its preceding buy signal row are shaded in the screenshot below. 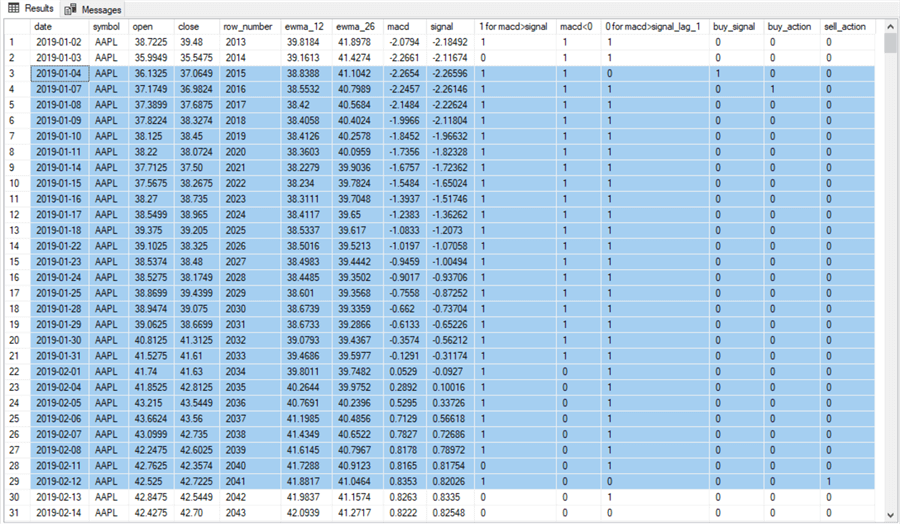 The second buy-sell cycle rows with its preceding buy signal row are highlighted in the following screenshot.

The third set of buy-sell rows with its preceding buy signal row are highlighted in the following screenshot.

The download for this tip contains the completed T-SQL script for a model in one integrated SQL file. The edition of the script in the download lets you run the whole script. You can also edit the script to run it one step at a time, as described and illustrated in the text and screenshots within this tip. The download also includes a CSV file with the source_prices table values for the AAPL ticker symbol. You will need to migrate these comma-separated values to the source_prices table before running the script in whole or in part.